Who said anything about it being a requirement?

What was everyone’s thought on that; and should Clemens allow us to upload a picture

Also, people like @TheContractor on console have found ways to do decent pictures

) having the option there kind of makes you feel forced to make a good cover for the contract and not everyone is an artist or even uses graphics software. I don’t think I’m a great example for console either, I’m the 0.00001% who obsesses over the presentation of the contract, and personally if I knew one of them would get put in the game permanently I’d 1. Obsess even more about small details and 2. Probably create less featured contracts submissions

It’s annoying it isn’t an option because some members create outstanding art for their contracts, but I just don’t think it helps for the wider community and engagement

My feeling was the discussion was going in that direction. It’s easy to see how, if pictures would become part of featured contracts, they would also become an element in the contract selection. An evolution I would oppose.

You’d hope IO would be responsible enough to put someone in charge of selection that doesn’t just focus on the picture :S Heck, some people accuse the selection of being based on that already, even though the picture doesn’t even get put in the game in current system!

Point was that featured contracts started with player contracts, and somewhere 1/3rd of the way io created a few themselves. So it’s not like they switched from creating them themselves and then later resorted to community made contracts.

It should absolutely not be a requirement.

I take it you weren’t a fan of their contracts?

I dont fully remember them just by name, but the nice clean and easy was just as the title suggested and imo not that interesting.

Sons of siam was fun if I remember correctly.

Didn’t know, that when you shoot the projector, Orson will react to it, same like he does when breaking his drink and blame it on Max. However, he says “screen is all broken”, but there is no screen, only projector on the ceiling, so that would be quite a jump Max would have to be capable of.

IIRC, the reason that we had some IOI created contracts in the game (at least H1) at launch was because we need to pass certification with the console makers before they will allow us to release the game - and that means that you can unlock all of the trophies / achievements. Seeing as we had a trophy for completing a Featured Contract, we did it that way.

However, Featured Contracts were always intended to be community-led, which is why we’ve invited community members into the studio to get their contracts ready for launch. Some of the ones you’ll see created by me were also created on those days.

I didn’t just find out about this, but I thought it was interesting when I saw it.
When I saw the undercover bodyguards in hitman, I thought they were just civilians with guns. I thought IOI was referencing the second amendment

If console members could have a free floating camera

mode… that would take care of all of this. Just make it so you can’t use it till you are mastery level maximum on that level.

Unless someone can disprove it, there’s only one civilian in all of Sapienza who has just a moustache, and it’s this man 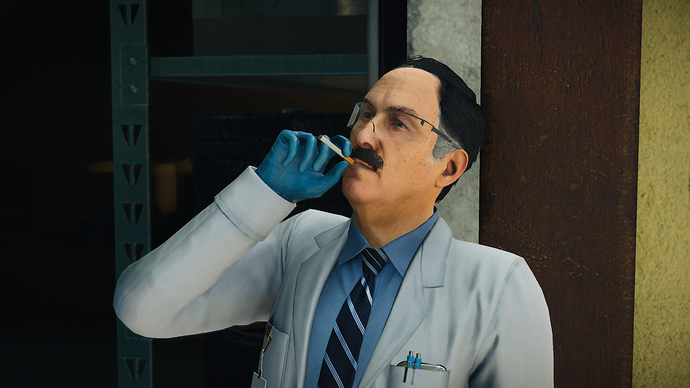 I can look on other maps instead, but I was wanting World of Tomorrow because it has the Stylist disguise which is very underutilized.

I thought the scientist talking to the gardener in the wine cellar, and his body double in the lab have mustaches?

Doesn’t Mario have one?

I found an article discussing the various little things you can do in some of the H2 locations. We know most of them, but apparently 47 can lose the drinking game with Sierra, and consume the hot sauce himself! That I’d like to see!

It’s underwhelming. Especially compared to what happens if you hide in the drop down alley behind the Art Deco hotel and let Sierra spot you.

Think there’s a challenge linked to 47 losing that drinking game.

They’ve actually got a special reaction for that possibility? Wow! Or does she just scream and run for her guards?