I wish they’d show him relying on his looks more in missions. We already have NPC’s like Jackie Carrington commenting on how hot he is. Why not have him use it to his advantage and flirt his way into somewhere he isn’t supposed to be, the way he does with his voice?

nice, feel free to @ me when its ready. i have to do something like this too, sometime.

Sure thing, it should be done today / tomorrow since I’m on “the setup” which is super easy. You can finish it with saving Smith in SO in less than 5 minutes.

Why not have him use it to his advantage and flirt his way into somewhere he isn’t supposed to be, the way he does with his voice?

He may have the looks and the voice but he doesn’t have the personality that can flirt with someone. If Diana would one day drop all of her clothes on the floor in front of 47, he’d be like “Just send me the briefing” and leave the room.

I absolutely hate 47’s face is C47 - Contracts, he looks silly and goofy, its impossible for me to take seriously. Its so long and slim its like a squashed pancake with a hilariously mean face.

He may have the looks and the voice but he doesn’t have the personality that can flirt with someone.

What about the whole “wrap your lips around this” line he does when he’s a food vendor?

If Diana would one day drop all of her clothes on the floor in front of 47, he’d be like “Just send me the briefing” and leave the room.

If she was that blunt about it of course he’d panic and bolt. Who is this Diana and what happened to the one person in the world who treats me like a human being instead of a tool?

More for me. She can step on my neck.

it was posted once or twice here, i sadly dont remember where to find it tho.

More for me. She can step on my neck.

Diana is not a classic beauty. She’s very pretty, don’t get me wrong, but she looks more like a strict teacher and I don’t know if she is someone you would invite for drinking a coffee and having some smalltalk. Maybe she’s more like the type who would wallop your butt with a paddle.

There’s a lid for every pot…

Not exactly like Absolution but something similar. I know it’s not a popular opinion

I legitimately wonder if 47 is asexual.

Most definitely. 47 was pretty much “programmed” from childhood to be a killing machine, similar to the Terminator but still being made out of flesh and blood. Human emotions and behavior is not part of his programming.

I’m not calling her ugly or anything, she’s simply not my type. Nothing wrong with that right

Human emotions and behavior is not part of his programming.

Who programmed him to stomp a runway then

She’s very pretty, don’t get me wrong, but she looks more like a strict teacher

Did you see that LBD from the trailer though? THAT is definitely not PTA approved lol

I legitimately wonder if 47 is asexual.

That’s a perfectly supportable read on his character, and definitely one my ace friends prefer. To each their own.

I understand that the devs wanted the game to be dark and gritty but having ALL missions play during the nighttime and always raining/snowing just gets boring and everything starts to look samey.

Agreed. I mean there is a reason for it, the atmosphere is great, has its charm, and the rainy night suits a lot of the environments/missions perfectly (HK, Beldingford Manor, and Deadly Cargo in particular), but the lack of variety gets tedious and it all looks the same after a while.

Out of the 12 missions this game has, only The Meat King’s Party , Beldingford Manor , Rendezvous in Rotterdam , Traditions of the Trade , Slaying a Dragon , The Seafood Massacre and The Lee Hong Assassination are good and can be completed in multiple way.
The rest of the either offer no multiple routes, level are way to big and empty and / or are heavily scripted.

Honestly, I´d be ok with adding Deadly Cargo and even The Bjarkhov Bomb to the list. Deadly Cargo (which is actually one of my favourite levels in the game) has quite a few ways to go about it, though due to its somewhat scripted nature it´s often more about adapting rather than manipulating. Rendezvous in Rotterdam on the other hand always felt like the more empty/boring one to me. The Bjarkhov Bomb has variety as well, though some of the methods require a fair share of waiting, and it´s mostly offset (and off-putting) by the size of the level (which to me feels more tedious than many of the large new levels ever would).
No argument about Asylum, Wang Fou, and Paris. They have their purpose, but in terms of replay value, they don´t compare.

where the fifth? Where’s M̶r̶O̶c̶h̶o̶a̶ ̶Pablo Ochoa and his level?

I remeber reading back in the day that they wanted to include it, but decided not to. Not sure about the reason (the more action nature of the original?). I too am one of those who have always wished they had done it though. Really wanted a properly done remake of that one (rainy jungle night would also be cool). We did eventually sort of got it in the form of A Vintage Year and Three-Headed Serpent, but it´s just not it without Pablo “Totally-Not-Tony-Montana” introducing you to his little amigo…

Speaking of remakes, what did they do to Deadly Cargo ? Not only is this mission heavily scripted but they managed to combine 2 levels from C47 into one made a Frankenstein of a level.

Like I mentioned above, I actually really like this one, so… I can understand skipping out on/shortening the Gunrunner´s Paradise part, since that one required you to kill a bunch of bikers just to plant a GPS, which just wouldn´t work here. And let´s be honest, Gunrunner´s Paradise is scripted as well, since Arkadij always eventually arms the nuke and scrams, giving you a limited window to kill him, so no difference there (not to mention getting through the harbor can be a chore). Deadly Cargo offers a lot more variety.

Most importantly, where is everyone’s favorite circus midget freak, Ivan ?

Lol, well since it´s just 47´s feverish memories of past missions, could be he just subconsciously supressed the little choleric bastard

My main issue was how there was always a sure way to take out the target was based in one of the few randomized spawn points. I also never got that much interference from my opponent.
I’m actually very curious about what a tournament looks like, can you link some footage?

Finals from last tournament with live commentary from cj and me. 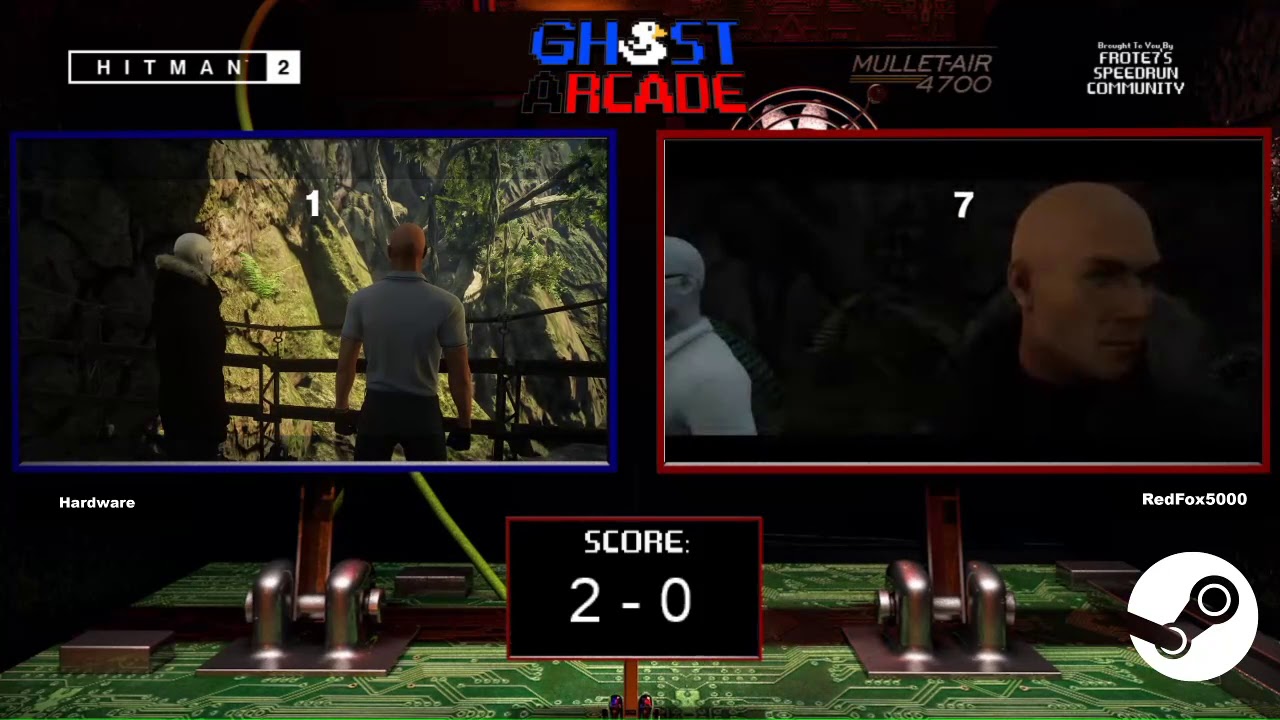 I think IO lost the rights to the models or something between games and/or had to go with another design team. But the Diana from the trailer looks like a happy in between point, fresh looking but not like she’s in her 20s.