What is some hidden dialogue that you discovered recently?

didnt discover recently, but i really like the dialogue in Sgail where they talk about Dance with the Devil (blood money)

Where exactly is that? Never heard it, (or at least can’t recall) I’d like to check it out.

it’s right when you enter the castle gates, to the right. i think there’s a waiter and a guest leaning against a pillar, they’re talking.

Cool. Thanks bro, going to go find that now. I absolutely love when they intertwine the games together like that. Just like how they mentioned the Shamal Casino in the briefing in the one sniper map. Awesome stuff!

Some time ago I discovered a little conversation between lady who is infected first in Patient Zero mission and one of the guards.
I still haven’t a chance to listen all the variants of dialogue, but there are minimum two variations of their dialogue

I’ve dug around in Hitman 2’s cutscenes, and I found that there is a very very early audio file that 47 was supposed to read. There is no sound for it unfortunately. All I can get is the subtitle text. But it reads “It’s summer - about mid day. The people here are dependent, pious, and gullible. Going through the garden shed, I’ve put my past down to come back home. This calm life I may have wished i was created into. A troubled soul and skilled hands has found a sanctuary here in Gontranno. It’s about time I head on over to the church

This calm life I may have wished i was created into

I heard that in his voice from that game, speaking like he does in the confessional

Going through the garden shed, I’ve put my past down to come back home

I wonder what he meant by ‘home’?

A troubled soul and skilled hands has found a sanctuary here in Gontranno.

That gives even more meaning to the mission name “Gontranno Sanctuary”

If i have time, I will post screenshots of the subtitle text.

Credit to @bourbonade for starting and @Rimland for finishing the hunt. Here is Grey’s Informant dialogue: 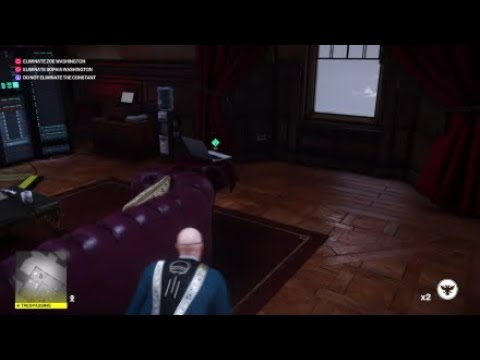 So in order for the pre-Sgail cutscene to make sense, this guy has to relay the existence of the kill switches to Grey but somehow Diana ends up learning about it first. This has some juicy implications.

Or maybe that guard told him and Grey was like “yeah thanks, I already know about the killswitch, dumbass” and that’s why that guy has to find some more informations to pay his depts?

I don’t think so. He specifically mentions reporting in earlier we don’t have any other suspects for who the contact on the island is. The information that Zoe is trying to find out who sent the instructions and that the switches arrived that morning seems kind of trivial, not something that would count as repaying a debt in and of itself.

I just watched the briefing again. Diana says “our source on the island just made a critical discovery…” So maybe he isn’t just Greys informant? And so maybe Diana answered the call from the informant first, telling Grey and 47 what he said. So maybe she really has access to Greys phone.

not really secret but something worth sharing if you go up to the guard in whittelton creek either guarding the gate construction site or the one at nolan cassidy’s house
he will sometimes say this:“sorry sir can’t go through here ya know orders,a_hole you will never get through here as long as im alive now get the F___ out of my face” in other words,he’s rude

). Without them, I/we would still be running around Sgail like lunatics

Further on the topic of this thread, I´ve only recently “discovered”:

Some of these are not exactly hidden, but it made me realize how little time I´ve actually spent stalking the targets in H2…

Good catch with that little briefing ´inconsistency´! The information could´ve also been reported to Olivia electronically (as it´s likely she´s on the receiving end of intel for Grey either way), in which case it´s possible she informed Diana first cause Grey was not there at the moment. As @Mini points out, the briefing says our source, so even though it´s technically Grey´s informant, the info he provides is made accessible to other relevant people (i.e. Olivia/Diana). Or it may be an oversight…