Which do you think is the most ingenious design among all the maps of WoA?

In my opinion, I think it’s Mumbai. Because its map is huge and interactive, I think it is the best. As for the map in H3, I think it is far less creative than the previous two works. At least it didn’t brighten my eyes. For example, the size of Chongqing map, is this suitable?
I understand and understand that the map design in H3 is to fit its theme. After all, the theme of H3 is darker than H1 and H2. We can see it from their “slogan”.
H1:Enter a world of assassination.
H2:Made the world your weapon.
H3:Death awaits.
The first two works really introduce a killer who travels around the world, while H3 seems to introduce the killer’s dark life experience. So smaller maps and compactness fit H3. But it will sacrifice a lot of openness.

As for the map in H3, I think it is far less creative than the previous two works

I don’t agree tbh. H3 has a lot of gimmick-ey levels; moreso than the previous games combined. Dubai is a semi-restrictive building (justifying the small level design), Dartmoor is in the middle of the british countryside and the level plays out like one massive murder mystery.

Berlin has ICA agents on your tail, and you have to dispactch of them, making use of AI behaviour not seen in WOA (they are actively aware of your presence and are super-enforcers in all but one suit). Chongqing is also very tiny for what it is, so I do agree with you here, but even then, the level has keypad codes you need to remember, as well as a unique exiting experience when playing in story mode.

Mendoza has Diana actively help you. That isn’t in any other WOA game, and is honestly something I was blindsided by that. And Carpathian is an end-boss set a top a moving train, a means to end the story, and is a fun little speedrun to do every now and again.

While I agree there are less maps that are open (as you said Chongqing is very guilty of this), the story justifies a lot of the levels being small. I won’t say it’s a non-issue, though.

I think Sapienza & Mumbai.
Chongqing its wasted map and very strange design, but i like the colors .
H3 are the most colorful maps but tiny and boring very fast to explore.

It has to be Berlin right?

I can easily say Berlin because as a concept it’s something I could never imagine working in the WoA fashion, but it does, and impressively well.

It’s easier to create a quintessential WoA level in a setting like Sapienza, but to make it work in an active nightclub inside a forest and seeking/identifying armed targets was a helluva job in level design.

In this case, I would say Mumbai or maybe Berlin ?

I mean without a doubt it has to be Hokkaido when it comes to all maps in the trilogy, with a completely unique and never before seen door mechanic bringing higher priority to the disguise system without fully sacrificing traversal for suit only?

Not to mention the uniqueness of Soders himself as a target, with interesting Assassination methods that provide numerous approaches, including the indirect method of destroying the transplant organ so you never even have to lay eyes on Soders himself? With some very good original mission stories as well to boot, such as Portman with his plastic surgery and the curator with his brain implant, and the surgeon proxy kill as well!

Altogether it makes for one of the most unique and memorable missions in the entire franchise, hands down.

As for Hitman 2, probably Miami with Sierra Knox starting on the race track, plenty of interesting methods to take her down in the race, Miami also has a nice scale thats large with ample opportunities to set up interesting contracts and escalations within but doesn’t feel bloated due to the tunnels allowing easy ways to get across the map.

Hitman 3 would probably have Berlin as the most interesting with its interesting and thematic original start and target identification system. It may lack in the department of unique assassinations but it makes up for it in the freedom of target diversity and methods to approach the level.

Definitely agree with Hokkaido. It was also the map that introduced me to a “no loadout” approach.
Really felt like you were sneaking into a special facility

I agree with Hokkaido as well.

It’s very unique from an aesthetics level too. A lot of hitman levels are either location based like heres a specific city or country, or they are concept based, like heres a fashion show or hotel or bank with every level being somewhere on that scale. The bank could take place really anywhere, it being in new york adds a little extra character but isn’t what you would imagine if someone said “New York Level”. Sapienza is very much hey you’re in Italy, and I doubt anyone thinks of it as the “church level” or the gelto shop level or the level with a mansion level.

Hokkaido is super unique. It’s not really the hospital level or the resort level, it kind of just feels like it’s own thing. I’m sure people call it the hospital level, I just mean they put a lot of creative work into giving it a unique feel.

It’s also feels like the first time they put in so much of the futuristic feeling touches in the new hitman games that show up again later. Sgail always felt to me like it was building off the aesthetic of Hokkaido and Haven feels like it took a lot of impression as well, both in it being a resort with 4 rooms, one of which belonging to Jason Portman, as well as the secret facility having a Hokkaido vibe.

I know there are the either labs in World of Tomorrow, but Hokkaido feels like it set the standard so running into futuristic looking stuff in Miami or China doesn’t feel out of place in a game that mostly has you in exotic or old world feeling places.

Just the idea of them making a hospital level and then putting it in the mountains, in Japan, and then saying Hey let’s put a sauna and a restaurant and have you start in your own room with a view looking off the side of the mountain and there’s a morgue area where you can trash bin a targets heart, and helipod, and a area that has an AI you can mess with while wearing a baseball uniform makes it so unique.

It’s also probably the best example of their “swiss cheese” level design. There’s so much stuff in the level, but it’s all connected and doesn’t require you to running for 5 minutes from one side of the maps to the other. There’s always some passage that allows you to get to where you want to go.

It’s easier to create a quintessential WoA level in a setting like Sapienza, but to make it work in an active nightclub inside a forest and seeking/identifying armed targets was a helluva job in level design.

I absolutely love playing Berlin, but hands down my favourite map from Hitman 3 has to be Dartmoor.

Just wish there was more than one target to kill during the level.

Altogether it makes for one of the most unique and memorable missions in the entire franchise, hands down.

Absolute truth. Never experienced anything close to it in games/movies/entertaiment. I even had a couple of dreams in which I was at the Hokkaido level, lol

It’s my favorite level from H1 just about tied with Sapienza.
The concept of a relaxing Japanese spa + a high tech hospital facility was such an amazing experience that I’ll never forget.
All the tiny details and many opportunities are masterfully done. 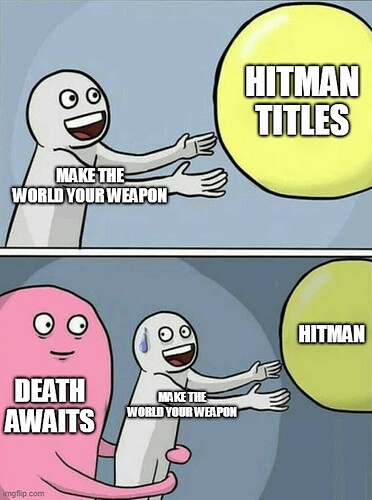