Why are contracts not cross-platform?

I don’t understand the reason behind this. I mean contracts won’t just have overriding IDs considering that the first number tells you what console it’s on. For example,
PC = 1
PS = 2
Xbox = 3
Switch = 4

So why do they not make contracts cross-platform?

It might be some legal reasons or technical issues.
There is no official infromation on this to share. Only guesses and speculations

I would understand seperating PC and all other platforms because of mods / cheats, so you could easily create impossible contracts on PC to troll console players. Other than that, no idea

Because the world isn’t a nice place and we cannot have nice things.

Even if they do cross platform I think Xbox will be left behind. Far as I can tell its also the only platform that no longer works with HCCE.

Well, it’s not really that simple, is it.

For some reason, Epic, Steam, and Stadia all share the same contract ID first number of “1”.

Despite this shared ID, contracts are not shared between these three platforms.

For some reason, Epic, Steam, and Stadia all share the same contract ID first number of “1”

Epic, Steam and Stadia are PC platforms. That’s why they share first ID number.
Nobody said if the contract ID shares any number then it should be crossplatform

I feel like you can’t consider PC and Stadia the same platform, considering that Stadia has always had different gameplay bugs not present on PC. I made a whole thread on it awhile back: HITMAN 2 Stadia Problems to be fixed in HITMAN 3

It would be like saying Xbox and PlayStation are the same as they are both consoles.

Xbox and PlayStation are the same as they are both consoles

Exactly.
Ok. If you want clarification from me, I’ll say that both, PC and consoles has its versions.
Steam is one version; Epic, other version; Stadia is a third vesion of a PC.
Same with consoles. Xbox, Switch, PS - they all are versions of a console 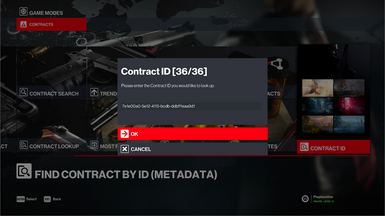 Does that mod essentially make a unique version of the contract (eliminating the need to recreate it from scratch)?

That’s why I asked. What Leaderboard!?

It uses the same leaderboards, but only on the same platform.

Here’s my confusion: Let’s say for example you’re on Steam, and you play a contract on Playstation. The mod says YOU will only see other Steam players listed in “the leaderboard”.

Do Playstation owners see your name listed on THEIR leaderboard!?

If no, then does this mod generate a leaderboard specifically for players on Steam that only they can see!?

Where is that leaderboard stored and how is it updated!?

I’m not a PC player so all this shit is alien to me!