Why did 47 cut his barcode?

I’ve heard that instead of using point shooting on those four guards you were originally supposed to use it on ICA guards coming to Dianas mansion, along with Travis.

If you look up the King of Chinatown E3 playthrough there is also a cut line of dialogue where Birdie mentions shooting Travis hand to 47.

Also, when 47 is in Victorias room and he’s looking out the window, you can see that his mouth is moving but the audio was removed, so he was probably talking about the incoming ICA troops.

As @Heisenberg said, he’s also wearing his new suit from Tommy, and he’s wearing the final version of his bandaid, so it makes sense to assume that this was supposed to be at the end of the game originally.

Note the hankerchief as well, he didn’t have it in the beginning of the game.

That part bother me a lot. I always wonder what developers wanted him to say

I always wondered what he was saying there. It could have been cut a bit better, as it’s so obvious he’s talking. But he’s not.

Does anyone know why the story did get hacked up and reordered like it did? I think it really shows in the final product, unfortunately… the story literally feels cobbled together which apparently is exactly what it is.

I guess I just wasn’t around here when this was first revealed or discovered or whatever. Do we have a sense of what the story was originally?

I know that bits and pieces have been revealed through the Hitman: Full Disclosure app and the concept artwork, such as 47 initially shooting off Travis’ hand (which is why he has a prosthetic in the game) and how the assault team were supposed to be at Diana’s mansion… 47 being a drunken mess (uuggghh) and also how the showdown in Blackwater Park was apparently supposed to be with Travis, not Dexter.

But I have no idea what the original story was supposed to be – it would be interesting to know what they had in mind.

the scandal regarding the cloning experim

like a lot of things in absolution, it’s something that made sense in the original plan but got shifted around so much that it ended up being bizarre. Like reading through a choose-your-own-adventure book in order, without flipping to the pages you’re supposed to. I enjoyed watching the barcode cut scene, it felt dramatic in some way, even though I have no idea what it was supposed to mean.

Where did you find this?

Absolution Full Disclosure FULL DISCLOSURE shows a side of game development that Is rarely seen In such uncompromising and unrestricted detail. The app shines a light on more than 250 images and 25 videos that show the discarded concepts, abandoned ideas, early prototype videos and creative exploration that helped to craft HITMAN: ABSOLUTION. The majority of the content has never been seen outside of IO Interactive and is taken directly from the production folders by the development team NO…

Sorry, after a night of work I can talk even my own language right. Any way, I was trying to say that from what IO wanted to make initially could had been an amazing game. Too bad they rush it

Oh wow. Thank you so much for posting that deleted cut scene. I can’t believe I never saw this before or even heard about it until just now.

An he stills has the car from Diana’s mansion. So I guess you had to kill her at mid game and not at the beginning.

Yes he did. But he took the car right after he killed Diana.

Lasandra Dixon was supposed to have a larger role in this game too.

I thought it was just some inconsequential “Tarantino/Rodriguez thing”. Kind of like how Johnny Depp’s blind character decides to wear sunglasses in “Once Upon A Time in Mexico” after his eyes have been drilled out. 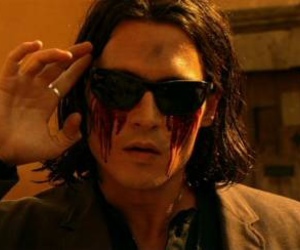 It felt very Tarantino-esque in that it has a hint of irreverence and a kind of thumbing-the-nose at needless character behavior and logic (see also: Infamous Banderas Stair Sliding). Honestly, I felt that shaving the barcode and replacing it with a messy band-aid was the director of ABSOLUTION kicking sand into the tradition of Hitman and blowing smoke into the eyes of its fans.

Same thing with the use of small towns, desert roads, 70’s automobiles… Very Tarantino/Rodriguez. And all of it as sort of anti-sophistication (and in my heart that felt very anti-Hitman).

That said, I always felt a “clean Barcode” and opening with a glitzy Paris fashion show, with 47 in a dinner suit all in the new HITMAN was meant as “a counter-statement” against that flavor in ABSOLUTION.

Same vibe I got as well when I saw the new 47 and realized they had “recast the role” and gotten rid of the owl-browed thug who was 47 in HITMAN: ABSOLUTION.

Oh, I’ve been looking for that movie for so damn long. Thank you so much. Also sorry for necrobumping but I’m just too grateful to you not to do this.