Why Hitman never went to Brazil?

Brazil is a great market for games. We are the 5th in size and population. Then, it would be great if one of the missions happened here in Brazil.

I am sure many Brazilians would like to see Hitman entering the National Congress or the Supreme Court in missions involving corrupt politicians and judges. Besides, Brazil was already mentioned in Hitman 2 and it is expected that some mission happens here.

If Brasilia is off the IOI policy, I would suggest: Rio de Janeiro in the carnival (some drug dealer or the leaders of the Red Command); any Brazilian prison in São Paulo (the leaders of the First Command of the Capital); Santos’ docks, the largest of Latin America (anyone involved with human traffic), or; Gramados in Rio Grande do Sul, during the Cine Festival.

It would be great since there are a lot of players here in Brazil (my dad is one of the 25 best scores in Hantu Port) and the only other visit Hitman made here was in a fictitious village in Colombia.

I have to agree with you. Ever since playing Max Payne 3 I have been intrigued by Brazil and its beautiful depth.

Huh, I thought he already went there… 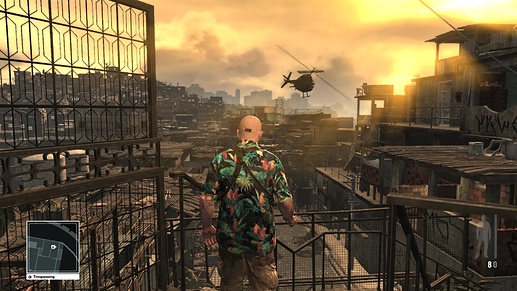 Holy crap awesome edit. That fits so well. If 47 goes to Brazil he NEEDS that Parrot/Toucan shirt

Niiiice! Reminds me of Absolution, when 47 is looking out across the factory and that helicopter swoops by. Come to mention it, I think that was Dexter on-board

As I brazilian myself I agree, but it’s better to ask why is IOI so obsessed with the US after blood money? There’s so many places out there but most maps are always in the US.

I’d love a Rio level with Madri Gras and a jungle. Not exactly realistic but I’d like them to do a Colombia that’s two segments rather than three, I liked that locations but I felt that stuff like the jungle was gimped by the mansion and village being there