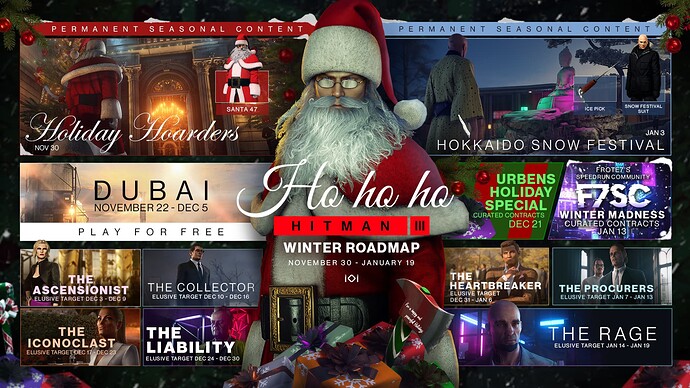 As you can see, all Elusive Targets (ETs) on HITMAN 3 locations returned at the end of the year. I personally like to call this the ET Advent Calendar! ^-^

Perhaps could we get the same this year? Of course, that would be with Year 2 ETs. It would be a great way to have us wait for Freelancer to arrive! I think that just like this made it nicer for first-year players, it would only be fair to have a similarly-fashioned Year 2 ET Advent Calendar for 2022!

Besides, some players (typically on Steam) may not have had the chance to play the game early, because they couldn’t afford it at launch. That means there are some players who might have missed a few Year 2 ETs.

So that was it! I was thinking a full HITMAN 3 Year 2 ET rerun might be in order to finish off the year with some great time playing Hitman! Let me know what you guys think

I imagine there will be a rerun of the Yr2 ETs. Though I think it will be in 2023, not next month as that was probably in preparation of the Steam release.

Like @Canucklehead, I think reactivations will be kept to next year. With no proper year three ETs new acivation. This would also allow new players that will arrive for Freelancer to unlock the suits.

As for December / January. All of the seven Hitman 3 ETs, and all of the six Hitman 2 ETs (sans the Undying) have already been used this year.
There are a bunch of Hitman 2016 that have not appeared in either the ETA, or as proper ETs. I would bank more on them.
As a reminder Travis did a poll of favourite ETs in march, and some have yet to be activated : the warlord, the pharmacist, the badboy, the sensation, … All were at the top of the poll.

I am personally convinced that the last ET of Year Two (and potentially of the game first activation) will be The Forger. He was the first in 2016, and I think it would be poetic to see him being the last.

Honestly, with all of the current unlocks and content, it feels like we are at the end of the base game life cycle. (emphasis on base game)

Hey everyone! We’re picking the Elusive Targets that will be playable throughout all of Year 2 - and I want your input to help guide the decision-making. I’ve already made a list, but want to see how close it matches with the general consensus here. Some useful info: Most ET’s from H2 and H3 will be released with a ‘#2’ version in Y2 (so they are not included) Due to poll limitations (max 20 choices), the ETs are split into two polls & listed by release order. Pick your favourite 3 ETs from …

Well, I’m not exactly convinced by the argument of all H3 ETs having been used up, since that was the entire point of reactivating them all last December. Steam players really would appreciate it, but probably others too.

It just feels weird to me to have Year 2 ETs rerun during the third year… but I mean, if that happens, it’s still happening eventually so it would be great!

But I do believe that having them all rerun indefinitely when the game’s life cycle comes to an end would really be the right thing to do. There is no time left for exclusivity—bragging rights have been had for years, but I think that now, posterity should be valued (ET challenges, rewards, and the contracts themselves—a bulk mode when the life cycle really does end could be nice, considering Arcade is so limited and annoying). I believe some targets like The Wildcard can’t come back though—but if, at least, the ones present in the H3 menu could come back, alongside any other ones they’re allowed to bring back, it would be awesome! (doesn’t sound very IOI but it would certainly be the right thing here)

Rewards and challenges would be great for completionists to unlock. I’m already quite happy that they went ahead and made the Florida Fit With Gloves available to everyone, though it just feels as sad as Mumbai’s ET-less gloved suit—I understand the whole licensing issue with The Undying… but I guess developing a brand-new ET for Miami wouldn’t have been impossible? They did develop The Deceivers for H2; it sure was just merging 2 existing ETs, and it sure is extra work, but I honestly would rather spend my time doing this than developing a rather pointless architecture with separate ET duplicates~

Well, that’s an interesting thought. Although, like I said in my last reply, I would find it weird to see second-year ETs come back for the third… but it’s not impossible. Would je awesome to see it happen regardless! I’m just doubtful considering people might be busy playing Freelancer in February onward, then forgetting the game shortly thereafter.

I also did not understand what you meant by next month being a “preparation of the Steam release”—could you explain? The way I understand is you’re saying it only happened last year because the game was coming on Steam. Though that’s most likely one of the reasons, it was still cool to see a little Advent Calendar, as well as keep ETs (mostly) confined within their associated year—the first. Similarly… I guess now we’re preparing for Freelancer’s release! Separate ETs was not exactly called for and all… but now we might as well embrace that system and have Year 2 H3 ETs rerun soon enough!

But these are not H3 ETs!

Oh I see! Well no, I just wanted it to be like last year with H3 ETs only.

Besides, no one forces you to play them—it’s for players who missed the original window for various (sometimes much understandable/economic) reasons. Furthermore, you sound so annoyed with these two… it seems to me you’ve already played them; that’s great, so in the event of a traditional reactivation, you won’t even be allowed to play them anyway!

As for preserving the contracts themselves, well, Arcade already does it (sort of, it’s not ideal but it’s something), as well as the modding community.

I would say mass reactivations aren’t likely - at the start of Year 2 Travis said that all ETs would be “Year 2” editions and there would be no reactivations (though that changed when the planned April patch was pushed to May and they had to reactivate The Bookkeeper and The Fugitive to be able to fill a roadmap since they had already used all the Y2 ETs that were in the game at that point). This was around the time he was mapping out the ET plans for the entirety of Year 2.

Could plans have changed since then? Possibly. But I personally still expect to see new Y2 ETs in December.

Either way, I’m still going to be supportive of some sort of permanent ET cycling for posterity. It would also keep the game alive without requiring active support, with automated events!

Besides, no one forces you to play them

I force myself to play them in elaborate ways as I’ve played them so often also my metal issues will go off the rails if i miss one!

Great then! Reactivations won’t let you!

I understand the feeling—I myself missed one from Year 2 (literally didn’t spot it on the roadmap). And although I did beat it during the first year… my brain felt horrible for a solid week after I found out I missed it by a few days! I was actually that close to opening the game while it was still running

I don’t think they’ll be doing reactivations this year yet. If they do, I’d hope they prioritize reactivating the Hitman 2016 and 2 ETs which have the more specific suit unlocks that will become permanently unobtainable when they drop support for Hitman 3 so more people will have had a chance to unlock those.

As for next year, I hope they don’t do Year 3 ETs separate from the Year 1 and 2 ones unless they only do them for 2016’s ETs that haven’t been ran in 3 yet as normal ETs (maybe do Year 3 versions of The Serial Killer and The Revolutionary too so every level suit will have had at least 2 chances to be unlocked by players). Otherwise I’d hope they just reactivate all the Year 1 and 2 ETs again, especially Steam players who have all of the Year 1 ETs listed as missed (there’s enough for them to reactivate 1 a week for over 2/3 of the year). Regardless of what they do in Year 3, I don’t plan on making yet another alt account for the ETs cause playing each ET when it comes out four times is plenty for me.

Sorry for the late reply; I’ve been procrastinating.

When they drop support for H3… well that’s an interesting topic in itself, which I might post some more deeply about in a few months’ time.

But for now, all I would say is, when it happens (cuz it’s bound to happen at some point), something smart better be set up.

But the real question is: exactly what did you mean by “when they drop support”? Is it simply when support with frequent updates ends, so probably next year, or is it when the actual servers stop being maintained and shut down?

→ If we’re talking about frequent updates’ support, then I think an easy fix would simply be ET cycling. Just make ETs replayable in any case, and simply make weekly (or even more frequent) mini-events automatically, by letting all ETs in the game’s code just rotate and/or be chosen randomly until the end of time, so everyone can get to play/replay them with all the rewards. That’s just called posterity—and I reckon it should be prioritized over exclusivity and bragging rights, which have had their time. But “until the end of time”, you heard me say? Yeah… no; that’s what the second option is about.

→ If you meant it like, when the servers shut down… then yes, we are going to run into issues. That, too, is bound to happen. The best and easiest fix would be to simply patch the game, replacing the servers with something that would run locally, with a final download letting everyone get their progress data. Then everyone is happy and the game remains playable even without servers. Frustrated PC players who wanted exclusive stuff can now locally hack their progress and newcomers can still get a full HITMAN experience. It’s either this, or players will need to resort to third-party/community ports such as Peacock. Those solutions are unofficial and less preferable as they don’t really come with progression systems (Peacock, for instance, unlocks everything for you straight away) and generally just don’t feel like “the real thing”.