Your Road and My Road to Hitman 3

With Hitman 3 out in four and a half months, and my hype for the game slowly building as IOI teases Hitman 3, I wanted to talk about what I will be doing in preparation for the game’s release, and also if anyone here will be doing their own things on the road to Hitman 3.

For me, with Hitman 3 being the conclusion of the World of Assassination, I want to go back into Hitman 2 and replay the current 16 maps we have. The most obvious reason being to get all the items I have not unlocked, especially quite a few from the Hitman 1 maps that I just couldn’t be bothered to grind again. Another is that I do want to get Silent Assassin rating on all maps on the hard difficulty, something that I have done on maps like Sapienza, Hokkaido, Mumbai, and Whittleton Creek, but not on half the others.

But I think my biggest reason is that I want to go back and try to appreciate each level. To me, half of Hitman 1’s maps havn’t aged very well. The Yacht, Marrakesh, Bangkok, and Colorado are all very flawed, and once we got H2’s selection, I havn’t felt much need to ever return to them. I want to return to each map, do a run from the default start location, and try to see the good of each map.

That and while overall I did prefer Hitman 2 abandoning the episodic structure, it did mean I found it a bit harder to get to grips with each H2 map. Miami and Santa Fortuna I don’t know half as well as any H1 map, and Isle of Sgail and especially Haven are levels that still feel very alien to me. Whittleton Creek and the Bank were levels I got into far more in-depth because they were far less intimidating in size. (I have the feeling when H3 comes out, Dartmoor is going to my first true map, due it not being too huge and probably having limited NPC numbers.)

So yeah, while I don’t intend to do this all of this immedietly, but rather in a leisurely way as Hitman 3 approachs, my goals are:

This is the following.

I’m going to find that fucking guard on Sgail. He’s my white whale.

Im going to do what i always do before a new game comes out: i replay all other Games in the series.

My current plan is to play trough Codename 47-Absolution and then play trough HITMAN 1-3 in one go on the PS5. I’m thinking of not transferring my Progress over btw.

Oh and i deleted HITMAN 1 and 2 like 4 weeks ago because I felt burned out on those games and i wont play them until 3 is released.

Probably not much tbh. Now that Ghost Mode is gone I can branch out to new things that interests me. I’m not sure what to do yet but it’s something that’s opened up to new beginnings.

One other thing, and I’m gonna keep this part low under the radar as it’s not interesting besides me - I want to settle internet drama so they’re not so hostile anymore - the Hitman community as my focus point. The Hitman community has interested me as the most compelled groups imaginable. I’d like to bridge the gap between people who are set in their ways on what they think on the scale. I feel most people who share grievances against someone who do the most hateable thing possible are those who are mistaken by it - usually because it’s skewed enough as it is. In reality, I know people can be nicer about it, but the process of that happening are next to slim/already dealt with before.

Tbh now that I think about it, it’ll be a big waste of time to attempt this as the intentions of that wouldn’t be feasible to deal with that now, overall making it pointless.

Mine is simple. I’ll try to beat all missions in chronological order, Master Mode (When possible, so that excludes Season 1 bonus missions, Patient Zero, Holiday Content and Training), Silent Assassin, default loadout (No loadout on Hokkaido. I can use fiber wire, ICA19 and coin reskins.
And of course, different suits with the exception of the buccaneer because of its bugs, looks ugly anyway.) and default starting location.

With chronological order I mean this:

The timeline is a mess, especially on the holiday missions.

I’m doing this because I’m a bit rusty, I haven’t played the game in quite a while but professional mode seems a bit too easy,

I think that’s about it for me. I’ve got 1000 hours across the two games already, I can only go back and play so much in the leadup to HIII

using MusicalMushroom’s Difficulty mod to give the bonus missions (and Training) Master Difficulty.

The one my friend tipped me off about, the ex-CICADA guy who tells Grey about the chip in exchange for a favour he owed him from back in the day. He’s a support for the argument that Grey and Edwards aren’t working together (at least at that point)

Oh that’s easy. He’s in somewhere you always go before you end the mission

1 or 2 days prior to Hitman 3, I will run through the game just to remember the story and familiarize myself with the targets and characters again.

Well I haven’t found him yet. All part of my larger goal to get all the lore out of NPC dialogue that I can before January

Right now I’m doing 100% challenges on each map and it feels like I am re discovering this series.
I really like it now. Some achievements are a pain in the ass but most are very interesting because they bring you deeper in the story.

I think I will do the same as @MrOchoa start from C47 till the last game. Reading all the briefings, watching all the cutscenes like it’s the first time. I will do so with the help of whiskey and red bull because it really help my immersion. 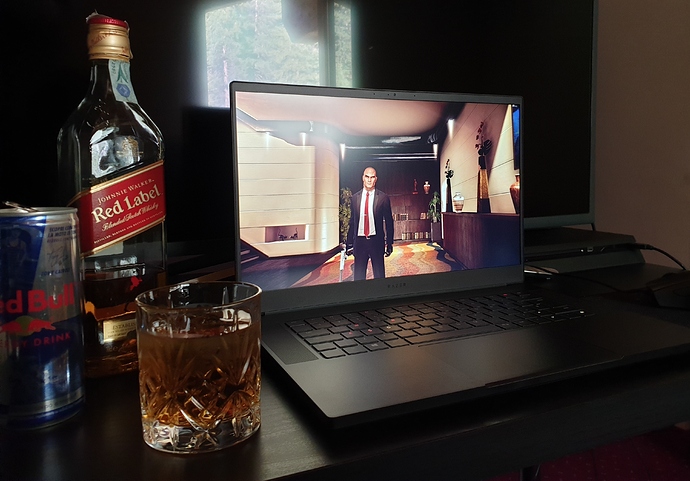 Nothing much. Just play all levels at the pace i find enjoyable, as i have all the unlocks already.

I think that for this game I am going to try a new style of play in changing my Gameplay Options to remove all HUD elements except for:

I played a couple of missions in H2 last night (Professional difficulty) using these settings, and it was quite eye-opening how much I had always previously relied on the mini-map to navigate my way around levels and keep an eye out for enforcers. But the game felt much more organic when I stripped out all of the UI, and forced me to engage with my environment as much as my map.

I think I am going to play HITMAN 3 this way, which will be even more challenging on new maps that you don’t know your way around on, but it should be more rewarding to fully drink in the awesome visuals and atmosphere in the new levels.

I am going to take a day off work, and I hope that IO somehow unlocks the game earlier so you can already play HITMAN and HITMAN 2 inside of HITMAN III.

Because I want to make a complete playthrough of all the missions – maybe excluding bonus missions.
I am down for that.

People are always complaining “It hand holds you everything to do!” in their negative reviews, and someone always has to point out “You can turn that off…”

I like the idea of this discussion! I’ve unlocked everything but there’s a few additional things I would like to complete before the release of Hitman 3. I plan on having a relatively quiet winter so looking forward to some gaming!

That would be a great idea. I reckon the biggest issue is Mission Stories; I definitely think the game’s UI should make it much clearer that the Guidance can be turned to Minimal or Off. Whenever I’ve tried to persuade gamers I know to give the recent HITMAN games a try, I’ve always told them to play one Mission Story from one level with the Guidance on Full (so that they can learn the feel of how they work), and then switch the Guidance Off so that they can enjoy solving the puzzles for themselves.

But yeah, it would be great if the game pushed the message that all the gameplay settings can be customised as the player chooses so that more people consider what options are right for the level of challenge they’d like to set for themselves.

In fact, ideally you could save different Settings Profiles (e.g. a completely no HUD profile for immersion/challenge runs, vs a more HUD-heavy profile for times where you just want to knock out some Challenges or do some testing of in-game strats etc). Would absolutely love to have that as a feature.