Anyone else getting stuttering on PC since the update?

The game has always ran flawlessly for me but since today I am experiencing serious stuttering on PC every few seconds.

I’ve tried turning off VSync and forcing VSync and triple buffering on in the Nvidia Control Panel too which doesn’t seem to fix it for me as well as updating to the latest Nividia drivers and tweaking different graphics settings but it stays the same.

I have a 2080 ti and play with everything on max settings and have always got about 120fps at all times but now every few seconds it dips by like 30fps.

I’m going to put this in the bug report thread too but I’m just wondering if anyone else has had this since the update and knows a solution?

I’m playing the starter pack using Geforce Now and I’m noticing alot of stuttering too. Sometimes it’s the stream, but a lot of the time it’s not. It’s very annoying.

Geforce Now’s issue probably isn’t connected to the update. Yesterday, GFN was experiencing a global server issue that was eventually fixed, and I experienced some stuttering as well after the fix. (attached a screenshot i took yesterday of its status.) Hopefully this helped! It should be running smoothly now.

I am not sure about Hitman 3 itself, though. 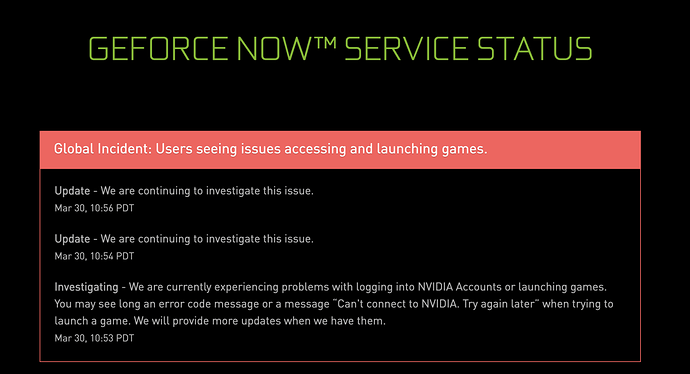 Same for me, but I wasn’t sure if it was Hitman related, Geforce related or Windows related as I had just had a Windows Update which seemed to make my entire desktop a tad slower.

I downloaded the latest Geforce update and it seemed to improve somewhat, but I haven’t tried many locations to be sure.

Game was running flawlessly before this last update.

I suppose the problem with this is that IOI might not fix this until the end of next month i.e. the next patch.

I can’t remember off the top of my head - are they a company that releases hotfixes if there are any problems with their patches?..unlike Rockstar ha.