I know this was mentioned in the joke April Roadmap, but a new Featured Contract was released on April 1st from the Chef from Haven (aka @Urben). Here’s a thread for people to discuss. 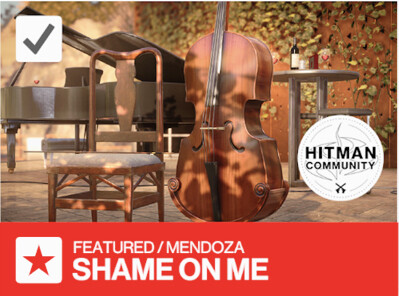 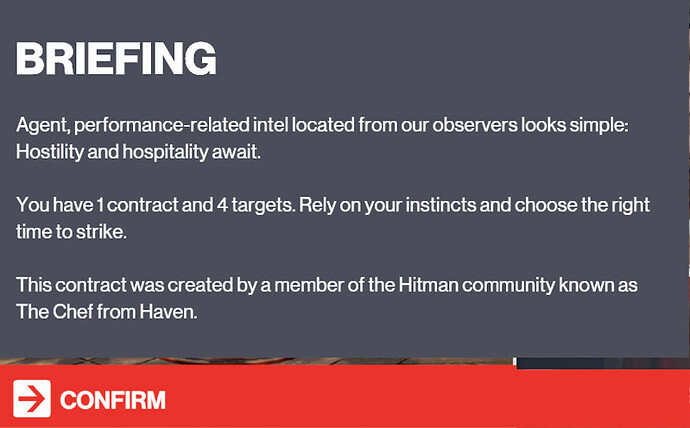 I liked this contract. It took me a few tries to determine nature of the contract, I guess fool me several times, shame on you. Hopefully this will start the return of contracts from the community.

I got asked if I had any contract that fits the theme, that suprises/confuses the player. Luckily I had that one ready, some might remember it when I posted it February last year:

I am able to create Mendoza contracts now without disconnects at opening them. So maybe IO fixed it for new contracts? Though it might only be a PC thing, I have no idea. Please give me feedback about this. Anyway, here is my contract with the interesting musician thing @WINNODD found out. Also tagging @Yacob. I tried to make it both tricky with the picked disguises and yet open enough for different solutions. Also I hope this variation has the least reason for players to sit down and wait ins…

IO changed the title and briefing to fit the theme, but I like to point out that you can easily get some extra challenges in here.

I already saw a variety of videos on Youtube with a few unique approaches.

I agree that I hope for community FCs making a return.

I probably missed/forget that post given the age of the post and the fact my platform of choice is Xbox.

I’ll have to go back and try the challenges. I already have an idea for the silver medal, not sure about the gold.

what a coincidence, I actually tried playing your contract yesterday.

interesting restrictions - but is it intentional for one of the targets to disappear off the map after a minute?

or is that a bug? (blurred incase that’s how it’s meant to be and I’m just dumb)

Just so you know:

Only two targets are initially on the map. The final two are clones that spawn (in the bathroom) AFTER you kill the two originals. Is that what you mean by “disappear”?

when i first loaded the contract there appeared to be 4 targets. (you could see them highlighted in instinct) then I spent some time around the dance floor and one of them was gone. if what you say is meant to occur, then it probably still works? it could just start out weird because it’s on Xbox and not on PC like how the contract was originally. thanks for the heads up

Thanks to Urben for helping us out with this. I liked the idea of something playable that would ‘fool’ you. I also had a good time writing the briefing…

I didn’t have any issues on Xbox. I spawned at the Shrine in the Requiem suit and all targets behaved as they should.

Yeah I’m on Xbox as well, and only two targets are initially on the map. The final two spawn (in the bathroom) after killing the original two. So no clue.

When you look at the “suit” that was used for the suit kills, you can see the Urben chef model from Haven

Not sure if this is a hint on how to approach the contract because I was a bit confused with the difference between black and white tux set and suit as kill complications.

I think you confuse the contract with one from my December batch.

This is a different one that was featured on Friday.

Someone did a No Loadout run on it: Nice, I’m still working on the No Triggers. My initial plan did not work out. Back to the drawing board.

Is there a limit to the number of band members spawning in as they are eliminated?

There is only one clone for each of the initial three band members.

Beautiful. This is the way.

(Without knowing of the self-imposed silver/gold challenges, I completed this contract with no triggers. It’s really not too hard; I used a krug, Sieker, and two propanes. Didn’t even double kill anyone.)

So is this the worst mission for exits or what??

This needs an HCCE contract then.