I spare myself the irritation by simply not playing Berlin

Seriously though, I agree with you. It’d be better if it was a window or just a plain locked door.

The Berlin shortcut is the bane of not just the mission but the whole of Hitman 3 for me. Especially since after patrolling it becomes apparent just how many ways there are to get into the club without walking through the open door.

If it could just be a regular locked door, that’s fine.
Another would be having a guard near or around the door, not constantly staring obviously, but just on a little patrol in or around the area would make it seem like it wasn’t just a hole in the side of a wall.

There’s a shortcut in Chonquing (sp?) that I’d feel was equally egregious. It’s a corridor that leads to the rear entrance of the secret lab. Why isn’t it that bad? There’s a guard you have to navigate past. Can you just knock him out? Yes.
But it doesn’t matter, it adds something.

coming back to this level nearly a year later, I still wonder. this staging was intentional right? the guy’s haircut and suit look like the Constant’s: 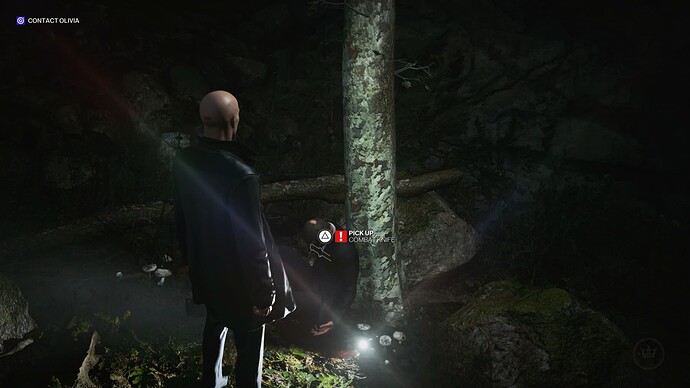 image1920×1080 97.8 KB
his face is even obscured so you can’t make a distinction. I asked other fans about this and they all said they didn’t even notice the stabbed guy so I don’t know.

I’ll admit, it got me the first time and I was about to be annoyed at such a cop out. all this build up just for Olivia to kill him??

That would’ve been awful. And off screen, no less!

But I think they just reused his character model

I think that guy is modelled after the agent from the announcement trailer. You know, the one who dies last in the forest.

I was gonna kinda say the same thing. I feel like it’s a reference – or some lingering cut concept – to the forest chase in the Hitman 3 reveal trailer.

I swear the old guy in the trailer was the Constant himself, but I guess that wouldn’t really make sense? gmtk made a video on berlin today

Always interesting. And this one includes some footage from a prototype or WIP version of the level and insight from the level designers.

And released on my birthday, what a gift!

heres a hypothetical: do you think having a working version of the manhole exit would impact your enjoyment of this map at all? probably not by much. tho i would love to breeze thru nko runs lol

Not really, although it was useful for me as a place to hide a Harvey’s body on my first playthrough. That was all I used it for anyway.

As they pointed out in the patchnotes, there’s two other exits nearby (Bike, and on first run, the forest).

It just seemed a bit…weird having it.

I think during the first month we had the exit I was surprised at the placement. Because I dont really expect a sewer system to be where they put it on that map. It wasn’t a bad idea to have more exits, it was just poorly executed because it should’ve been put in an area that was more useful. Thought exercise for anyone else could be to guess where another place they could’ve put it is, but Berlin is the last place I would request for more exits i just wanted to ask a question

Anyone else having trouble to make the Florida Man follow you when you’re disguised as the drug dealer?
After talking to him he just stays in place. Then he complains and the prompt disappears forever.

I kinda miss when the scrap sword had baseball bat animations. Not gonna lose sleep over it but it made it unique

I didn’t know they changed that, what are the animations now? Like a machete?