I can’t believe this category is still empty.
This is what made Hitman go more mainstream and if by any means probably the best classic title within the entire series.

If my PS2 would have a log of time just as Steam has, it would be probably thousands of hours within this game. 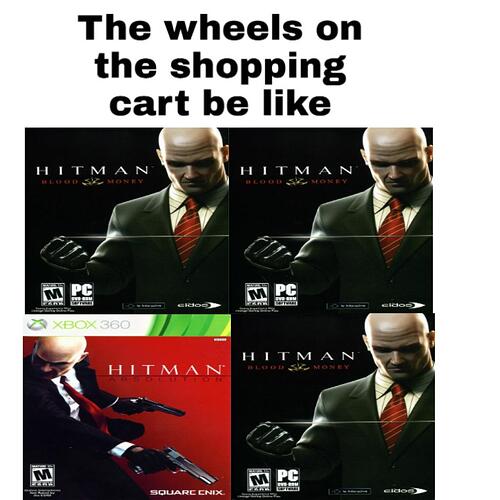 We need to worship this precious gem.

wow there are shopping carts with 4 equal mediocre wheels?

This is what made Hitman go more mainstream

To be honest I find it to be the weakest link in the franchise.

But to be fair the game isn’t without it’s pros. The overall freedom is nice.

probably the best classic title within the entire series.

contracts has the best atmosphere, but i like how weirdly lynchian and overwrought blood money’s colour palette is. adds to the low key satire.

i don’t if i’m too used to play modern games, but i can’t even play 10 minutes of BM without getting angry or bored. Even less with games like H2:SA. I have tried a lot LOT of times because i have like 350 hours on Hitman 2018, but i can’t, i really can’t

Fantastic game, but for newer players and even some returning players it’ll feel too clunky. I’m glad I played the games as they came out.

Putting Absolution and BM as a tie is a sin.

Yes you are right, BM is clearly inferior.

You wot mate?! Those are fighting words there.

Blood money is far from perfect but according to me hols the highest rank in terms of innovation and creative leap in the entire franchise.

Blood Money is strange. Out of the original HITMAN Anthology it’s probably the easiest and more mainstream one. It’s far from a bad HITMAN game and as a plethora of memorable moments, but it has a lot of issues. For every good kill animation we also get the wonky A.I and Rag Doll Physics.

Blood Money I also think is the ugliest game in the series, everything looks very polygonal with one such example being 47’s sharp edges on his bald head. That and every female shares the same physical attribute to some degree same goes for men too.

This is how I view the series in general.

Codename 47: Humble beginnings, but has a rough exterior.

Silent Assassin: Has the best OST in the series, but suffers from its difficulty and occasional inconsistency’s with it’s A.I. Also has one of the best endings in my opinion.

Contracts: Fixed the Rough Exterior of Codename 47, but made it into the edgy moody teenager phase of the series. Definitely a product of its time in terms of style. Gameplay wise it mastered everything that Silent Assassin did.

Blood Money: Looked upon by many as nostalgic due to iconic levels. Might be one of the most sexualized games in the series. Has the worst First Person gameplay in the series.

Absolution: Style over Substance, it’s a good game, but not a good HITMAN Game. It’s the series midlife crisis basically trying to be a moody teenage again.

2016 Post GOTY: they ruined Sapienza and you agree with me. Patient Zero was cool wish they did more of that.

HITMAN 2: I joined the forum with this game. Probably has the best completion high from all the Classic Challenges being done. Really hate the Legacy Grind. It’s unfinished in buggy, but still good.

HITMAN 3: haven’t played it yet, but I can continue where I stopped.

Might be one of the most sexualized games in the series.

Absolution says H̶e̶l̶l̶o̶!̶ Why do I have wood?

As someone that considers BM the best one out of the Original 4, I still think it has it’s issues. The first time I played it, during a time my PC couldn’t handle it and had to play it with the lowest shader model, I though the NPCs look kinda ugly and really hated that when you go by an NPC they would turn (like you let out a fart near them and they wanted to better see the man that ruined their day), the ragdolls felt like a downgrade from Contracts and H2SA and the first person mode felt very stiff not to mention that overbright issue in FPS mode. The Blood Money system was kind of a bummer since unless you went out of your way to gatter notoriety, you wouldn’t notice it.

Still, little Billy loved the more open levels and of course diversity, easier to understand game mechanics, forgiving suspicion meter (I could sprint as my heart contempt), weapon upgrades, decent plot that was pretty easy to follow and amazing soundtrack.

To be honest, I’ve never played Blood Money. But I have respect for it. It, and Absolution, laid the groundwork for the game we have today. It’s also the one Hitman game I remember seeing printed ads for. don’t recall seeing ones for the other games.

Absolution had a pretty aggressive and controversial promotional period. It definitely got a lot of people interested in the game.

Contracts is my first HITMAN, but Absolution was the HITMAN Game that got me into the series since I wasn’t familiar with it.

I say this because Contracts was bundled with the family computer when we got it and I was just a little kid at the time.

All and all though. HITMAN as a series works really well when the players get others into the series. That is my opinion though.

best in the series from a technical standpoint,
every feature it introduced is a welcome improvement (e.g. accidents, poison food, mines, custom guns, I can go on forever)
plus it carried forward most of the best features of the others (e.g. the map, weapon collection, rating)

I see it as the most sandboxy.
the reboot series is great too but just doesn’t feel quite the same.

That’s one of the things I extremely missed in Hitman 2016 and Hitman 2018:
That the game doesn’t pause while using the map, that you have effectively to put more planning into it as time doesn’t stop running.

It’s in ghost mode (cause it’s multiplayer).
But yeah I know what you mean.