Can someone explain this aspect of the guard AI to me?

I’m not sure if this was mentioned anywhere else and I’m also a relatively new Hitman player so I don’t know if this is already known or if it’s a new bug but something has been bothering me about the guard AI in Hitman 3. So here’s the scenario:

Map: Mendoza
Me: I’m in the attic where the non-silenced sniper rifle is and I use it to headshot Tamara Videl while on the rooftop. Everyone hears it and the game says ‘Searching’, Nobody knows who shot it, and there are not that many more people with enforcer dots, most are regular guards. I decide to jump down to ground level and head for my exit and there are no guards with enforcer dots in front of me but they’re all scrambled out cause of the noise.

I run out from the foliage and these dot-less guards all see and know that it was me! My disguise was not compromised neither and I was wearing the same outfit as them. Next thing you know, I’m dead.

Does anyone know what causes regular guards/security to know that it was me or am I missing something important? I know guards tend to head toward the area where the bullet/sound came from once they notice it, and they saw me running the opposite direction of them, is that why?

The guard AI with snipers has been changed back and forth a bunch since 2016 so I’m not even sure where it’s specifically at right now. For a while they would pinpoint your exact location no matter what. I think now if they see you anywhere near the vicinity of the shot you’ll be compromised? At least it’s not instant like it was for a while.

typically, if they see a shot land and kill an npc, they go into this hyper aggressive, all-knowing, omnipotent state, where they will sprint towards your location, regardless of if the shot was silenced or not, and even if you’re halfway across the map. Basically, if you see a guard hauling ass, and you’re in their line of sight, prepare to get insta spotted.

After shooting an NPC, or just shooting more than 2 shots in general, guards can pinpoint where the shot came from and run towards it. They get to the location, and start searching. However, like the attic in Mendoza, or even the Water tower in Colorado, there are places where NPCs cannot reach. This makes them go into an infinite searching state. To avoid this, take one or two shots, get out of the area and hide in a place where the guards can reach. I recommend choosing a container nearby. Wait for the guards to calm down, go back up, rinse and repeat.

I don’t understand why they program AI to discourage sniping when you already won’t get SA from it. I get that it can add tension but it’s sloppily programmed. This and bodyguard AI needs a major rework.

So you guys are saying that sniping is still broken as in H2?

This makes them go into an infinite searching state. 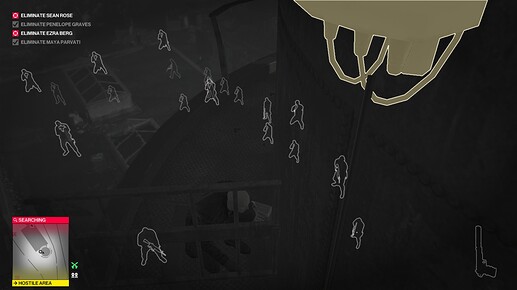 I still don’t know how target AI works and how to consistently distract them.

I’ve done sniping in the Mendoza attic quite a few times. Ofcourse depending on the rifle used, but I used the Hackl Leviathan, and the guards alwats seem to “find” me. However, as the attic is inaccessable to said guards, the search the bedroom for SOME time, before they leave, and search-mode is no more.

The last playthroughs I had at Mendoza I just climbed out on the roof, and made my way down to a foilage. And sneaking my way out - all at the same time the guards are frantically searching the bedroom.

It is way worse to do sniper assassin in Colorado. Mendoza is rather chill for this purpose.

Playing around with sniping the last couple of days-

I did Marrakesh and Colorado.

Marrakesh was fine, I escaped without an issue. Just had a bodies found and ‘searching’ alert. Left the mission as a ‘Clean ICA assassin’.

For Colorado I killed Rose in view of everyone and had everyone storm the water tower and just stand there staring at me. Not in combat, but the state below that.
Loaded it back up and did that thing where you take a shot to distract people before sniping the target.
Twice I didn’t get anyone come to the water tower and twice I had the bodyguards of the specific target come and check the area but they left soon after when they couldn’t find me, returning to their chilled out routines.

So it seems that the AI for sniping is still where it was at the end of Hitman 2 where a distraction is required to not have people immediately fire on your locations.

This is why I rarely use sniper rifles. It’s the one aspect of the game that I wish IOI would improve/fix.

It might sound obvious, but are you still carrying the sniper? Or openly carrying any other weapon? Guards who are investigating gunshots will be more suspicious if they see you with a weapon.

If I remember correctly, then I was ‘probably’ carrying my ICA19 while wearing the guard disguise

Could be it. The game tells you as much but I haven’t tested to see if it matters what you’re carrying.

Largely agree but just wanna note that them firing on the sniper spot isn’t the same as seen. I’m doing all the legacy map challenges again and while they almost always shoot at where I was, I’m still getting sniper assassin every time.

I’m sure you are correct, I’m not an expert when it comes to the finest details of the mechanics.