Can you kill any NPCs with the delivery bike exit?

Just had a wicked idea for a run where you eliminate 5 agents and then run the rest over with your bike to add insult to injury. I don’t have the skills to pull this off of course, but maybe it’s possible. If that doesn’t work, maybe an explosive could be attached to the bike?

Also I’m getting @Trzebiat’s attention for this because I feel like this is the kind of thing he’d be interested in doing. If not, sorry for bothering you.

Not sure about the delivery bike exit, but fairly certain the bicycle nearest to the forest outside the club has interactable properties with NPCs during the exit cutscenes similar to the truck exit on Santa Fortuna.

I don’t think you can “kill” NPCs with exits. They removed it sometime after Sapienza came out long ago, since there’s the one NPC that crosses the street, and you can hit him with the escape car (I think it once counted against you)

They do still collide with NPCs, I think, so you can attempt to “sort of kill” them – in spirit at least – while exiting the level.

I wish. Tried to do that with agent Thames when I thought about that too. 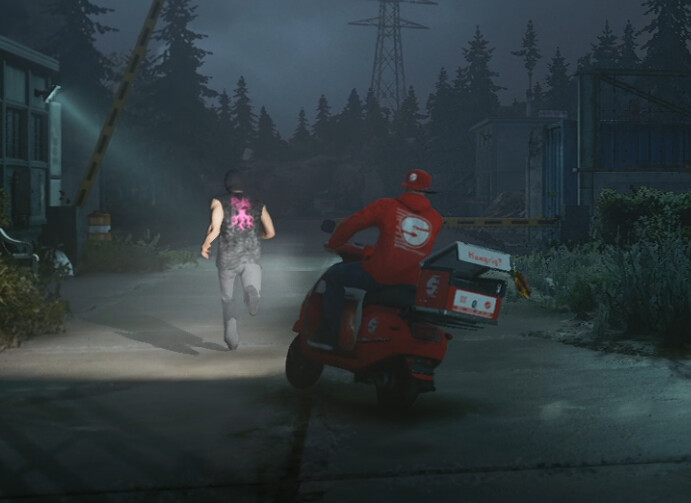 That is a great screenshot.

(I think it once counted against you )

Right, but one exception:
If your contract is with the “No Pacifications or you will fail the mission” complication.
When you hit an npc like GuLe in Bangkok or the yellow guy in sapienza with this complication the mission will fail while you exit

And for the delivery bike exit: No it isn’t possible

I’ve also tried to put a proxy-taser on the scooter and placed leaked propane flasks on the scooter exit route. Had no effect, nothing exploded. The proxy taser was not visuable on the driving scooter. It seems the scooter is not running physically with a collision box like the tuktuk and the car, it’s seems to be a pure cutscene.