I am trying to redeem this for free from the disc but it’s not showing anything in the in game store for hitman 2. How do I get this store to recognize I own this game??
I’m ps4 going to ps5 btw, hitman 1 was digital so it recognized seamlessly

Select any of the H2 mission from your ‘Campaign’ page. They should be greyed out with a line of text ‘GET ACCESS’. Press X, you shall be lead to the store page where you can redeem the pass.

It only shows me the full price when I do it that way. Online it says I need to redeem the content in the hitman 2 in game store before it will show as free in hitman 3 in game store. I’ve been trying everything but there is no hitman 2 Access pass content in it’s store

Alright. How about checking if the code will still work? According to the official guide, you should be able to redeem the code again from your H2 disc:

– Disc: If you bought HITMAN 2 Gold Edition on Disc, it will have included a download code for the HITMAN 2 Expansion Pass; you need to use that to get access to the content from the Gold Edition. See below.

Everything you need to know about HITMAN 3's launch, including how to carryover your progression from HITMAN 2 and when you can start playing!

It’s standard edition so no codes in the box. Those were the instructions for gold edition owners, if you look above that it had the standard edition instructions. I followed it spot on but I see nothing in this hitman 2 store on both ps5 and ps4. I’m missing something, I just don’t know what

How to get it
– Consoles: If you own a physical disc copy of HITMAN 2 Standard Edition, you will be able to download this Access Pass for no additional cost through the HITMAN 2 in-game store. (You will see the full listing price if you look for the Access Pass in the PS/Xbox store as a disc owner.) On Xbox, you also need to own a digital copy of either HITMAN 3 or the HITMAN 2 Free Starter Pack before navigating to the in-game store.

So you need to claim the Access Pass (“H2 towards H3”) in-game within HITMAN 2’s store first (ie: “Your copy of HITMAN 2 is claiming its own HITMAN 2 Access Pass”). And then try to “Get Access” in H3 maybe?

Might be because they consider “HITMAN 2 able to claim the Pass” as proof positive you own HITMAN 2? I also believe HITMAN 2 has the power to redeem H1 Legacy Content on its own for the H1 GOTY Access Pass.

Yep, spot on, I tried that one too, something in hitman 2 is supposed to change that price to free on hitman 3, but it’s not in the store, after looking accounts and everything, even installing all hitman 1 legacy content again, I’m still stuck. I have no idea what I’m missing

I have the same set-up and same issue.

H1 digital, H2 standard ed on disc.
H1 Access Pass is showing fine in H3 PS5, but H2 is not being recognised and there’s no H2 Access Pass to download in H2.

It appears in H3 store but has the basket icon and shows as full price when going to the PS Store.
I tried checking H2 on PS4 & PS5.

An odd thing is that the H2 Expansion Pass (that I don’t own) has a tick next to it in the H2 store as if I own it, and it now appears in my trophy list. Clicking on it shows its price on the store, so that end knows I dont own it.

Finally, the H2 store doesn’t look like it’s been updated because it still shows H3 available to pre-order. Clicking it gives an error to say that item is no longer available.

If I figure this out, I’ll post back here with a fix.
If you could do the same that’d be cool.

Exact same issue here.
I own the standard disc version of Hitman 2 on PS4. All access passes(I even manually searched store) cost money. No free version available for me.
Hitman 1 which I owned digitally worked flawlessly when downloading the access pass.

I guess IO Games should temporarily make all Hitman 2 access passes free on the PSN store until they can find out the issue. This was a major selling point for lots of users(replaying hitman 2 in VR) and I could see the Sony store pulling the game (ala Cyberpunk) if their customer service gets hammered with refund requests.

Hoping for a quick fix!

Same problem for me, I have the standard physical disc for Hitman 2 PS4 and there is no option for the access pass at all on the store.

Guys try going through the Playstation Store on a web browser (not through your playstation).

Caveat: I own H2 Gold Edition on disc. My H2 Gold Edition Pass cleared for free even though H2 was already uninstalled. The H2 Standard Pass was then added to the library automatically.

Did this all before buying H3.

Hi I’m trying to progress-carryover the progress from H2 to H3 but it only got the masters and not the locations. Is this a problem only with me or is this normal.
Thanks in advance

Finally got it working. Managed to get the access pass from the store ingame when loaded into Hitman 2

How did you manage to get it to work ?

Loaded into Hitman 2 and then selected store. There is a download in there called Hitman 3 - Hitman 2 Access Pass which is free. Selected that, downloaded and installed

Same here, sold my physical copy 2 months ago due to Hitman 3 due to having it (so I thought). Keeping an eye on this thread for any solution.

When I load my hitman 2 and go into game-store there is no hitman 2 access pass that I can get
only the expension pass.

I see hitman 3 standard and deluxe edition pre-order but when i choose them they do not work at all. 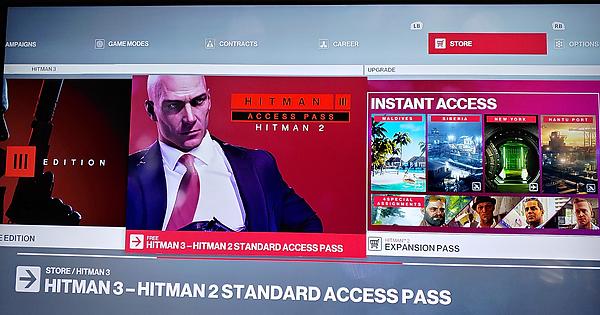 The first picture is what you should see in Hitman 2. The second is after you select it (click upper left corner in the image where it says [Album]. Strange because 30 minutes ago it was not free when I checked that but it is now

Mine is showing $99.99 even though I own it on the Microsoft store. I hope it eventually switches to free because it is quite annoying not being able to play 2 in 3. Hitman 1 worked perfectly though.