Changes you disliked in each Hitman game

In another topic, @wincenworks made a very good point. And it was I’ll quote…

I promise you there has never been a single change to Hitman that has not provoked some sort of player backlash. I have been on this forum for the release of every game since Silent Assassin and there is always someone offended by something.

So I wanted to dig deeper on this. This is sort of a data study on what players dislike the most about what each Hitman game changed. Name the biggest change you disliked for every Hitman game. Only one bad change per game and I’ll start.

Codename 47: because it is the first game nothing “changed” it would be unfair to judge.

Silent Assassin: Super AI makes it very inconsistent to play and disguises borderline useless unless you stay ultra far from guards and walk a snails pace.

Contracts: All levels and those remade are set during a rainy crappy weathered day. Would be nice if they kept that sunny skybox for Rotterdam and China etc.

Blood Money: Too many missions set in United States makes for a very bland experience. No longer is 47 the globe trotting assassin.

Absolution: Every guard is an enforcer… what the heck? So disguises don’t work and we have to splinter cell our way through most of the game.

Blood Money: Too many missions set in United States makes for a very bland experience. No longer is 47 the globe trotting assassin.

Also a sin of Absolution

Hitman WoA by its very nature as an ever changing game has also made so many various tweaks, that at least one person got mad over (as people on the internet are want to do), that it would be a task and a half to list them all

A considerable one I’d say was the change from seperate camera systems on maps to one united system. Personally I’m happy with either but I know some are strong advocates the new system is worse

Silent Assassin: the AI is ridiculous

Contracts: hotel mission closing off chunks of the level like the florist

Blood Money: AI is too generous

Absolution: level design is too Absolutioney

HITMAN WOA: online is the obvious one but I also don’t like being able to start missions already in a disguise

SA: Definitely the AI, can’t think of anything else. Yame!
Contracts: Tried to think very hard but can’t think of anything it would have done worse than SA. Recreated locations from C47 isn’t really a change.
BM: Get shot to pieces for trespassing and maintain SA, epic.
Absolution: The disguise system is horrible.
WoA: The always online requirement is surely the biggest problem.

Silent Assassin: The AI/disguise system really made for frustrating, confusing gameplay back in the day.

Contracts: Since the AI is still kinda inconsistent, maybe I’ll pick the hyper-'00s Slipknot-style, edgy, dark vibe. That’s right, dissing the darkness of Contracts, even if I get why they did it.

Absolution: The abundance of Splinter Cell: Conviction gameplay. Oh, and time to be a dumbass for plot purposes, 47.

SA: AI, without a doubt.
Contracts: Tried to hard to be dark sometimes, but still doesn’t really have any completely negative change.
Blood Money: Far too easy SA conditions, too many missions in the USA, ridiculous stereotypes
Absolution: The greatly downgraded level design, the whole “hiding in plain sight” idea since it’s extremely annoying, losing points for knocking out people, the bad representation of the ICA and a bigger focus on action
2016: Always online, graphical downgrade from Absolution
™2: The sniping changes (which made sniping useless although I think it was temporary), Special Assignments, the lack of new ETs, a weaker prologue/tutorial mission and the story, which I felt removed all the suspense and mystery from 2016’s story rather poorly.
III: Don’t know, since I haven’t played it.

SA: AI is inconsistent throughout the levels and at times borken
Contracts: the gloomy mood, rain / snow and always night time on ALL levels, huge changes to the original C47 levels which I don’t like
BM: blood money system underutilized, you can pretty much kill everyone with accidents and get SA score, all missions (except the Opera House) set in the US
Absolution: Absolution
H16: features from BM / Absolution that didn’t get included, the episodic format, always online
H18: issues I had with H16 + crappy lighting AND stickers galore
H22: Epic exclusivity 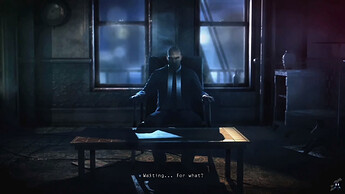 Silent Assassin: The Suspicion Meter. In Codename: 47 blending in may have been a bit too easy but at least It always followed the same rules. In Silent Assassin the Suspicion Meter acts different in every level. And nothing says “fun” more than being forced to slowly walked around because otherwise the guards kill you.

Contracts: Can’t really think of anything I felt was worse than the previous game. Even today it’s my favorite and despite that I’m not being part of the group who thinks HITMAN 2016 was too bright. So Nothing. Contracts was a huge improvement in every possible way.

Blood Money: It’s weird but my hugest issue is the large amount of similar looking disguises. Every bodyguard wore the same black suit, every security guard uniform was the same except for the color and every worker/orderly/carpenter also seemed to have bought his cloths in the same story. They could’ve at least tried to have more variety.

Absolution: I only have to pick one thing?

Okay linear levels with no targets where you only had to reach the exit. The game is called Hitman for a reason!

HITMAN 2016: Compared to Absolution everything was an improvement. I would’ve said Absolutions Contract Mode had more options but they fixed that. Sooo… Nothing again. Even the Always Online doesn’t bother me that much.

HITMAN 2: It’s mostly the same game with some minor improvements. So nothing again.

HITMAN III: It’s mostly the same game with some very minor improvements. So nothing again.

My nags are with the most recent trilogy:

The removal of the second breaching charge, I don’t see a problem with two as I’ve never used the fire extinguisher and bc combo. I understand it was a broken mechanic I just enjoyed two quiet explosives for breaching doors or just toying with things.

My other stand out is the old ability to drag someone and THEN pick things up smoothly on the way to the storage bin mid-drag. Jarring to drag the body, pick up a key only to drop the body, realize “oh shit, the gun!”, grab that too. Now ya have to re-drag the body… aaaaand you’re busted.
Yes, this can be attested to my crap-tier muscle memory but I can recall how cleanly it used to feel and look.

I’ll just post about the new trilogy I guess.

H2016 - no regional voices for maps like Paris, Sapienza, Marrakesh, Bangkok and Hokkaido. Very much affects the immersion imo.

Hitman 2 - cutscenes took a big downgrade (due to the split from Square Enix) and the main story became too “Hollywood” as it went on. 47,Grey,Diana and Olivia all joining forces like a Mission Impossible team. It sort of threw away some of the moral ambiguity and intrigue. I found 47s turn to Lucas too “Hollywood”. This blood pack scar on his hand he’s never noticed before. The plan to “take them all down”. It doesn’t quite land it. Diana joining feels underdeveloped. Lucas becomes a heroic figure without moral ambiguity. Stuff like that. This is mainly just the cutscenes, since the storytelling ingame was good for each map.

Hitman 3 - lack of regional voicing in Dubai and Berlin was a big shame. Also the shortcuts sort of break the vibe of the levels with their bright orange colouring and similar design. I’m not totally sold on the camera and the need to include lots of new camera aspects to justify its inclusion.

Codename 47: because it is the first game nothing “changed” it would be unfair to judge.

Exactly! We’ve got nothing on H:C47! A beautiful game that set the stage perfectly. The big fabulous bang of the Hitman universe.

Contracts: Lee Hong Assassination and Traditions of the Trade-remakes were a pointless exercise in trying to make perfection better

Blood Money: Diana becomes more than a name on a screen or a voice in the ear, the ICA loses its mystique

HITMAN 2: The lack of changes, as in, Mark II

HITMAN III: They should have called it 3.