This just occured to me while looking at the new roadmap for March as we don’t have any escalations in it. I guess the team is too busy with stuff like Bond, new map, preparing PZ for contract mode, …
Why not let some respected members/teams give inputs for escalations. I’d love to see what @Frote7 's speedrun community, @Urben, @Kevin_Rudd, @linux_penguin, @Crewdy or @Quartz_tan would come up with. New complications not present at the moment in contracts, like the one where you aren’t allowed to climb or take a weapon up/down stairs.
I’ve got the feeling I’ve played almost every possible contract, every new somewhat exciting contract uses some gimmick or glitch. This would open up a whole new world for roadmaps and there sure is a lot of creativity in the community!
What are your thoughts? What kind of complications (not present at the moment) would you like to see?

I’d love to see what [people who I don’t want to @ a second time, but also me] would come up with.

What are your thoughts?

Well, that would be one of my wildest dreams coming true there. I’d also love to see some stuff from each of those people! Especially Rudd, having played his modded contracts (I’m thinking about DGS Sniper in particular)
As for complications, that’s an amazing question. It just so happens I don’t have the time to think about this for a long amount of time right now but to name some ideas off the top of my head:

I think there’s probably an audience for it. Devil’s advocate though; you’d have a lot of complaining about it too. One of the most common (misplaced I think) complaints over the last year has been the abundance of escalation-based content.

Practically every bit of content IOI has put out over the last year has been an escalation one way or another.

As for complications, as long as they’re optional, I’m for any complication you can think of.

I like the suggestion of not harming specific NPCs (while others are fair game).

Maybe the idea of a sniper escalation, but with one of the complications being “You cannot drop the sniper rifle under any circumstances.” since it is an illegal item in most (if not all) locations which would force the player to rethink their route.

For anyone on EGS who hasn’t played it 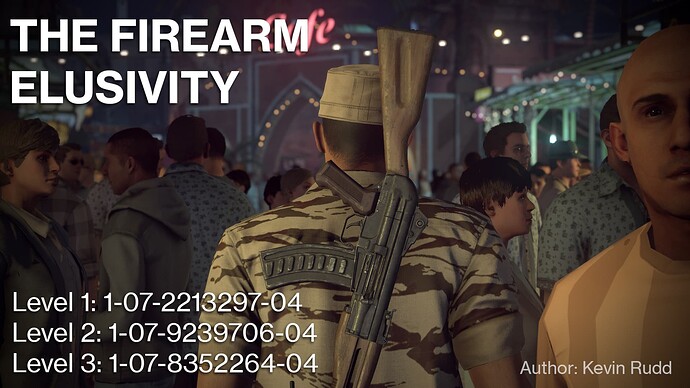 idk if you know, but the peacock emulation server thingamajig by @rdil has a lot of community escalations on it

I’ve seen this, but couldn’t install peacock because I wasn’t patient enough to stick around the discord server for long enough. Might give it another try…