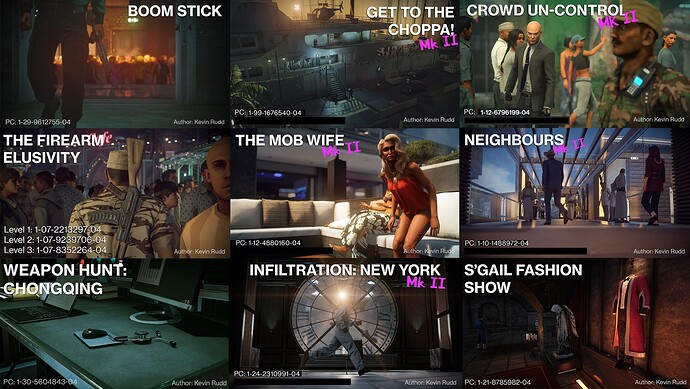 Batch Post1911×1080 258 KB
Those who were around October 2020 in Hitman 2 might’ve remembered a batch of “Modded” contracts I made and released on PC and Playstation servers. Some people had fun with it at a time where IO hadn’t made any new content in about 10 months. Well, I have done a not-as-cool version of that for H3’s server (PC Only).

What are these? Can’t these just be made with Urben’s tool?

No, HCCE only works on regular contracts mode maps, these are contracts that take place on non-contracts mode version of maps. So Escalations, and Freeform Training.

But I’m on console…

You should complain to IO for blocking the ability before we figured out how to get it to consoles!

And now… the contracts:

Hope you get some enjoyment out of it, soz I wasn’t able to discover this stuff in time for getting it to console and coming up with a system for people to make their own Nice run, I like how you moved the Member disguise to a safe public area then used it later

And yeah you figured out my intention with the last target