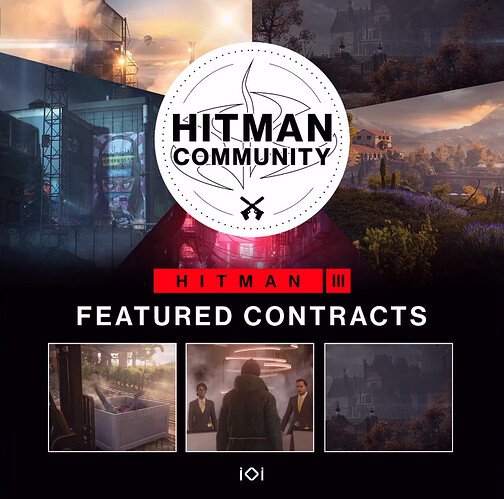 Discuss, compare playthroughs, or rage to your hearts content in this thread x

Tonight? They used to release them in the morning…

Edit: They are out Now!

I will go in to these with an open mind as always. Look forward to playing them when I get Home. Congrats to all 3 of you for getting featured!

What’s in the Box? I guess these were fine. Really not a fan of the suit-only play style so I didn’t bother with that and my game crashed with one guy left to kill in the What’s in the Box contract, but overall, they were Ok. So I’d say that What’s in the Box was my favourite. Through Raven Eyes was a bit too easy for my liking but at least it follows the sloth theme of barely moving to a tee! Still undecided on Snakes & Ladders as I’m still trying out different routes. I don’t like sniper contracts.
But Dartmoor one was even enjoyable. I must admit, Dartmoor probably my favourite map from H3.
However Chongqing wins with devastating score

Really liked the Chongqing one and reminded me that it might be my favourite map. The Mendoza one was also pretty good.

My favourite batch so far. Even tho 2 of them were sniper contracts, I enjoyed Mendoza’s hidden “containers” alot, it genuienly suprised me this was in game. Dartmoor was pretty fun, and Chongqing was a neat puzzle, requiring you to understand streets of China a bit. 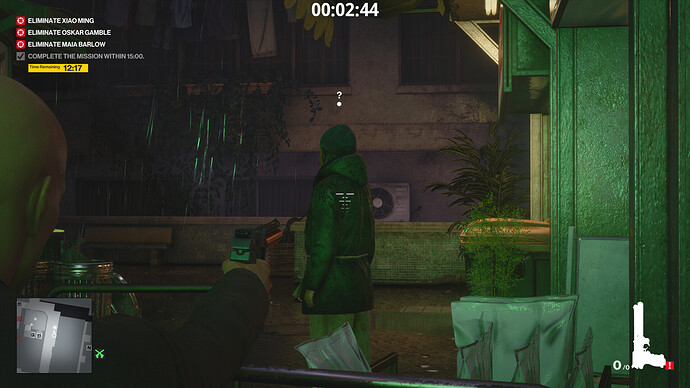 UPDATE: Still did it SA tho; I like how it’s not as hard as it first appears, so long as you have a couple gadgets and know how to use them

@Crewdy yeah STRONGARM has had “odd” times for years now. I think even from H1 days.

What’s In The Box time was 1:34, same as you. Maybe a millisecond faster

I’ll never replay it though. Mendoza…

Glad to see you fellas like my Dartmoor contract. Cheers!

These homeless people are indeed pretty weird.The only way to use Kalmer shots on them is getting headshots.

I’m going to bed. I just fell over trying to get off the couch after a long Hitman session and banged up my aiming arm. Beware the STRONGARM! He will gank U!!!

Yep, I used a sedative syringe. May have cost me 2 seconds but it’s worth it. I think they’re wearing multi-layered coats so the darts don’t penetrate lmao.

Must be the result of Hush’ experiments?

Well, I’ve fully given up on Snakes & Ladders now. I wanted to do it suit start but the times just aren’t viable. 2/3 isn’t bad.

I feel like this is the only thing stopping Mendoza from being a great map, instead of just a good one. In contracts there is only one exit that doesn’t require a key/disguise which means that most contracts end up with a random target in the Vineyard just because it fits the exit.

I’ll never replay it though. Mendoza…

I think if you spend more time on contracts you’ll begin to like it more (though I admit, I see it as a second-rate Sapienza). I HATED Chongqing in the campaign, but contracts have shown me that the map has a lot more depth than the story does justice.

A SO run could work. It’d be mayhem though.

And I agree IRT Chongqing. I hated the campaign mission. After about 10 contracts I finally saw that it isn’t as bad as I thought.

I’ve played a ton of contracts in Mendoza and I still don’t care for it at all. The exit thing like you said is dumb as shit. Patch it and add a car exit or gate exit IOI.

2nd rate Sapienza? Don’t you dare even use that word comparing it to the beautiful mess that is Mendoza.