Hey all, so has anyone else ever had the problem of finding a random contract, but then realizing you have no idea how to complete it? So you try to search YouTube and Google for a solution or walk-through, but that random contract is so obscure, nobody’s bothered to make one? Featured contracts get all the attention, but what about all the others on IOI’s servers? Well, I’ve encountered that problem. So I thought I’d make a thread where everyone can post random contracts they’ve found where they need help.

Make sure to post:
Platform:
Contract Name:
Contract ID:
Description of Problem: (Don’t solicit help without at least trying the contract. Post what you’ve tried and why it failed to help pinpoint a solution)

I’ll start with the contract that prompted me to make this thread: 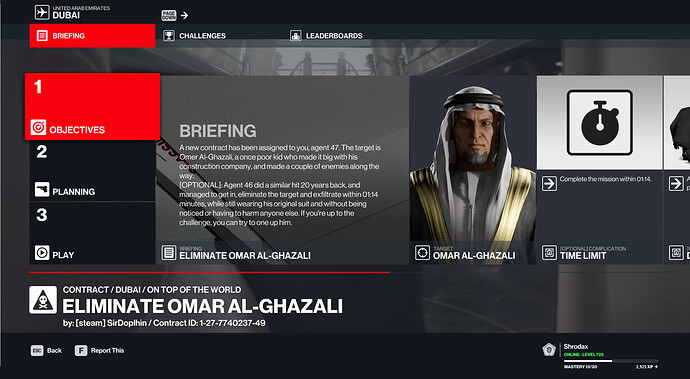 Platform: PC
Contract Name: Eliminate Omar Al-Ghazali
Contract ID: 1-27-7740237-49
Description of Problem: This contract is a speed-run puzzle to kill Omar Al-Ghazali in under 1:14, but I can’t figure out how to do that AND get Silent Assassin at the same time. I can do one or the other. For doing the contract quickly, I start in the atrium lobby, run up the stairs, find a spot to shoot Omar, and run for the exit - but there’s seemingly no way to do that without getting his body found. For doing the contract Silent Assassin, I can run up to the stage, throw the briefcase at him, and use the old “remote emetic gas device in the briefcase” trick to get him to go puke in the nearby bathroom. But he’s too slow at walking to the bathroom for me to complete the contract within the time limit. So now I’m at a loss. This contract is making me miss the Electrocution Phone…

Did you try all the speedrun tactics? Cause panic, divert attention with shots, etc? Might give just enough time to exit that way.

It’s worth bearing in mind that not every contract creator is as careful to make their contracts SA friendly as those here.

Did you try all the speedrun tactics? Cause panic, divert attention with shots, etc? Might give just enough time to exit that way.

Yeah, but there’s just too many people around the stage where Omar is speaking that the AI is fairly unpredictable and his body gets found. I’ve seen the videos of speedrunners doing their thing, but I’ve never been able to make bullet distractions work reliably because instead of causing a distraction, the target just goes into lockdown.

The contract specifies no pacifications, so I can’t use the tranquilizer gun. Even if I could, the game won’t let me use it on Omar while he’s giving his speech.

It’s worth bearing in mind that not every contract creator is as careful to make their contracts SA friendly as those here.

That’s true, I suppose. Although there are plenty of people ranked with SA on this contract, so it must somehow be possible.