I’m not good at explaining theories of mine at all but I’ll try do this as simply as possible.

In Hitman 2: Silent Assassin, we are introduced to an unnamed character assisting Sergei Zavorotko. He appears in a few cutscenes and that is it. You never are allowed the chance to kill him. In Hitman: Blood Money we are introduced to Daniel Morris. Now Vice President, member of the Franchise and Alpha Zerox.

The mystery man is always shown in a dark room, covered by shadow mostly. A lot of people have their own theories as to who he is, most prominently Arthur Edwards and Erich Soders. Though some people believe that he is his own, separate character. We know next to nothing about him. I have a theory that he is actually part of the Franchise and very possibly fictional Vice President Daniel Morris.

The mystery man, who I will be referring to as Mr X, says at the beginning of H2:SA that he never knew Ort-Meyer actually had the resources to pull off his experiments. He seems to know about 47, and likely knows he is a clone, but the nature of the project he wasn’t so sure about, perfectly creating a class one human clone? This is something Arthur Edwards would have very likely known about by now. 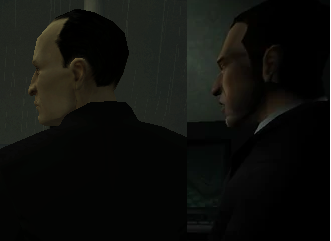 The hair is almost identical, similar nose and chin, the shape of his head is quite different though such is the style for all Blood Money characters. The face is pretty different though it depends on the angle. I could very much see this being his new character design. They both share a blue tie and black suit as well.

In his texture file for Silent Assassin the mystery man is called Mister X. The name of his Sniper Challenge easter egg challenge is Mr X. Daniel Morris is also called MrX in his texture file in Blood Money. Of course he is missing two identifying features, the briefcase (I really just think this was some sort of G-Man influenced thing) and his ring.

He looks quite similar to the mystery man, is a key asset in the Franchise, just as Mr X was, and is literally “codenamed” the exact same thing as Mr X.

I skipped over quite a bit more evidence that he works for the Franchise cause I didn’t want to forget that this theory is to say he is Daniel Morris, not just some guy working for the Franchise (even though there is a lot less evidence to actually say he is Morris tbh). I think I made a few mistakes but feel free to discuss what you think of this theory, or share your own. I might rename this to something like mystery man discussion. I think it’s just really neat how easily you can interweave Mr X with the facts we know of the Franchise. I think it makes a lot of sense.

But how is he in Absolution then? (Unless it is non-canon)

I really would not take the Sniper Challenge easter egg as anything canon personally, just a fun little easter egg

EDIT: Though tbf I think it is entirely possible that Daniel Morris at the time was considered what is basically the mystery man but now the writers could think something different. Honestly though I don’t think the IOI writers have completely figured out the canon timeline themselves just yet.

Firstly, Mystery Man is in his early 40’s, Daniel Morris is 55 at the time of his death.

With that being said Mystery Man/Mr.X appearance in Sniper Challenge isn’t just a simple Easter Egg for completing all Challenges in the demo you also get a achievement as well if you shoot at him. With that being said if you want more concrete evidence that they are two different people. Tore Blystad (Absolution’s Director), stated that the Mystery Man appears in Hitman: Sniper Challenge. I think that’s enough direct confirmation that he is part of those events even if it is minor.

Firstly, Mystery Man is in his early 40’s, Daniel Morris is 55 at the time of his death.

Oh yes I wanted to mention this. It’s a semi-valid point but as a starter his Wiki page says he is in his early 40s, yes, though I don’t think there is a single source for that, afaik it’s just a guess. If it is true, it could also be retconned of course. Or my theory could be wrong.

With that being said Mystery Man/Mr.X appearance in Sniper Challenge isn’t just a simple Easter Egg for completing all Challenges in the demo you also get a achievement as well if you shoot at him. With that being said if you want more concrete evidence that they are two different people. Tore Blystad (Absolution’s Director), stated that the Mystery Man appears in Hitman: Sniper Challenge. I think that’s enough direct confirmation that he is part of those events even if it is minor.

It’s an easter egg/challenge in itself for completing all the challenges yeah, though I don’t really get how it being an achievement changes anything. Tore Blystad did indeed confirm Mystery Man is in Sniper Challenge, but again, how does this change anything? He doesn’t say it’s canon, he’s effectively just confirming that the guy in the window is him. I don’t think he meant that the mystery man was actually canonically there at the event.

A few other easter eggs related to NPCs can be triggered and they all have their own challenges, though I doubt for example the ninja leaping off the building is canon. It seems a little silly if those few seconds of him walking to the window, looking up and walking away are meant to mean anything that serious.

I still think that they are two entirely different people. While they have similar features physically it’s very slight it’s a case of all white men in suits with dark brown hair look the same.

The only thing where they actually correspond with each other is their internal names during development since they both shared MisterX.

It’s possible in the early phases of development for Blood Money Mr.X was suppose to be Morris, but that changed to what we have now.

One thing to note is Morris is apart of Alpha Zerox. The unfortunate part of that face is how we know so little about the organization outside of the fact that all our information comes from Amendment XXV.

It’s possible that Mr X was apart of that organization, but it’s entirely up in the air. Now I’ll just end it by saying this. If Morris was Mr X we would of known back in 2006. I say this in the senses that if IO intended him to be the same character they would of had dialogue suggesting it with him bringing up as followed.

It’s unfortunate how we will never get a true answer from IO, but hey maybe one day when the worlds sane I’ll go take a trip to IO and maybe ask them who is Mr X?

It’s possible that Mr X was apart of that organization, but it’s entirely up in the air. Now I’ll just end it by saying this. If Morris was Mr X we would of known back in 2006.

I have an entire section in my post dedicated to explaining why Mr X was very likely working for the Franchise/Alpha Zerox. I do agree that they probably would have said something, but anything is possible, perhaps they wanted to leave it unclear/ambiguous, or something like that.
It’s also always possible that maybe the developers just implied it without input from the writers. Good enough for me.

It’s possible in the early phases of development for Blood Money Mr.X was suppose to be Morris

I definitely think something like that could have happened, or maybe vice versa. I think if we got Hitman 3 instead of Contracts and Blood Money (which is what IOI originally wanted to do) the mystery man would definitely be extremely important and probably the main antagonist.

I personally still think Morris is the mystery man.

(edited to better match my current opinion and improve phrasing)

Cool theory, not bad at all!
Small question though:

The Franchise needs 47’s DNA sample to unlock the secret to cloning a perfect class one human. When the information about the terrorist Sergei leaks, to which Sergei wonders who could have done it, Mr X implies it is 47, almost as if he was asking for Sergei to kill 47. Why? Why does Mr X want 47 dead? He needs the DNA sample for The Franchise/Alpha Zerox. If Mr X wanted 47’s dead body from Sergei he could get it, easily.

Yeah in the files he is referred to as MrX, which I think is one of the strongest pieces of evidence. Also, no sane person considers absolution cannon.

17 supposedly has no enhanced strength or advantages over an average human.

Guess I and the majority here on the forum are insane including the people behind this little gem of a cutscene. Guess I and the majority here on the forum are insane