DEFINITIVE POLL: Is the Deluxe edition worth it for you?

Is Deluxe Edition worth almost half of the normal game price?

I just hope there’s more to it some time in the future.

Yes and No. Yes due to getting an Artbook and full soundtrack from this trilogy. No due to everything being digital. I don’t really care about pre-order bonuses or the other suits, they are nice to have. But I mainly bought it for the Art book and Soundtrack.

No, I was going to buy it just to support Io, but after the EGS access pass bulls**t, I cancelled my preorder.
Honestly, compared to the 90Euro version of Hitman 2, it is incredibly underwhelming.

I voted no even though I bought the deluxe edition. I mean the fact that there will be no extra maps after the final mission (which is small according to rumors) makes me wonder if it is worth it. I am personally not that interested in the commentary, but the art book & music is cool I guess. The appealing thing for me was the cool suits we get if I am being honest. As for the deluxe escalation, I feel like they will be mediocre at best, though I hope to be wrong.

Would it be right to think that those “bonus missions” they’ve told us they will do in some moment will be included in the deluxe pack or will it be a separate paid DLC for everyone?

did they mention anything about bonus missions other than the deluxe escalations? I thought there will only be 6 missions and that’s it. If there are bonus missions, even if reskin of the same maps (the icon, landslide, house built on sand) then I would say it is worth it.

I think they’ve said there will be bonus missions in the future, tho it’s not known if linked to the deluxe edition or not

If @cake941 can help me getting confirmation about IO saying that about bonus missions would be great, because i’ve already forgotten where i read that.

if there will be extra missions or whatever then I am afraid we’ll have to pay for them just like the Patient Zero Campaign because they haven’t talked about extra missions included in the deluxe pack. I guess we’ll see what they plan, I just hope they keep updating the game for at least 2 years and not forget it to focus on the Bond game.

For the price they are asking for the Deluxe I bought HITMAN 2 Gold at launch, coming with two full fantastic levels delivered at a later date.

The deluxe has suits and couple escalations. It’s ridiculously overpriced.

“Worth it” is very relative.
Relative to entertainment value, I have almost 500h into Hitman 1 & 2 and I’d pay 500$ if I had to. 1 dollar per hour doesn’t sound bad. Movie theaters are more expensive and often way less enjoyable, for instance.

Now, judging it relative to other game bonuses in the industry, relative to previous Hitman deluxe/gold bonuses and relative to Hitman 3 standard version, I gotta say the H3 Deluxe is very underwhelming and not worth it.

Yet, deluxe is the one I acquired because it’s so relative that you can look at it from multiple angles, so it’s hard to reach a decisive definition of worth.
If it wasn’t my favorite series, I’d safely say it’s best to buy standard and only upgrade to deluxe >50% discounted later, if ever. Thus, I voted “no”.

The “50%” more than normal price for Deluxe Edition isn’t something bad if that bring a unique stuff including some phisical gadgets. But in this case “normal” price is very high, and 50% more of this price is a huge amount even for a game. Especial it’s only three skins (very good), 6 escalations and digital stuff. Overall it’s too expansive for something what isn’t interesting. Half of this stuff will be downloadable no matter if you’ll pay for this or not - just other users will upload to web. And only thing which is exclusive is these skins and escalations which is quite poor content for a Deluxe Edition.

Hitman 2 Gold Edition had many new skin packs and two Sniper maps and two huge DLC maps with unique content (for me these DLCs was even better than normal levels) for lowest price!!!. So hell no!. Totaly not worth in this case.

I always blindly bough a “best” edition of Hitman game no matter what. But now I’m like “IOI Seriously?1”. Not this time even for a fanboy. And sice there will be a “upgrade Deluxe DLC” which I can buy anytime, so I’ll just wait for discount and purchase when I think i need it. But now it’s a joke.

Altough I really love the Dance with the devil outfit, and hitman, and this could be the best of this 3 hitmen, its not enough content for the money…

For people into background information, developer insight and who enjoy even tiny bits of content, like I do, this is perfect. For everyone else who is only into gameplay content only, definitely not.

Nowhere near worth it for me. There’s some cool content there that I will definitely want to pick up in a sale, but the current £20 premium is insanely poor value compared to what we got for our money with the extra H1 Patient Zero content or the H2 Gold Edition content, which were both about the same markup. 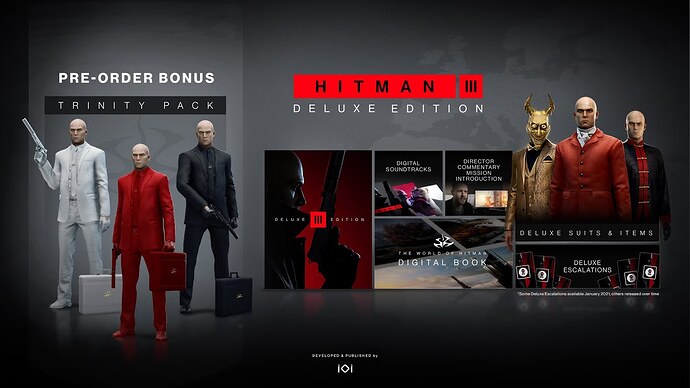 However for that price and edition (which should be the most complete one) we could’ve accepted AT LEAST a Steelbook Physical Edition, and Hitman Legacy ACCESS PASS eventually…

So no, not really worth the price

For me it is. I would pay anything, in my limit, to have back the Blackballer.

You mean the trinity pack was inside the standard per order?

Trinity Pack is just a pre-order bonus for both versions of H3, Standard and Deluxe. Still time to refund the DE and then purchase the SE (before 20th January) if you want to keep the Trinity Pack but prefer to wait for the Deluxe Pack Upgrade to go on a sale…