Did we ever get anywhere with the possible Dartmoor Easter egg involving the unicorn horns?

I know that Jeremy the Wise did extensive research into it, but found no results. And there’s nothing in the code suggesting any unique dialogue is involved or secret exit.

There’s just something so alluring about the idea of there being a secret in Dartmoor we haven’t stumbled across yet.

I was playing through today and was freaked out by 47 randomly saying “a secret door…” whilst in the garden. 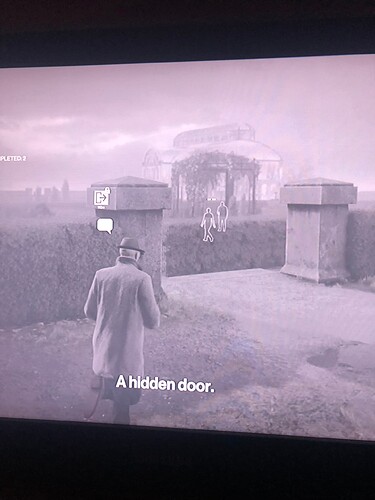 Also, I read somewhere that there is something in the files about a Ghost? What was that all about?

I need more infos. How what when why? Been looking for dartmoor secrets for ages.

Edit: normally you get the hidden door line when investigating Zacherys room.

I’m not sure if the line was said by some glitch - I’d just done a contract and I was running away form gunfire. That’s when he said “a hidden door…” - I had to save the footage and go back to get that screen shot.

Could the line have been said by accident? Or could I have unlocked a hidden door in the garden? (Probably the former)

Dunno. Im thinking glitch at the moment. This area in the garden where you took the screenshot doesnt really has a lot of potential in regards to hidden doors. Theres gras, bushes and a tree behind you.

I’m talking it’s either a Glitch or a Guard was opening the Door, while in searching Mode.

I’ve just tested this - and the guards don’t open the door, they just fade through it and 47 doesn’t say “a hidden door” when they walk through.

I placed an explosive in the room then set it off and they just walked in, without the line being said.

I’m pretty sure it’s been mentioned by this point that there’s literally nothing in the code that points towards a secret Dartmoor exit. Unfortunately.

It’s just a pipe dream a lot of people somehow have.

Yeah if you open Zackary’s room but Diana’s speech gets interrupted by combat it get delayed and she just says it when things calm down.

Never heard anything about a ghost though. I am intrigued.