Do you think HitBoy canonically killed the wife of Vinnie with the grill?

To me it would seem to be true that he did. The reason is this. The game it just insists that you set her aflame. I mean think about this. It’s in the intel. I believe there are 3 different pieces of intel that hint. And they happen to hint toward our man of hit, to be lighting the lady aflame.

I don’t think the original games really cared about collateral damage as much as the new trilogy. Like in Blood Money how you can kill numerous non-targets in accidents and still retain Silent Assassin.

The game evolved over time. BM was an over correction with too many (unlimited) kills allowed so long as they were accidents. I would not read too much into what that means for cannon story line.

Cannon-wise is a silly argument. It’s whatever you want it to be. Maybe he killed her, maybe he seduced her, maybe she never saw him and he came from the shadows. That’s what makes this series fantastic.

Granted, it’s been a long time since I’ve played this one… Giving it some thought - I would think her passing out upstairs on the bed would be the most canonical occurrence (in regards to obtaining the necklace). Wasn’t there also something about some pills in a ground floor bathroom? Or were those for Vinnie?

As for the grill kill? Nah. There’s really no reason to kill her.

I always try knocking her out when she goes to the bathroom by the inside pool. She’s not critical to the mission and I feel bad letting her two kids be orphaned

If she had been more critical, like the mail man then yeah, she would be dead.

Absolutely not. Never mind the new trilogy, this is still the 47 who existed in the first four games, and who is at his, shall we say, grumpiest, after having just survived a gunshot wound to his chest from Contracts only weeks to a month or two before, and so was saltier than we see him at any other time. He’s being utterly professional, and to the letter with his assignments, not doing anything more or less that might put himself at risk again.

Remember the Meat King’s party? The dialogue between he and Diana strongly suggests that he is not going to go out of his way to kill the real murderer, he’s just going to stick to the targets he’s been paid to take out and nothing more. Even in the new trilogy, that’s still 47’s operating standard.

He would not kill the wife, even in an accident, just to get the microfilm. Not only was she not a listed target, but he could risk destroying the evidence the client wanted in doing so. He would disguise himself as either the clown or pool boy and follow those story paths to getting it from her.

Well in Blood Money accident kills do not count as kills. So if you do the grill thing you still get silent assassin. Same goes for when the guard dies in curtain call from the dropping chandelier.

The only thing I can think of is the ether which can be used to knock out our guard with the panties sniffer. Which in my opinion has to be the canonical collection of the FBI disguise for Hit-Boy, who uses it to activate the grill and then also assassinate Vincent earlier that same day using the poison syringe while he watches TV. I’m also conflicted canonically-speaking, on whether 47 snuck suit-only into the vet and treehouse, or if he knocked out a garbage-male and accidentally crushed him first and prior.

My point was, that changed in the new trilogy. You can’t kill ANY non-target, in any way including by accident and still retain SA.

Canon is 47 killing all the clones, orderlies and SWAT on his stroll out of the Romanian asylum. Canon is also 47 poisoning Tzun and shooting him in the face, for which he needs a waiter disguise, for which he needed to kill a waiter.

You think he cares about Vinnie’s alcoholic wife?

He made that glass rooftop rain down on her because it’s the accident kill he could most easily get away with, without endangering the microfilm.

Canon is 47 killing all the clones, orderlies and SWAT on his stroll out of the Romanian asylum. Canon is also 47 poisoning Tzun and shooting him in the face, for which he needs a waiter disguise, for which he needed to kill a waiter.

No, it’s not. 47 killed all the Mr. 48 clones, yes, but there’s no evidence that he killed the orderlies or SWAT members. The dead orderlies seen in the opening cutscene of H2:SA and in the first level of Contracts we’re killed by the SWAT and other inmates. And there’s no reason to think 47 had to shoot Tzun to get to Lee Hong.

You’re thinking C:47 gameplay. Ignore that, Contracts provided alternatives that are more consistent with the rest of the series and is the one that should be used when determining how those events went down. For Colombia, ignore the gameplay requirements of having to kill Pablo’s soldiers; as far as story goes, only Pablo and anybody still in the drug lab when it blew up were killed. That’s the canon.

That is crazy talk my dear man!

That is correct talk, which is all that is relevant. 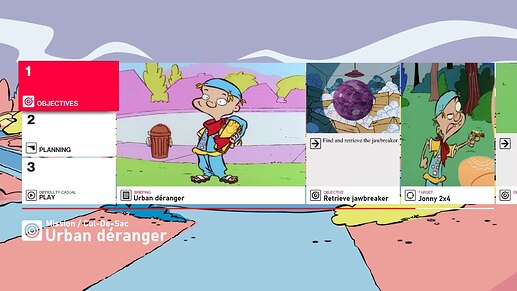 Yeah I know which truly and deeply stinks (in my opinion). That and the fact that all targets are super evil villains, as well as the fact that there is a rating/challenge screen for the final trail level, are the only three things that I hate and then DEEPLY DESPISE about the new-game trilogy of Hitmen.

That H2SA opening cutscene always left me deeply and truly confused. The reason is because we see what seems indeed to be a guard getting fibre-wired, and a shotgun blast takin’ down a team-member of the S.W.A.T. gang. How do you explain the fiber’d wiring? Was that done by 47 himself, or someone else? It seems indeed deeply to be 47 since they are saying “WOW, this guy truly IS a legendary killer after all!” while at the same dang time viewing a movie of a man unseen in the shadows, fiber wiring and shooting. Who could this mean or be like?

Yeah that was the cool thing about BM for me, some of those targets aren’t really bad people. But 47 kills who he’s paid to kill, no judgement. Money talks. They flipped that with Absolution and the new trilogy. Everyone is bad, 47 is good and righteous. And it looks like moving forward that will be the theme. Blah.

Several possibilities, especially since we’re supposed to ignore how C47’s gameplay went down when compared to the overall story. Perhaps 47 killed a few of them actively guarding Ort-Meyer’s lab, since his contract on Kovacs was now complete and he had now wandered into a personal mission. Perhaps some of the Mr. 48s got further out of the lab than we thought before 47 dealt with them, and they killed those people. And then, there’s Mr. 17, whom Sergei and the Mystery Man found still inside the asylum and employed later.