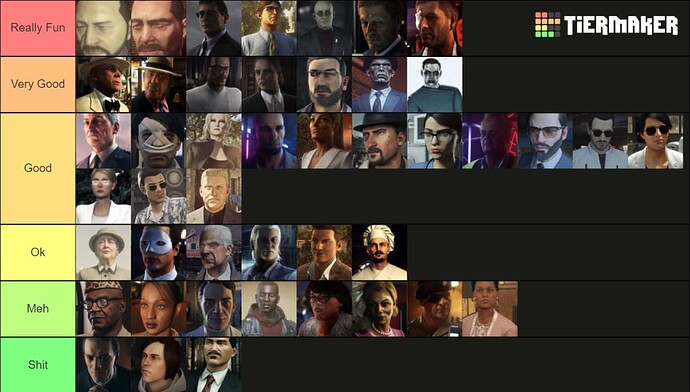 At first I didn’t have anybody on ‘Really Fun’, but I couldn’t help to think about how good The Brothers were (or seemed to be). So I went ahead and put them up there… Then added the others.

The ‘Shit’ list… The Prince is almost always surrounded by bodyguards, he might even glitch(?) and not move from 1 spot. Subduing a mountain of guards is ridiculous. There’s a couple good ways to get him, but not a lot of opportunities where collateral damage might be a factor. Having a night-time mod activated while using a sniper rifle on the chandelier is a fun and good remote way to kill him!

The Sensation: It seems the best way to get him is to rush and poison his drink.

The Food Critic mostly sits in one place. It’s possible to isolate him up to the next floor, but since he doesn’t move… I can only think he could’ve had a route through the kitchen chiding the cooks in there, or passing by where Ken Morgan sneaks a taste (but then falling chandeliers might make him too easy).

The Mehs. They don’t move around a lot, or their kill opportunities are limited, or they have an entourage of guards or roving trespassing areas. Kinda boring but not annoyingly hard to kill.

Okays. Not much to love, but not bad enough to hate.

Goods. Some of these might be ranked better than they deserve. They do take more work, have more kill opportunities… Or getting to them is enough of a challenge. Nothing too bad (if you don’t mind restarting).

And yes. I DID put Haverfoek in the Good section. Maybe because I think he gets too much grief because people failed to be aware of his (contract) complications.

I never got to play ‘The Wildcard’, but I’m sure he was good.

Very Goods. A bit fun and not too hard to kill.

Really Fun. Hard to pick… But I didn’t want to leave it empty. The Forger could’ve been here. He has 1 guard that usually trails him a good ways behind.

Screenshot 2022-10-30 0837361297×608 82.2 KB
The surgeons never get enough love…
Really Fun=Really good targets or well thought out changes to the mission
Very Good=Targets that are good or intriguing changes to the mission
Good=Targets that are interesting and a little fun, or alternatively, better Hawke’s Bay
OK=Targets either aren’t incredibly interesting or are just, well, ok.
Meh=I don’t like these targets but I can find some enjoyement if I’m in the right mindset.
Shit=They don’t move and are surrounded by witnesses or are ruined by too many instafails.
4 Likes
The_Elite_Institute October 30, 2022, 10:57am #23

The Surgeons are great. Part of me wishes they were used more, but I also think not seeing them all the time like some ETs adds to their enjoyment.

The Ascensionist in top tier…

The Ascensionist is alright. Not like fantastic, but as the only Dubai ET she certainly stands out a bit more. Same with the Liability, although he has loads of opportunities. Rage is the worst of the three, mainly because poisoning his cocaine is quick and basically free. 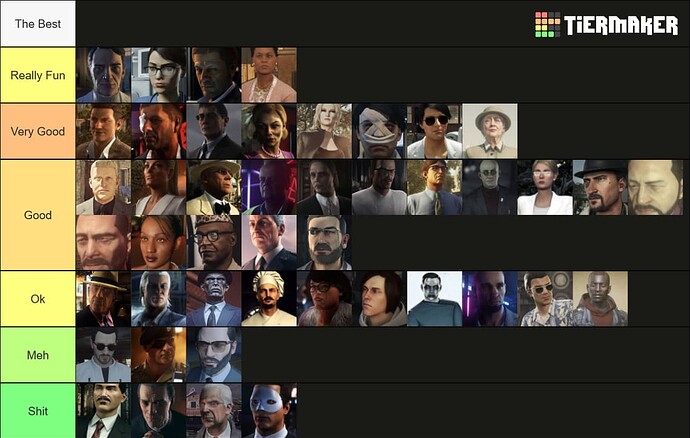 That you’re all insane?

Maybe I’m misunderstanding the criteria (because a lot of these just seem to be the easier the better, contrary to how these sorts of things usually go), or maybe I was just especially jaded by how awful and stationary ETs like The Chameleon and The Food Critic were? I don’t know, but The Ascensionist has a 10 minute route through several floors of the skyscraper from lobby to penthouse with a fun story and plenty of kill opportunities along the way. Route, map changes and opportunities should be an easy A tier at least. All that said, based on similar things, basically all H3 ETs except The Liability and The Rage should be easy top 5 (before anyone asks about The Undying, he’s number 6 for me, brought down by The Undying Returns being exactly the same).

The gunrunner’s overrated, I don’t want to have to panic him to get him to do anything!!

His 11% and 18% completion rates would say otherwise. He’s not easy to do, specifically because he’s very linear and deliberately designed to punish players who attempt to cheese his routine. I appreciate the experiment, but players hating him is very much justified here. 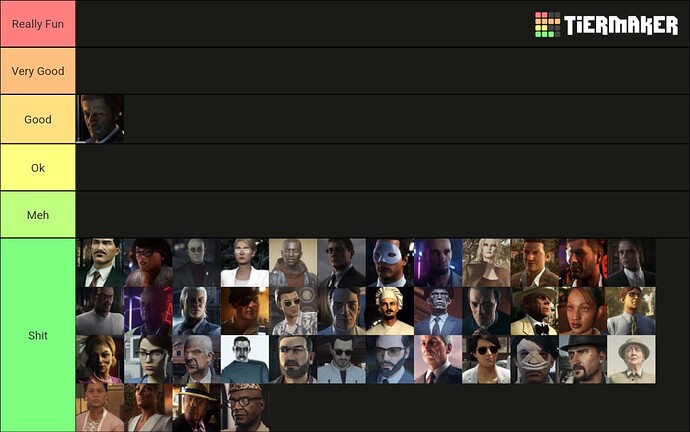 Fuck my last post, this is the best ET 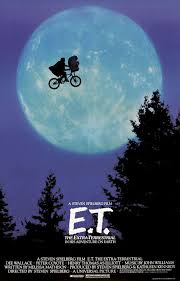 The master of disguise!

I would rate all the Elusive Targets as “Really Fun”, in the sense that all different with some sort of intriguing narrative with many different ways in which it is possible to set up a kill. The Pharmacist in default loadout is pretty limited in how you can kill the target (propane flask, chandelier drop), but that one was still OK.

(JK I actually think it’s a pretty good ET, especially with no loadout)

His 11% and 18% completion rates would say otherwise. He’s not easy to do, specifically because he’s very linear and deliberately designed to punish players who attempt to cheese his routine. I appreciate the experiment, but players hating him is very much justified here.

In H3 he’s not particularly hard with the Sieker, but maybe you’re referring to his H1 apparition? Since I never played ETs in H1 I wouldn’t know but he would probably be pretty hard with the limited equipment. Also where did you get those completion rates?

In H3 he’s not particularly hard with the Sieker, but maybe you’re referring to his H1 apparition? Since I never played ETs in H1 I wouldn’t know but he would probably be pretty hard with the limited equipment. Also where did you get those completion rates?

Not many targets are particularly hard when you have the Sieker, but even then, you still have to wait out the routine. To some extent you are forced into a pattern.

Here is IOI confirming that The Fixer has the lowest success rate, and on his re-activation in 2018, IOI specifically had to spell out the fail conditions. That screams unintuitive and badly designed.

Sadly, I can’t find any specific number sources, other than what i’ve seen and written myself. Blind leading the blind and all that. Any help here @Travis_IOI on these stats would be nice.

The first activation of the The Fixer in H1 had a success rate of only 23%. This article has the infographic that was posted on the blog on hitman.com during the SE H1-era of the site (before it was all removed after the SE split). 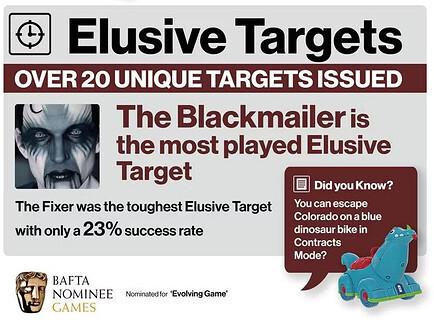 Ah, thank you! I’ll update all the pages I know of with this statistic. Sorry for anyone that i’ve mislead with the old information. 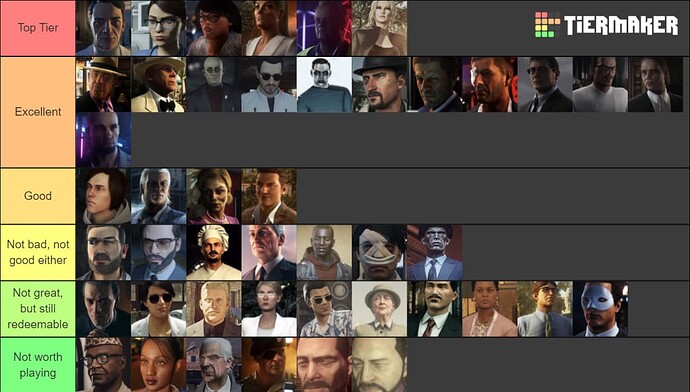 my-image (1)1140×649 78 KB
Right, may as well share the tierlist here as an early preview of the video. Full thoughts will be available soon, with audio!

Note: The placement of each target per tier is meaningless as of right now, and I will likely change this to better fit that style soon.

Here is IOI confirming that The Fixer has the lowest success rate, and on his re-activation in 2018, IOI specifically had to spell out the fail conditions . That screams unintuitive and badly designed.

Ah I thought you were talking about the Gun Runner. I actually never played the Fixer.

That screams unintuitive and badly designed

I dunno. I found it to be really clear. It says the target is meeting a courier. So why did ppl knock out the courier before the meeting? No where in the briefing did it say the target did not know the identity of the target, kind of like Caruso not knowing the identity (look) of the doctor.

So with not stating the identity of the courier being known to the target, ppl should have assumed that the target could have know him. So then why knock out someone the target needs to meet?

I can understand the frustration and anger behind the insta fail, perhaps ioi could have made the target wait at the meet area and when the courier didn’t show up, (in case you decided to KO the courier before the meet), they could have made the target get suspicious and then flee. Kinda like the acentionist if you make her friend disappear. But they didn’t have those ideas yet until then reached Colorado and the bookkeeper.

And if taking the target out in that way, you lose SA by losing an objective but you don’t insta fail…unless he escapes cuz he gets suspicious due to the courier not showing up. That would have been a good alternative to him.