Got bored so made a tierlisting of the Elusive Targets. Didn’t play prior to three, so there are a bunch not included for that reason. May have omitted some that have made an appearance but that just means they’re totally forgettable!

For clarity, double targets are ranked together as I feel that the quality of that ET depends on everything taken together - much how other targets may have another secondary objective.

Here’s the list if you want to do it yourself: https://tiermaker.com/create/woa-trilogy-elusive-targets-903647

Please take this list as seriously as I took it - ie: not much. A lot of these were based on gut reactions as to how I feel when I think about them. 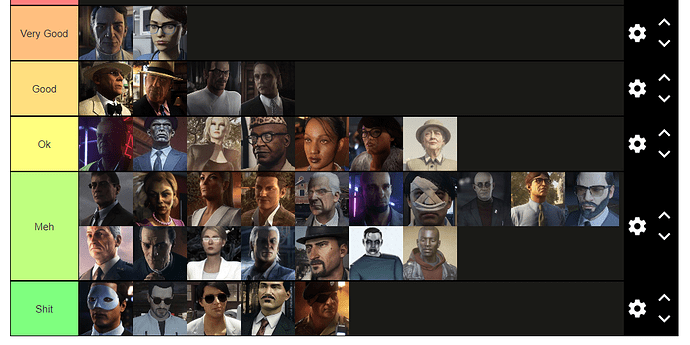 Personally, I think H3 ETs, apart the Berlin one, are really an improvement since the old ETs, but few of H1, those with a good routing like Forger and Identity thief, are still good targets despite they’re not really difficult to take them out.

Edit : I messed up something, and the ok ones are below the mediocre ones. Still…

Edit: as you can see I’m quite picky with my elusive targets. What makes a target good is the combination of backstory, kill opportunities, route and character. Mark Faba is obviously the goat elusive target. The rest speaks for itself. I liked the fugitive bc of the puzzle element (ala Flatline) and the Guru for its originally complicated registrictions. Bottom tier lacks everything that I think is a must have.

I’d like to add that there not in order (in the sections) of what my favorite one was eg i actually prefer The Rage over Sean Bean, but I’m lazy to put them all in my exact favourite order. 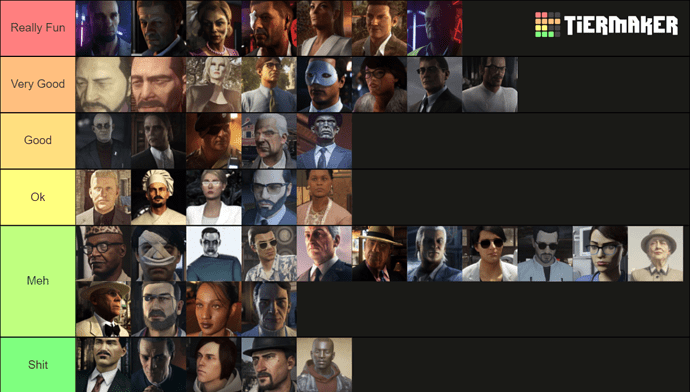 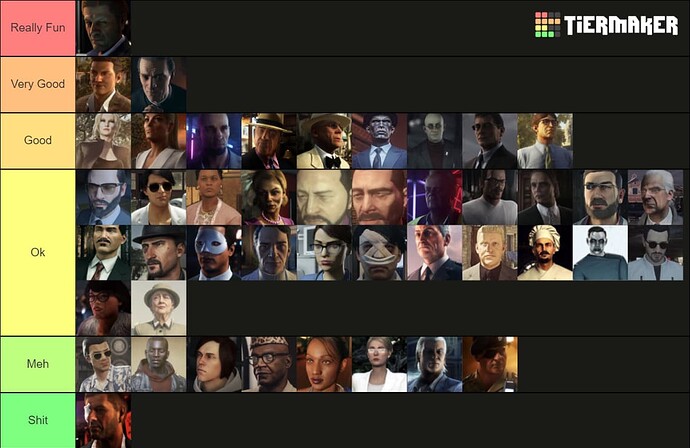 I’ll try to explain why I tiered it this way. I think the more “involved” ETs rank higher and the less involved they are, the further they rank down the list. Mark Faba very clearly has the most involvement of most of the ETs in terms of presentation and direction from Diana. I think the two I listed in “Very Good” use their location well and make parts of the map that aren’t so obviously used in the main mission pretty well that they really help sell the idea of what an Elusive Target should be to an existing map. The “Meh” list often includes targets that do not loop their routes completely, requiring you to gamify the mission by having advanced knowledge of what they’ll do or you’re restarting the mission for that one time only opportunity. Or they’re The Fixer, the ET most players failed in the whole trilogy. And Mark Faba is at the “Shit” end because it’s just a full on reuse of an existing mission; I’d rather have seen an all new one instead. 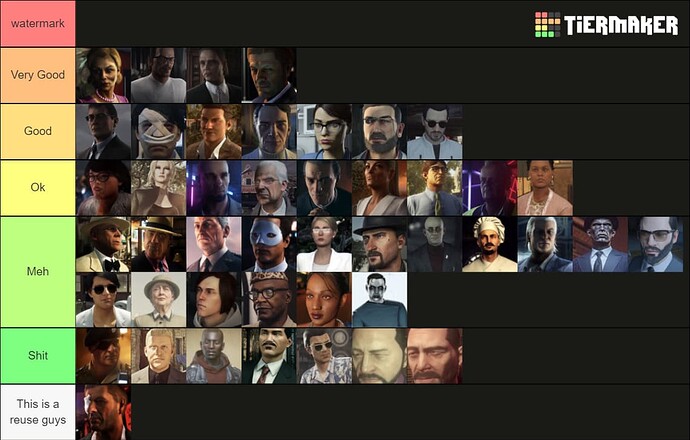 I’m going to treat the Guru and the Congressman as two separate targets because that’s how they originally were. Never played Gary Busey and idk what the Caruso brothers are doing on the list.
H3 targets were definitely the best ones but every game has had one top tier target.

I’m worried you said the politician is a good ET?
Are you ok?

In fairness, if you don’t take out the gas lamp then it’s a bit more interesting. Certainly better than the main mission.

That beach walk is still a pain though. 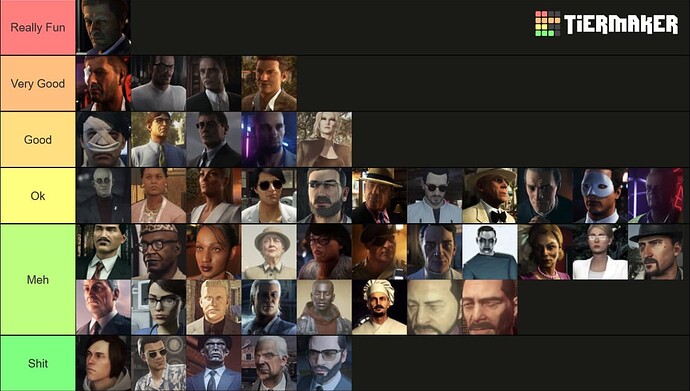 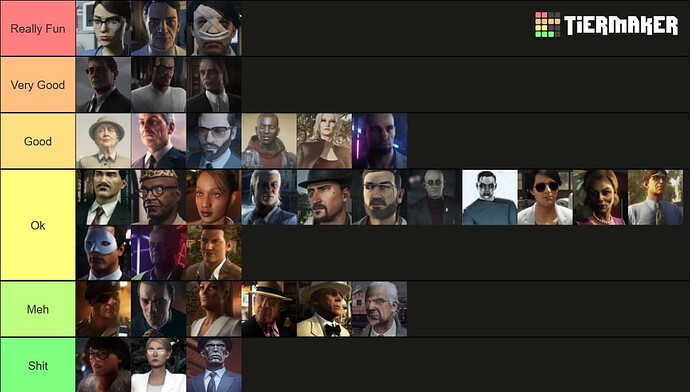 Yeah I really like Hokkaido and Dartmoor, is that so obvious?

ETs in the “good” tier feel pretty decent, they’ll generally require a bit of stealth and originality. I might rate the Bad Boy a bit too high since I only played him a couple of times but this is what he gets for being so damn sexy.

ETs in the “OK” tier are kinda generic. Most of them can be sickened or propane’d in 2 minutes without much problems.

ETs in the “meh” tier are too random. It’s a start scum fest to get them to spawn in the right place everytime (apart from Iconoclast maybe, but I could never find where she spawned and she always feels very random to me, sometimes I can poison her in 2 minutes and sometimes it takes 15).

I absolutely hate all ETs in the “shit” tier. Appraiser feels like they did everything they could to make the mission as annoying as possible. Her path intersects with Zoe’s in the worst possible way, you have to get her stupid book everytime and leaving the level’s a chore because the helicopter’s no longer there and the warehouse doors are locked, so you have to go all around the level to get to another exit. Pharmacist never does anything interesting other than sitting under Dalia’s chandelier (but maybe not having to do the mission with no loadout can bump her to the “meh” tier). Entertainer is OK by himself but I can’t stand having to get his stupid guest list everytime.

Obviously I didn’t include Undying and all the others since I never played them.

I love that you included the brothers. For nerdy reasons I won’t go into here, I actually got to mess about with them a while back and…yeah…let’s just say be glad they were cut, they’re just not very well designed.

Sod it, This is a video idea and a half, and an easy one to make too! (Editor Dribbles: “Great, more work for me to do”). I’ll reserve my judgements for them for that.

Thank you for putting The Ascensionist where she belongs!

I agree with the sentiment about the H3 ETs but I have to question your placement of The Undying Returns. It was just an excuse to milk that sweet Sean Bean collab and IOI didn’t even try to hide by altering it in any way or putting it in a different map.

I’m worried you said the politician is a good ET?

Here’s my list. I rated them based on playing them SA/SONKO. Only 1 rated as shit cuz I couldn’t play it SO (meaning I couldn’t choose my suit). 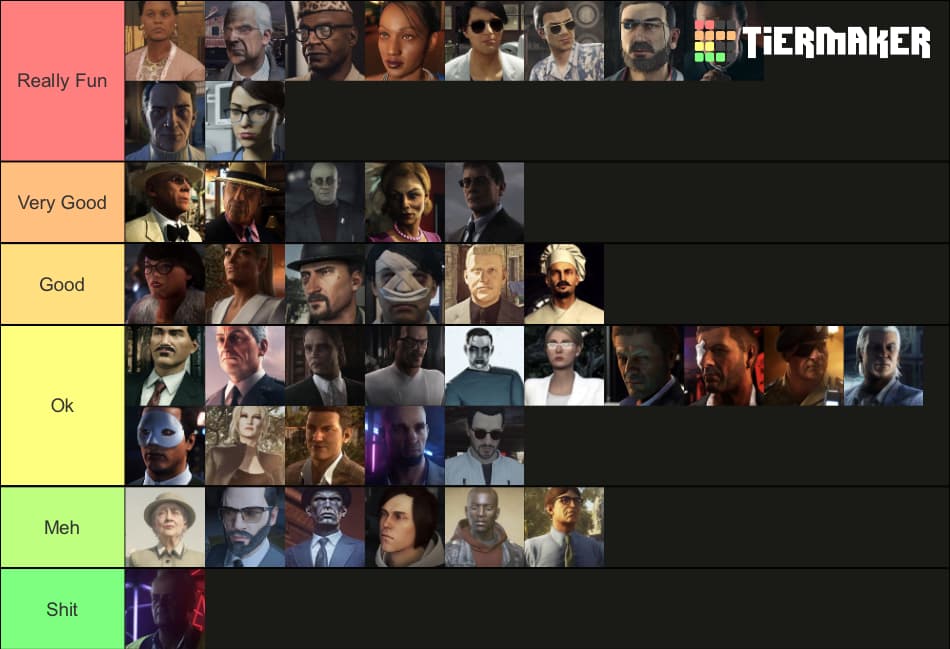 Well I treat the Undying returns the same way as the original. Maybe it was kinda cheap but it’s the same ET so I put it there. I’m just evaluating the mission, not the decisions behind it.

I’ll also add if we count the Sarajevo Six as ETs, they’d also be in my “Ok” list besides The Mercenary. He goes into “Shit” because he has AI that hunt you based on proximity, regardless of disguise, cover, or actually being seen.