From begining of new Hitman series I didn’t understood how developers make weapons unique in their own way. I always wanted to use them depends on situation. But with current system - no one uses nothing besides W2000 Ghost because is best sniper weapon in game in any means (this also applies to Krugermeier 2-2 and so on). There is always one weapon from each section that is just best in any means. That also applies to other weapons - there isn’t any pattern.

That’s why I’ve redesigned whole idea of weapon system and sortet them by Rarity and abilities. Every weapon is now unique and depends of situation - usable in own way. I try to sick current system and do not change if that is not necessary.

Probably IO Interactive won’t even look at it - but I hope since Freelancer mode is on way - that might be a some kind of inspiration for them in future updates.

Explaining abilities
So i’ve used already created ones but added few new ones (which exist in game but weapon descriptions don’t highlight this).

Pistols
Base ability of pistols is “Holster” which allow hide pistol under outfit. Base capacity for shotuns is 2 but legendary can decrase this by 1.

Submachine Guns
Base ability of SMGs is “Full Auto” which allow shot with full auto. Base capacity for SMGs is 3 but legendary can decrase this by 2. 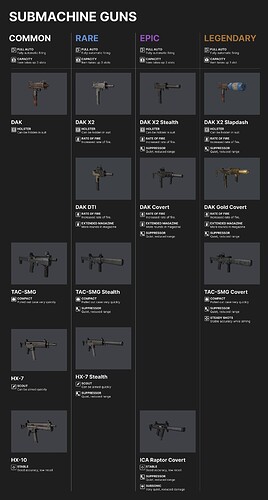 Shotguns
Base ability of Shotguns is “Splash Damage” which allow to knock back the body after a shot (just like Striker). Base capacity for pistols is 4 but legendary can decrase this by 2. 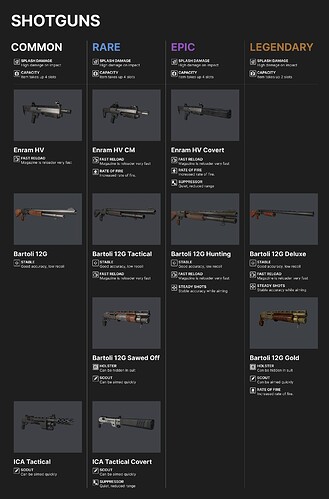 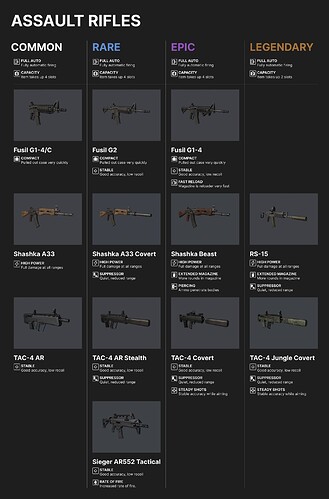 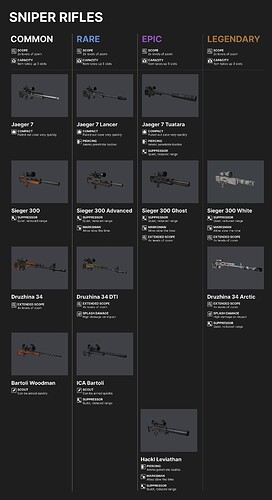 What do you think about this?

I really like the idea, and I do agree that giving you a reason to use the other weapons would be a great addition.

Good job, and I hope they take this into consideration when making their final tweaks!

The statment about a weapon being the best in its category is maybe true, but there are still scenarios where others are more handy or more theme appropriate.

I have myself preferences on guns and so on, but making the system different for that is not really necessary by any means.

All weapons are fun in their own way even now. There are reasons, like HAVING FUN, to take some weird weapons on a spin. (Like the silenced pistol from train has maybe a low number of ammo, but the sound of it is enough for me to take it see the world)

But my idea doesn’t change that in any way - you still will have fun playing a weapon what you like, but it allow you also see what abilities weapon have.

What is missing in game - a real firearm statistic where you can by icons/abilities look what kind of weapon is that and for what it will best. There is a plenty of pistols which works diffrently but game don’t show that in description. For example Bartoli 75R and Bartoli 75S act little different - one have better accuracy and more power - but description doesn’t shows that. From description looks like that same weapon. And this is the point.

Striker and Striker V3 looks similar, but V3 have a little more ammo in magazine etc. But from other hand - there is plenty of weapons who works exacly that same, there is nothing besides how it looks - to make them different. I don’t understand logic behind current weapon system, there isn’t any.

I just don’t like how this is chaotic. And since Freelancer sort them by rarity - this is a good place to rethink that system.

So you are basically doing a new description system ?.. yeah, that could be cool

Mostly yes. But for some of them added new abilities to make them little diffrent - but this is my idea to enhance whole system. So you acctualy will know in what aspect this weapon is better/worst from others - depends on what you like/what you need.

Compare them side by side and you’ll understand - because in my weapon system idea there is a logic behind it.

Yeah I see the logic and why a description system as pushed as yours would help the game… I haven’t really read the whole thing since the begining kind of made it feel only as a change to make all weapons “balanced” (which is not really important since the game is singleplayer), but making the descriptions more detailed for weapons would help

The one they have now is not bad, but yeah… there is always space for amelioration

I see now you want you mean. I don’t care about balance - like you mention it’s a single player game. But all what it matters for me - its logic and that every weapon have a specification so I will know for what I can use them.

For example - why Sieger 2000 Ghost can be asembled instantly and other Sigerers not? There isn’t any logic behind this and looks more like a bug that feature.

Yeah yeah I completely agree with you that the description system could be improved… it’s not like the most necessary thing to do, but if they have the time they should put it in