The tutorial for making contracts is set on freeform training, but you cannot actually MAKE any contracts on this map for some reason. Now that we have The Author and Patient Zero retroactively added to contracts mode, what are the chances for Freeform Training? I know that opportunities would probably be limited but I’d be intrested to see what people come up with. It would be fairly easy to implement too, considering Freeform Training is technically already in contracts mode, just tutorialised.

Same, but people still want it though.

At some stream during H2 Travis pointed out they don’t plan to do that.

I would kinda like that, but if you roam that map and be honest to yourself, there are not many good contracts to do here given how tiny the ship is.

Meme I made 2 years ago 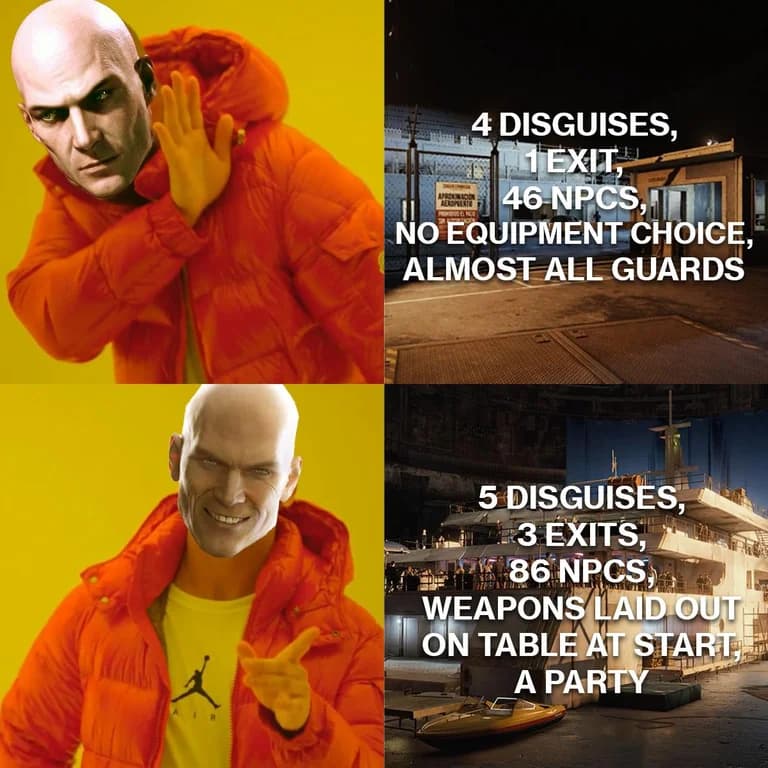 I don’t get it but it looks funny to me.

I thought that’s what it was trying to go for, but assuming it’s from the perspective of the developers who choose to put it in Contracts mode, the two images of 47 being swapped would make it funnier. If it’s not for the developer’ perspective, then I’m afraid I still don’t get it.

“Drakeposting” refers to a common meme of using two screen captures from Drake’s “Hotline Bling” music video to denote preference of one thing over another. The top image would be of Drake turning his head away from an adjacent image or text with his hand extended as if to reject the image outright. The bottom image would then be Drake looking at another adjacent image or text with a look of satisfaction on his face as he points to it. The implication is that he (or the user posting the overall picture) prefers the bottom thing over the top thing.

As Kevin Rudd explained (in meme AND in post), Freeform Training has more options than The Final Test, yet the former has no contracts mode while the latter does.

So it’s from Kevin_Rudd’s perspective, and not a joke on how they decided which to use for contracts, in which case it’s backwards. Ok, got it now.

The boat party does have more NPCs one could pick for targets, but they’re too densely packed together. That’s a sure recipe for a headache contract (or however many one could possibly make - they’re likely to only be a headache).

There was a modded contract (I forget who made it, probably Kevin Rudd) where (an) “Isabella Caruso” was a target. She’s on the next to top level I believe. When I played that it I had to distract a good number of NPCs up to that level, KO them, move them out of sight… until I finally got her to come up and killed her up there.