Ghost Mode is what I’m waiting for a revival

I’m already planning out my overall strategy for the mode itself.

Been wondering if I should approach it with some strategy or just decide things spontaneously. At the beginning I’ll probably concentrate on collecting weapons and might base my syndicate choice on the map pools. Sgail and Dubai for example have guards with silenced, concealable SMGs, right? Seems like a good place to start.

All I had in terms of a plan was taking on Espionage syndicates when starting out unless maps aren’t desirable, mostly since I already follow most of its objectives when playing the game normally. Also because it didn’t seem to have as many bonuses requiring specific gear to accomplish compared to something like Arms Trafficking, Psy Ops or Eco Crime. Thus I thought it could be a good early Merces source.

I think when I get home from work I’m going to most likely focus on maps I didn’t get to play in the Closed Technical Test. Mostly assassination-style contracts too. I’m looking forward to it!

Same. I don’t even know what the mastery stuff is, I’ve seen no leaked past 25. Although, since I already know things that I want to be unlocked for main game play won’t be included, I’m less anxious to see it. Still, I need to know what I’m striving for with the safehouse.

I partly want to see what they’d put in 100 levels of Mastery, but I also really want to be surprised by some of them, if they’re special weapon or suit unlocks.

I’ll be holding off on looking, and I hope others at least have the courtesy not to spoil some of the final unlocks right off the bat. (If thats not too selfish of me!

However on some of the maps there are guards who do have silenced weapons, even with freelancer changes:

And Santa is not real by the way.

you can’t be sure of that.

Screaming_Meat, you got me there. I still want to believe.

Is there coordinated publicity with Freelancer?

Freelancer is apart of the next HITMAN Build/Update that will release in a few hours and isn’t DLC you’d acquire from your storefront. If anything the publicity of any sorts was the Technical Tests that have taken place both publicly and privately over the last few months.

There is a possibility reviewers got access to the build early, but we would have heard about it by now.

Me going to bed knowing Freelancer will be downloaded when I wake up.

I’ve got a long work shift tomorrow, but it will be pretty great to be able to come home after and unwind (or get frustrated lol) with Freelancer’s new systems and ways of progression…

Yesterday I bought snacks, sorted out all my errands and now I have over a week to sit back and enjoy freelancer. Can’t wait!!

Obviously the very first thing I’ll be doing upon loading the game after today’s update is checking out the new Challenge requirements for the GOAT challenge etc, and either whooping with joy or crying in despair depending on how much the ridiculous levels from the CTT have been reduced to something sensible or otherwise.

Before Freelancer’s all out and ready, I just want to touch upon the Syndicates, and how IOI seems to have really tightened them since the initial concept.

The original Year 2 Reveal had much more Syndicate “types”, but they didn’t have any optional objectives related to them, and their “Logo” was always random.

This current iteration of Freelancer has only 8 Syndicate types based around different playstyles and actions. This makes finding your preferred type easiest.
They all have the same logo, every single time, and is further proven by “Trophy”-looking Challenges with those same icons, related to clearing that specific Syndicate X times.

What’s interesting is that the “Syndicate Defeated” cutscene we saw in the CTT shows off a lot of the early alpha icons that have now gone un-used. Interesting detail, is all!

(Top layer: Syndicate Folders in the CTT)
(Middle layer: Unrelated icons that flash on-screen in the Syndicate Defeated cutscene)
(Bottom layer: Early Alpha Folders, with some familiar icons, but have since been removed) 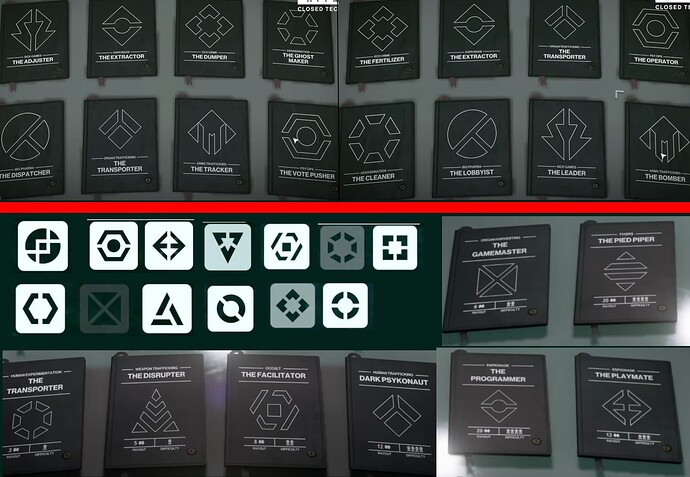 If there is to be anything new in the coming year, I guess there could be a chance that some old “Syndicate Types” are released, but I kind of doubt it given how tight the 8 always available are…

Part of me was hoping the syndicate list was just heavily trimmed down for the CTT the same way map pool was, but at the same time I don’t really expect much to change from CTT besides the confirmed tweaks. Either way, only a few hours remain until everything is unveiled.

EDIT: Now when I think about it, I don’t even have a clue of what kind of objectives could be squeezed into a new syndicate at this point, but that could just be me.