So we received three deluxe escalations out of the box, which were very nice, with good rewards. If I’m reading the blurb correctly there are another three to come as well in the future? Logic would dictate that these would be on Berlin, Mendoza and Carpathian maps and I’m curious as to whether players think this will happen, and if so whether they will stay in keeping with outfits and themes in homage to the previous games…

If so would it be unreasonable to guess a Meat King theme for Berlin, a Vintage Year theme for Mendoza and an Asylum/Aftermath theme for Carpathians?

I think it’d be cool if they continued making escalations/items based off of older games. But may I suggest an alternative idea:

An Absolution themed one for Berlin. Gotta have representation for all the games in there and I think Berlin fits the vibe of Absolution the most. Maybe we can finally take out Birdy/Cosmo like people (for some reason?) keep asking for

Yeah to be fair, the brother is the main (normal shaped) antagonist in Meat King. You could dress in S&M gear or as a butcher but as a suit that 47 might keep those don’t fit the bill. An Absolution suit from Berlin might work better.

As for A Vintage Year - this seems more of a no brainer, but the Delgados… Fernando’s suit - seen in the Hitman 2016 teaser, playing the cello - is very similar to some of 47s existing ones, or most especially the Sunset Suit available to Stadia players of Hitman 3 (though he has a pink shirt and no tie, and that has an awful orange shirt and clashing pink tie). Manuel looks a lot like one of 47s casual warm weather jacketless suits only with a pink shirt.

Anyone have any ideas for iconic costumes that 47 might have kept in his wardrobe? I get a kick out of the fact he liked Anthony Martinez’s style and kept that devil suit… 47 has a habit of doing that, he has taken a number of outfits from targets and civilians and added them to his wardrobe through the years. Almost more fun than the weapons and gear!

I mean you have to look at the Murder of Crows ones right? But I think during the Hitman 2 dev vids they said that they wanted to keep the suits grounded so they were things someone might ordinarily wear (not a disguise) then they did the blue flamingo which did NOT count as a pink flamingo!

Anyone have any ideas for iconic costumes that 47 might have kept in his wardrobe?

Some personal favourites from Absolution are 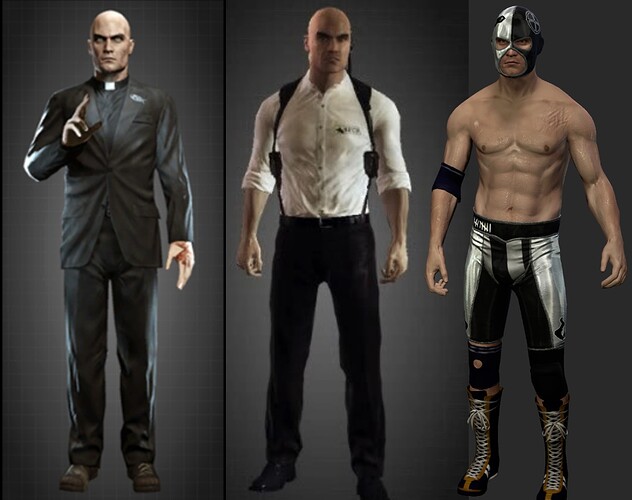 Maybe they wouldn’t add a second outfit from “A Dance with the Devil”’, but with Martinez’ suit in Dubai representing that level’s heaven party, how about Maynard John’s devil suit for Berlin to represent the hell party?

Probably wishful thinking and also not something to lock behind a paywall, but for the Carpathian mountains escalation they could add a Providence guard outfit that gives armor/extra health to help with more action-oriented gameplay.

Now you’ve posted these, and particularly the middle one, it’s reminded me - the jacketless shirt, red tie and gunbelt combo from the Pre-Absolution Sniper Challenge would be a cool suit for ingame use (aside from having double holstered pistols that you weren’t using/weren’t dynamic). Also they absolutely must have an escalation unlock the training/patient zero suit. I’m shocked that they never bothered to unlock the Bond style jersey and pants outfit in either 2017 for GOTY or when they imported the H1 content into H2. It’s a simple, cool outfit, its been in the files since Hitman 2016 and it should be unlockable for everyone.

As for A Vintage Year - this seems more of a no brainer, but the Delgados… Fernando’s suit - seen in the Hitman 2016 teaser, playing the cello - is very similar to some of 47s existing ones, or most especially the Sunset Suit available to Stadia players of Hitman 3 (though he has a pink shirt and no tie, and that has an awful orange shirt and clashing pink tie). Manuel looks a lot like one of 47s casual warm weather jacketless suits only with a pink shirt.

Well, I always thought of Manuel´s attire being a throwback to Pablo Ochoa, who also wore a white suit / pink shirt combo. And frankly, I´d love to have that suit (the Ochoa version with the collar out and golden cross necklace) for 47. Especially if it came with an M-60

I doubt the other three Escalations are going to include new suits. I’m sure they would’ve mentioned them in the promotion as a way to increase sales.

Unless maybe they’ll wait a year until the release of the game on Steam and before releasing the three other Deluxe escalations together with three new suits to encourage people to buy the game.

Honestly I want more content for the Deluxe pack as the art book definitely didn’t hold up to my expectations (it’s a bad recap with a few pictures you could take in game) [I thought it be more weird fun facts some scrapped ideas and maybe unfilled story on side characters]
Because it’s the price of half the game. (not complaining just feedback).

Oh no I already have both bc I’m on PC

And where did you get?

Yes I got it yesterday, a few days ago they aren’t.
Thank you

Maybe even before Steam. They might include extra 3 suits to convince some remaining Standard players to upgrade do Deluxe.

Now, on the speculations… I’m confident anything in Berlin has the potential to be my favorite escalation, and I already liked the initial 3 a lot. I’m not sure Carpathian Mountains would have one as it’s hard to imagine an escalation working there… so my guess is the 6th will be a second one for Dubai/Dartmoor/Berlin/Chongqing/Mendoza

and apparently Berlin will be the last one,
I believe this is my last chance to get my wish , for a thrash \m/etal “killing is my business” Megadeth vibe
Hitman contract , fulfilled !!!
When I got my 1st featured contract “Symphony Of Destruction” back in H2 , I suggested we got the Vic Rattlehead outfit, so I hope we ll get something like that as well for unlock. 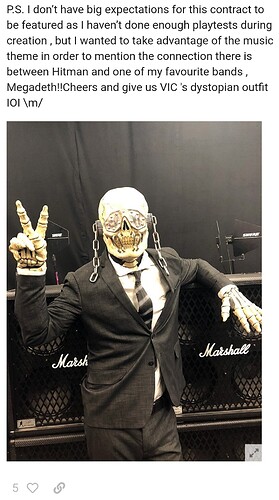 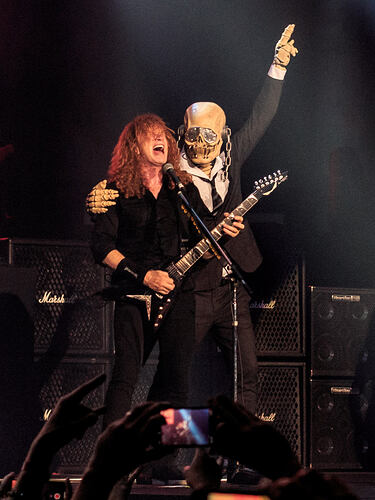 A dystopian 47 in a metal concert !!! 47 has already demonstrated his skills in drumming at Bangkok so he might as well play some heavy riffs !!! Plllease IOI

Give us at least a nice headbanging vibe in Berlin !!!

I just want the sniper rifle or katana to be inscribed “やめ”.