Got some polls for you guys!

Which location, out of the revealed ones are you looking forward to the most?

Will you play the VR version?

We have a special thread for polls here:

You can post your polls in this thread.Polls don’t have to be Yes or No.They can be anything except trivia questions. The original Yes or No topic was created by Jacques-Shadow and its sequel by Accidental-kills98.

But aren’t the polls posted there off-topic? Mine are fully related to the Hitman 3 topic, so shouldn’t they be under the Hitman 3 category?

That thread is for all polls.
Imagine if everyone of 100k users create a separate thread for each poll they want to create…
It would be a total mess

To be fair, Yes or No is mainly used for gag polls. Whereas this thread has the user wanting to get actual data. So I don’t see the harm in it really.

Yes or No is mainly used for gag polls

Who told you that?
As far as I know that thread contained more or less serious polls and collected quite an actual data in the answers

I mean, noone told me that. It was just an observation. I still don’t believe there is anything wrong with this specific thread existing, especially as it is Hitman 3 related specifically.

Have a look at that thread and you’ll see that we already have a few HITMAN related polls there.
I don’t think they are gag polls and contain unreal data

I swear every time someone asks which level I’m looking forward to the most, I tick a different answer. 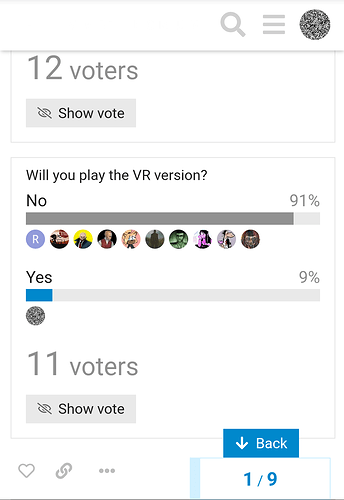 This poll thread is okay. As long it is related and also the forum is new so… of course there shouldn’t be multi threads about the same topic so make maybe this to one mega poll thread for H3 related poll’s or something like that.

I voted Yes for VR as long as it releases for PC and not only PS5.

Since I’m a Xbox player, VR isn’t an option. I’d try it if it was though.

I voted no because I won’t play it at launch,but I am going to buy a VR set sooner or later.

I swear every time someone asks which level I’m looking forward to the most, I tick a different answer.

You are not the only one.I am most excited for Dartmoor(for the Beldingford Manor vibes and for the detective mission story) and Chongqing(for the atmosphere:the rain and the neon lights look amazing!) and the answer changes from one to another depending on how much it is known about the missions at that moment.Right now I know more about Dartmoor,so my vote went to Dartmoor,but when I know more about Chongqing my answer will most likely change.

I do not know why I am so excited for berlin… I just am.

Many are saying that Berlin is supposed to be a creepy looking setting, judging by the photos we have seen. Maybe that’s why you’re excited!

I voted yes for VR, but I will not play it directly. I have to buy a VR headset first and I think that will take some time. But I really want to try it out!

didn’t expect to see Dubai the 4th in the poll (i personally voted for it, it’s the closest to a high-end luxury map of the four we’ve seen and i prefer those aesthetics to the dark edgy visuals)

I think Dartmoor is the least exciting for me

I was surprised too. Guess it’s just that people are way more hyped for Dartmoor and Chongqing as Dartmoor is a new murder mystery style concept and Chonqing as it brings rain into Hitman again.