Could it be as simple as placing one coin per chair!?

Doesn’t appear to be. I even tried placing them in alphabetical order as per the name of the magazine on the chair.

Unless different NPCs sit in certain chairs and you’d need to give coins to each of them. But I’ve only noticed 2 NPCs that sit. One lady in the laundromat, and some older man that walks around wearing a white jacket.

Edit: So, if that were the case… Would every NPC that sits in the chairs have to all be there at the same time? That sounds like way too much of a headache.

There’s always a soda can and/or coin and/or soda machine (to use the coin) in the areas with cats.
I’ve tried some things with soda cans with no results.

There’s ceiling fans and desk fans that like the cats will stop moving if you shoot it. Disabled all cats and fans with no results either.

Just noticed there are seven coins on this map, so giving one coin to each cat might be nothing.
(unless there is a super secret neko-statue that noone found yet…)
But it seems a little suspicious how you can place a coin right into it’s paw when you stop it in the right position, I mean it snaps right into it. 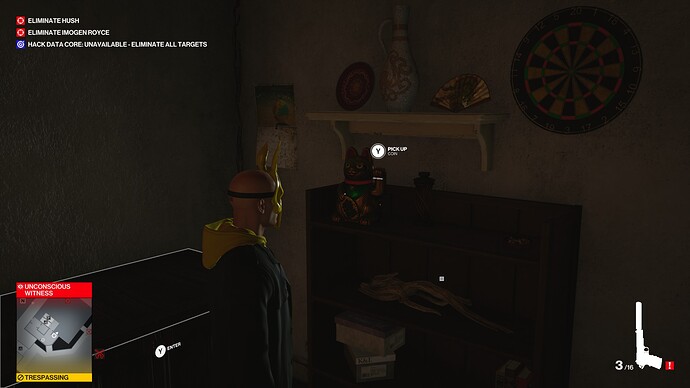 For the statues that are too high; if you throw the coin at just the right angle while the arm is moving it can stick to the paw and will stay there if you stop the arm.
Tried to stop the arms in a vertical position with coins in them but still nothing. Placing a coin in front of each one and then shooting them makes nothing happen either.

The six meows on the sign could mean that there is some noise they make when doing the right step, just like the graffiti in berlin.