Has IOI even acknowledged if they're going to patch "UNLOCK FRAME RATE" In the Xbox version?

Furthermore, did they even announce anywhere that the Xbox One version wouldn’t have this feature, before release?

If I’m being perfectly honest with y’all, as a long-time Hitman fan, I feel tricked by IOI. I bought this game thinking it’d have the features of the other versions (safe to presume, in modern-day gaming) but Microsoft won’t even let you refund a game once you’ve launched it… Which was where I found out that this wasn’t a feature anymore.

I’ve been refraining from even playing this game because IOI haven’t addressed whether or not they’re going to patch it in, and honestly I just want a firm “yes, we plan to” or “no, we’re not planning to” when it comes to patching this feature in, but IOI is straight-up ignoring everyone on Twitter who asks about this.

This is peculiar given that the Series X and One version of the game are almost identical outside of the Series X Upgrade Update.

HITMAN 2 has a Frame Rate unlocked in the settings so it’s a little strange in my opinion that it didn’t appear in HITMAN 3.

This might be addressed later, but currently they are locked to 30 on XB1 and 60 on Series X.

that is shocking. its bad enough that last gen is an afterthought for them already, never mind how half the people that want a next gen console cant even get their hands on one

That’s part of what bothers me - Hitman 2016 and 2 both have the ability to play faster than 30fps. I don’t think it’s unreasonable for me to assume that the third one would, especially when it’s not a weak console (given that its hardware is stronger than the PS4’s, which also got it, like I said) and I feel like all I want from IOI, at the moment, is to stop sweeping this under the rug like it doesn’t exist.

So many people bought the Xbox One version only to find out that it’s capped at 30fps, and again, I feel like IOI was dishonest by not being upfront about this. I didn’t hear a single word about this until after the game came out… And I had already preordered it.

I want from IOI, at the moment, is to stop sweeping this under the rug like it doesn’t exist.

I don’t think it’s them sweeping a Frame Rate Unlocker under the rug, you have to consider this game hasn’t been out for two weeks yet, and we also have yet to see any patches let alone Content Roadmaps.

HITMAN 2 has capped at 30 FPS on the One X, but that’s with the Frame Rate being locked. With that in mind when it is unlocked it’s not a drastic increase as is.

Has always been the standard across the whole Trilogy with the only variance being 4K Resolution/ HDR if your Television/Monitor can support it.

I feel like IOI was dishonest by not being upfront about this. I didn’t hear a single word about this until after the game came out.

Assuming IO was being dishonest about the Last Generation performance was far from the truth. They aren’t gonna explicitly address the older hardware primarily due to it being considered “obsolete” in today’s standards. This isn’t out of disrespect to the people who play on PS4 or Xbox One, but it’s just the shift in the industry and acknowledging the newer Generation of Consoles and what they can do. 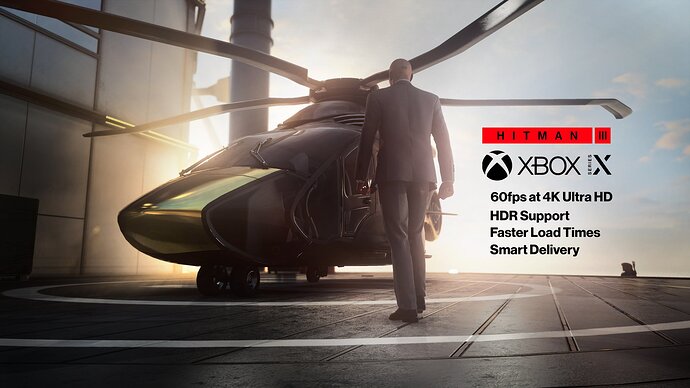 Back during Hitman 2 IO did the same with the Xbox One X and advertised that it could run at 4K 30 FPS with HDR this form of communication is nothing new and has become a industry standard during the previous generation and is more heavily emphasized with the current one.

What I meant by them sweeping it under the rug is the fact that they’re refusing to acknowledge -anyone- who mentions this on Twitter. I cannot find a single response from them concerning this anywhere on their account. People keep tweeting about this to them and they choose to keep responding to other people coming through with the exact same couple of problems.

Even if each game before it was initially capped at 30fps, the feature to unlock frame rate has always been there, and most players go to uncap it immediately after learning of its existence.

I hope IOI addresses this in a patch, I do, but the fact that they’re not even acknowledging any of the people tweeting to them about this is concerning. I honestly wish I could get a refund, as it stands. I paid $80 only to find out, after launch, that having an unlocked frame rate isn’t a feature in this one, despite being in the previous two.

All I want is for IOI to acknowledge this soon, one way or the other, just so I know whether I’m waiting for nothing

Generally speaking immediately after a launch a company will try to create a list of all the issues and then triage them based on things like how widespread they are, the potential to create more problems, their likelihood of fixing them in a timely manner etc. There are a few models for calculating the priority.

Frame rate unlocking is essentially a quality of life feature that could create problems if other issues are present, so it’s likely they can’t address it until they are confident that they have resolved all possible issues that overlap.

Until then, responding to people asking about it is likely to unproductive since all they could say is “I can’t say anything at this time.” and then have people demanding an explanation of that.

They have literally thousands of people demanding things from them right now, they have to triage their support teams time.