Can anyone confirm the patch size?

you can find the location in the menus, located after the Carpathian Mountains

Well, I’d rather prefer the mission located at its right place (between WC and Isle of Sgail) within the WoA timeline, rather than after Carpanthian Mountains.

Cross season ETA contracts! Been waiting for this for a while!

We’ve resolved an issue where NPC’s could get stuck in an endless animation loop after being injected with a sedative syringe.

finally. Now this we’ve been waiting on a fix for a long time…

We’ve updated the description of the Number Six with Gloves suit. Just in time.

We’ve ended the conspiracy theories in Berlin and removed the barcode from the back of GuestList Man’s head, aka Ziegler. He was never part of Ort-Meyer’s army and now, he never will be.

Dang. I wonder how that ended up there in the first place? Zeigler looks nothing like 47, so how did he get the barcode tattoo on his model’s texture? Did they just edit 47’s model and change the face? Why not any other NPC?

We’ve resolved several issues that could cause NPCs and (especially!) targets in Haven Island to see through several walls and floors. This was a complicated and tricky issue to address but it seems to have been caused by an AI vision blocker in the door template for this level.

Took a dang while for this but I’m glad people (PC for now) can play Haven in peace. Very glad for the explanation too. NPCs walking through Doors caused this? Bugs are really really weird.

Give us a Sprint Toggle Option for the next patch… Please!..

I also think The Raver should be in “Casual” instead of “Themed”. If it came with the mask I could understand it in “Themed”, but right now to me it seems pretty similar to the Smart Casual Suit and more deserving of “Casual”.

I posted this in June of last year, and now they’ve actually made the change so The Raver is in “Casual”! 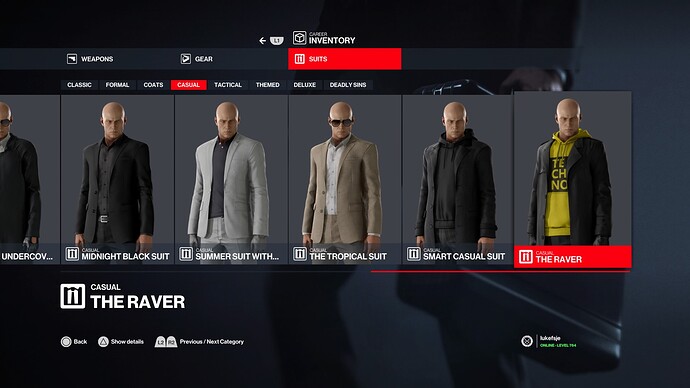 Well at least you can’t use it to leisurely eliminate a target with an accident kill at anytime and anywhere with no risk of getting caught which is exactly what the shock phone did.

Finally! I’ve been complaining about that MSS glitch for now and its fixed Now! Also Ashens suit issue I wrote directly to Travis got resolved. And HSF too, So many long time issues has been fixed. Ty, IO!
Edit: Can someone please check on coconut behind bar in Hangout Area and if Almond’s dagger is Still unplacable on all surfaces? I am currently off computer.

Anyone else keep getting disconnected? I guess the server might be overloaded with too many people at once playing the new map. It’s taking like 10-20 secs to open an item select menu, load a save, etc.

Perhaps limit access to those who preordered the game originally until August.

The question is: Will the Molotov Cocktail act as a fire accident kill? Or is it just to ignite stuff?

I also really like the widget for the gameplay settings!

Stingray: Villa Vision
We’ve resolved several issues that could cause NPCs and (especially!) targets in Haven Island to see through several walls and floors. This was a complicated and tricky issue to address but it seems to have been caused by an AI vision blocker in the door template for this level.

Essentially, whenever NPCs opened a particular door type, they were able to see everywhere within the mansion, regardless of how many floors or walls were in the way. This was especially troublesome if Tyson Williams was involved, because his character animation has him looking down frequently, which meant he could spot 47 several floors down.
Note: Unfortunately, this issue will only be resolved on PC with this patch, and will be included in our next patch for all other players.

Finally. Thank you @Travis_IOI and the whole IOI team.
Was quite of annoying when 47 is in the server room doing his stuff and suddenly Tyson spots him, being on the very highest floor of the mansion.
Now on to other wallhack stuff fixes hopefully. Because there are quite a lot of them in the game

The question is: Will the Molotov Cocktail act as a fire accident kill? Or is it just to ignite stuff

Its not in any of the campaign tabs so honestly? I think its good where it is. Its a part of Hitman 3’s rollout so it should be in there to show that it was made for that game

I found a “bug”. When you leave the map with Grey in the helicopter, Grey has a hole in his chest and bloody hands

I know that model of him exist, being in that coffin, but he shouldn’t sit like this in a helicopter. It’s not safe, flying with such a wound!

Something weird… On PS4, ater the patch, the June roadmap is now shown on the main H3 screen.

A really important fix happened to us PC players: 47 finally turns realistically and slowly when turning him around via the keyboard. The instant, robotic movement is gone. I had given up hope on that long ago.

Can anyone else on PC not load save games? Or is this because I left some old mods on (SMF doesn’t currently work so if I remove the mods I won’t be able to re-deploy them)

I did a Master mode save on my first session in Ambrose after I killed Crest, but now I have to start from scratch, didn’t even get to finish my first playthrough

You’ll notice the load menu doesn’t even have Enter key as an option, but the save menu does 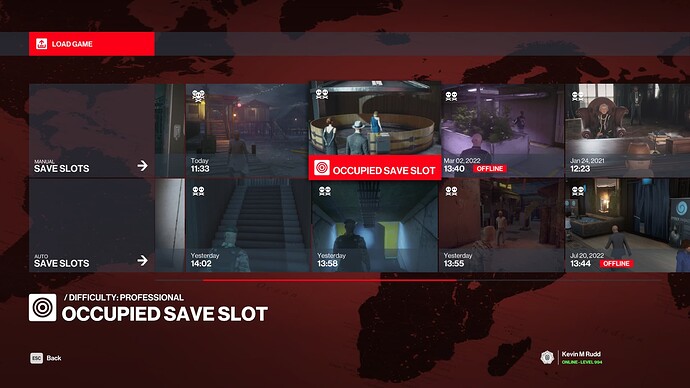 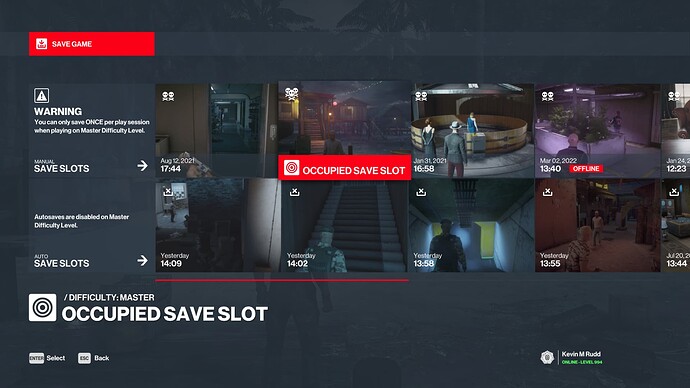 Edit: I removed mods and it still doesn’t work for me on EGS, but it works on Vanilla Steam

UPDATE: Nvm, it was because one of the save games takes place during a mod I no longer have installed (Noodle Massacre), apparently that ruins the entire load game function

Still have to redo a playhthrough from scratch tho

This update is pretty hefty in terms of QoL improvements and bug fixing, also great to get confirmed a new patch is coming sooner than later.

And a huge thank you to the team for Ambrose Island, one of the best maps in my opinion!

Actually that might be better. If they put it into the campaign, it would slow down the pace of the story (not to mention the cutscene style wouldn´t fit well between WC and Sgail). Probably better if they put it alongside the side missions from H1. Or if they by any chance make one more bonus mission in the future, they can just create a separate category (probably unlikely).