I’m having problems with Hitman 3… Every time I attempt to restart the escalation, I get a disconnected error message (See picture for reference) This has been happening since last night and I assumed the servers were playing up. Because of this error, I am unable to get my unlocks or even place on the leaderboards. Is this a known issue or have I just been unlucky enough to have this problem? I’ve tried restoring licences, unlinking my IOI account, even trying a different wifi connection, but I’ve had no success. Any help would be greatly appreciated as I just bought the full 7 deadly sins bundle and I’m unable to finish it😂 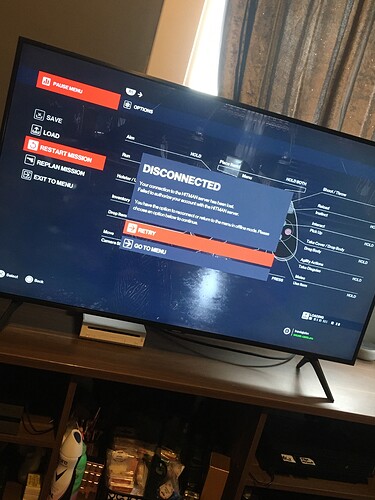 I am on playing on PS4

I play on PS4 and have a particularly weak/unreliable internet connection and often get disconnected when trying to restart or replan missions. I would check your internet connection strength, but if it’s fine everywhere else except this one escalation then clearly something deeper is going on. Best of luck either way

Hmm, seems like a more general issue with the game then. Honestly, I’m not too technically savvy so I can only give what I do, but sometimes I do just have to fully shut down and restart my PS4 to fix my H3 connection. Stupid but if it works it works

Thank you anyway. I’m hoping someone has the same issue and knows a fix or it gets to IOI.