Why not to make in Escalation Contracts instead of check mark you passed, make something like gives you a rank (professional or silent assassin…) depends how good you pass the mission. Thus you will be drawn to replay for the best rating, and not run quickly on assignment to get check mark fast. Here is an example for you, I would like to on the main missions too. 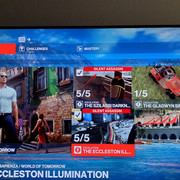 It’s a massive No from me. I don’t mind Escalations as a format (albeit I actually prefer some of the earlier more freeform Escalations from H1/H2 where the Disguise/Method etc weren’t so rigidly enforced compared to the H3 Escalations), but there are plenty I have absolutely no wish to replay and even more that I’ve got even less desire to replay AND get Silent Assassin on.

For me, the best Escalations give you a fun window showcasing parts of the level that you wouldn’t normally interact with too often on main missions, and are Just Get The Job Done affairs rather than You Must Do This Perfectly chores.

Don’t know whether I’ll be in the majority or the minority on this, but the OP’s suggestion would kinda ruin the game for me.

I agree with you, I’d rather have escalations where you’re given a ton of freedom to approach the mission how you want without worrying about Silent Assassin. I prefer Gluttony to Envy because Envy’s challenges for doing it SASO made the mission not very fun to me

It’s optional. Not mandatory. So what the op is saying is a great idea.

Not if it’s plastered all over my Locations screen reminding me of how I’ll never get SA on that Escalation in Sapienza with the landmines and the rapid elimination streak it’s not. So it’s a terrible idea.

They should do it on all missions. Not just escalations. I’d like to know which missions (and contracts) I’ve got SA on. Not just completed it, for hence, motivation.

Be a glass half full, my friend.

There’s no way I’m EVER getting SA on a lot of Escalations across the Trilogy (and nor would I want to try), so a change like this would feel like the game punishing everyone but the small subset of hardcore perfectionists. You guys who want to SA (or SASO, or SASONKO) every last ET, Escalation and Featured Contract can still do that, but try not to ruin the game for the rest of us non-hardcore types who (I would guess) make up the majority of the playerbase.

I’m all for having more escalation options… especially if it’s through replays that satisfy new challenges.

At least i like to see this on main missions, in order to motivate yourself to rerun with the best performance!