Hitman Codename 47 was about to have an official editor, but***

Hello guys. This is my first topic here and i wanted to tell you about a curiosity that made the news back in the year 2001 in some forums and that today is a topic that has been buried or at least little is said about it.

It turns out that Hitman Codename 47 was going to have an official editor giving us the opportunity to make our own levels, edit characters, objects and more, in order to give the user a tool that will allow us to expand the possibilities of the game. This tool was being developed by a team of enthusiasts known as “Psyche Productions” in collaboration with IOI who provided part of the code for the development of this application. However, despite the expectation created and the long wait, the story had a sad end and that is that this tool ended up being abandoned without a possible launch.

The reasons were several, however the one that was pointed out was because IOI was with the time counted to finalize its sequel Hitman 2 SA, which is why they decided to discontinue it and dedicate the time to a new game.

Affortunatelly existe some images of how this editor would look, which is surprising: 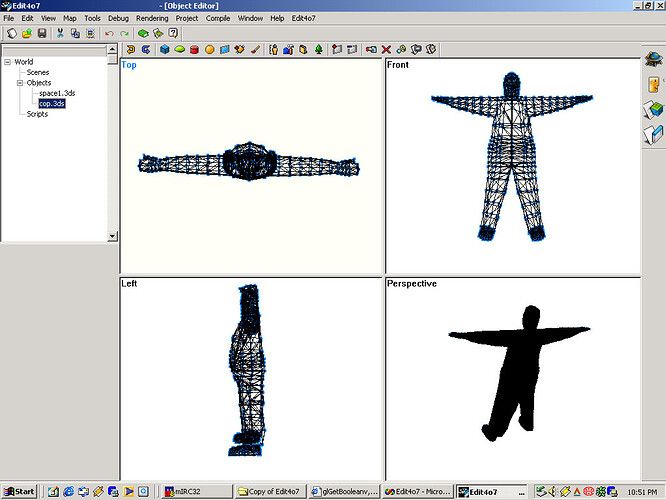 This was their official page:

What do you think? IOI should have released this editor or do you think it would have raised some problems with controversial mods?

I think it was kinda ambitious of IO. Not only would they have to work on an engine and then build a game on it, especially with, at the time, next gen features such as ragdolls and physics but also develop a user friendly level editor to allow mods.
Maybe if they had more money and C47 would have been received more favorably, it might have been possible for such a thing but sadly they had to abandon the idea and just focus of future projects.

Still a nice find @Agente47, I really didn’t know about this

Ambitious, yes, but a lot of what they did with C47 was ambitious. It would have been interesting though.

You’re welcome :). Totally agree. I was one of the many who had expectations for this editor. It would have been great to have tons of story levels available. It would have definitely changed but as you say it was very ambitious and that is not always a good sign. Regards!!!

Since no one who worked on the first game is even at the studio, and they are no longer this tiny group of guys making something new, I’d say it’s too late. Plus what would you spend on it? How many others would spend that on it?

fair point, I’m just imagining it wouldn’t be too hard for skilled programmers/ devs to whip up something to make this old game moddable, I notice they use .3ds files for character models so I wonder just how hard it would be to import all sorts of characters, it would be a dream come true

It would not be difficult if you had the source code. Unfortunately the Glacier engine is very complex and reverse engineering alone is not enough to make a decent tool or the likes of Edit4o7. Regards!!!

I imagine this is how wet dreams look like to @MrOchoa

But honestly, it’s truly a shame this was never released. Imagine a world where it was released to the public… maybe Codename 47 would be much more appreciated.
However, you also have to consider the quality of those user-created missions. I believe that the majority would be forgettable or poorly made… maybe a lot of them would be just joke missions.
Still, I would have loved to use this. Even if my missions would be absolutely awful, the thought of creating a Hitman mission is more than exciting, and it could have brought so much replay value to what’s now considered an “outdated” game.

There is a fan made editor called C47Edit that was released on github back in 2018. Its at the really early state and haven’t been updated since dev got really busy with some college stuff. Its pretty much working and can do a lot of things unless you aren’t deleting anything. As for complexity of Glacier engine, Codename 47 is the least complex and might be even the most easiest to be modified, but sadly has almost zero attention by modders

Developer of the game explicitly alows moding and even suport people creating modding tools with some information is realy cool.