While I do appreciate IO listened to the merch store requests but as minimalist there was nothing for me. Actually I found it all very cringe print on demand/printify type stuff, and even with POD there was no black hoddies.

My suggestion would be to do a few products well. The providence pin button should really have been a pin and I hope those asking for the pin this whole time didn’t settle for a button.

Personally wouldn’t ware anything but black or overtly broadcast that I’m a walking billboard. But I would cop a black polo with the Fleur-de-lis embroidered.

Thanks for attending my ted talk. slides below.

Edit: I was wrong about there being no black hoddies, clicking view all sends you to the featured category not to all items.

My 2nd much more doable suggestion is to also add the source of the clothing in the description.
Are these Gildan, AScolor, Champion ect… 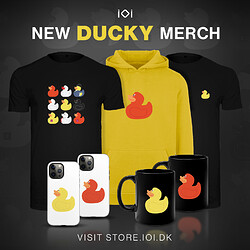 Cheers IOI, will be copping the yellow ducky on black momentarily.

I’ve bought from Amazon the ‘Schylling rubber duck’ since it seems to be the only commercially available ‘Rubber Duck’ that most closely resembles the ones in-game. Its contours are close (the tail doesn’t point up as much), and the bill could use more detail. Also, it doesn’t squeak when you squeeze it. It doesn’t even have a hole to let air in or out… This is for the purpose of avoiding mildew and bacteria forming on the inside like with normal squeezable squeaking ducks when used in/around water.

I’m not linking to the Amazon page for it - so as to not detract from IOI’s store. Anyone is free to search for it themselves and decide if they would like to get one.

Why make this post? IOI has had rubber ducks as promotional items in the past. They were likely outsourced to another company that supplied the ducks, then another (or perhaps the same) to apply any Hitman logo or branding on said ducks.

Maybe supplying the IO merch store with the same kind of ducks isn’t feasible. But I really feel like they’re missing out on this opportunity.

Heck. Even a smaller duck (maybe 1/5th?) with a loop or metal eye hook on the head for a keychain would be cool.

I got an email today advertising the new store. It appeared quite difficult to navigate, since all I could find initially was clothing, but I eventually found a collection of mugs and things: