I miss the old Hitman games. I feel that even though Hitman trilogy has achieved certain amount of success in new generation of games, and has managed to propagate consumer base, there is significant lack in character development / charisma / personality demonstration into 47’s character itself.
47 was glorious in olden days, even with lackluster graphics in those days, 47 spoke to your soul, made you fall into his stride and pride. Now 47 feels like castrated dog, and does not grow as a character at all in last 3 games.
What happened? What could be fixed if there would be any future full fledge Hitman games…

I think you’re not giving the modern Hitman games enough credit- Maybe because it’s easy to forget the plot (by design) thanks to its episodic nature rather than a campaign you replay.

IMO 47’s personality demonstration is on point across the whole WoA trilogy. Unlike Absolution where he barely feels like the same character at points, WoA does not skirt around the fact its main character is a sociopath, but still managed to give him a character arc. 47 goes from “who cares if someone got rich?” to trying to reconnect with an old friend he doesn’t remember how to enjoy the presence of anymore, to going back to assassinating people not because he has to, but because he’s started to believe he can make the world a better place by doing it, and that doing that at all has some value.

Could that story arc have been communicated better? Yes, and that’s why Silent Assassin is still probably the best Hitman plot, but if WoA had been executed better I don’t think you’d need to change it conceptually for its plot to vastly exceed Silent Assassin in quality.

Some people might argue he’s too goofy and they’re not without a point, but Tobias Rieper and jokes about being a murderer in disguise have been a thing since Codename 47 IIRC.

IMO if 47 had a few more lines in missions besides just talking to people (eg. conversing with diana while following mission story guidance), far fewer people would’ve had these complaints and he could’ve felt a lot smoother as a character.

Irrespective of whether H3 plot was better or not, 47’s character felt robotic at times in these recent games. Even though he is a hitman, there was certain amount of passion he had which was better communicated in earlier games through dialogues, scenes and game assets.

I feel the old Games had a better sense of humor, it was a bit more subtle, in the new games its like 50% of all lines are some joke or weird stuff.

I always liked the interactions with Agent Smith

47’s character felt robotic at times in these recent games. Even though he is a hitman, there was certain amount of passion he had which was better communicated in earlier games through dialogues, scenes and game assets.

i think he’s always been ‘robotic’. i’ve always found it pretty funny that he’s known for blending in seamlessly but is literally the worst at any human interaction.

have you got an example where he’s passionate, cos i’m wracking my brain for one?

My man what in the goddamn are you talking about, what i meant was the way 47 was animated in moments of comedy/dialogue. His weird rocking back and forth in c47 some intentional comedy moments in hitman 2, etc etc. I wasnt talking about the environment or cocks at all.

I feel the old Games had a better sense of humor, it was a bit more subtle

Ah yes, the classic games where a group of men in their underwear congratulate you for shooting a coin while in public.

I don’t miss the old Hitman games.
They’re still on my desktop and every gaming device that will have them. They will never go away.

No one considers BM a classic game. It was the game that ruined his character and degraded him from a complex person with inner turmoil and doubt about his place in the world, to a Terminator.

Regarding the characterisation of 47, the newer games pushes his character further in the same sense as Silent Assassin did. Especially H3 dives into his weakness through attachment. 47 takes rather huge decisions that upends the hole status quo. Other then SA, Absolution then the newer trilogy are the only games that have pushed his character in a more interesting direction, then the start point of C47. That said they often retread similar paths. 47 is a difficult character, by design he’s closed off and stoic. You can’t push his character to much without chaining something drastic and his overall traits stays the same. Silent Assassin pawed the way for a more humanised 47, but games like Blood Money forced him back into a more one dimensional role. That sadly many regards as the “norm”.

I feel the old Games had a better sense of humor, it was a bit more subtle, in the new games its like 50% of all lines are some joke or weird stuff.

The older games where full of humour, a lot of it is subtle and a majority of it will fly over the head of non Danish speakers. The newer games deliveries a lot of humour in form of gags, turning some of deaths into a punchline. Something that I feel often robs the kill of tension.

What is a Blood Money?

Thats because it isnt, its an intermediate game

What is a Blood Money?

Wait, what was I talking about? 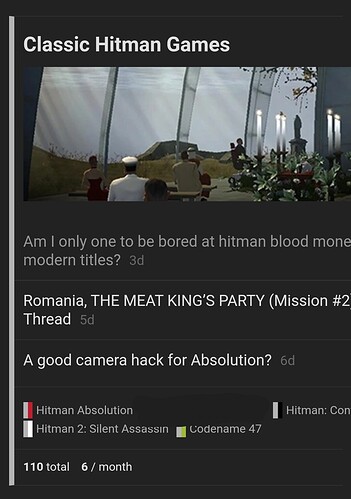 No one considers BM a classic game. running c47 at 40 fps on a voodoo 4, the CD-ROM drive spinning loud as fuck. Good times.

Me: sees all these so-called “Hitman fans” badmouthing Blood Money.

Aren’t you a little old to be larping