Home infiltration missions are my favourite type in the Hitman series. There’s something so personal and satisfying about approaching a target in a place where they’re at their most secure and at their most vulnerable. So, here’s a ranking of every property owned by a target from every game, from worst to best. Be sure to chip in with your own opinions in…the Great Hitman Target Homes Thread! 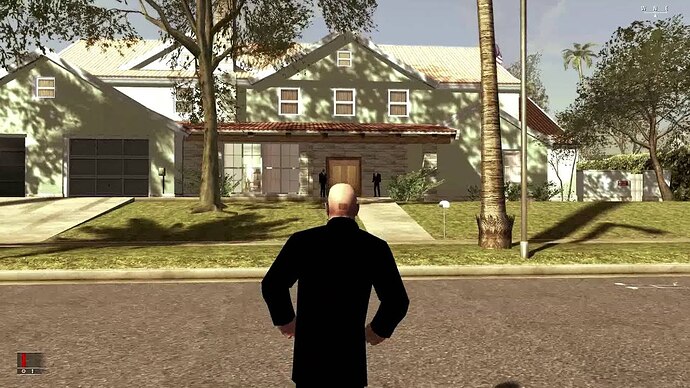 Vanya Shah’s trainyard (Hitman 2018)
What sort of queen holds court in an overgrown, disused trainyard? The Slum Queen , that’s who! Her royal carriage is pretty swanky, though.

The Osama Bin Laden lookalike’s little hut in Murder At The Bazaar (Silent Assassin)
Tiny shack with barely enough room for a bed.

Lee Hong’s mansion (Codename 47, Contracts)
It’s quite pleasant in Codename 47, but in Contracts Hong’s ‘mansion’ consists of a load of empty rooms which have no windows. He does have easy access to a Chinese restaurant and brothel, so that’s something, I guess.

Katsuyama-Jo (Silent Assassin)
Yakuza big cheese Hayamoto Sr lives in a large, fancy castle in a hidden valley (heh) which contains no windows, amenities or anything that allows people to actually live in it. It is instead full of annoying ninjas, squeaky floorboards and a weapons museum featuring the weakest, shittest pistol in the game.

Charlie Sidjan’s Petronas Towers penthouse (Silent Assassin)
Who needs a kitchen or a dining room or a proper bathroom when you can have an indoor hot tub, bikini ladies and a vibrating love-bed instead? That party animal Charlie sure knows how to live!

Himmelstein chateau (Hitman 2018)
A sprawling chateau which offers some lovely views of the Austrian Alps. It’s a shame we can’t actually explore it (except by using sneaky mods)

Blake Dexter’s Blackwater Park penthouse (Absolution)
There’s a theme with a lot of Hitman properties: No kitchen or bathrooms. Arms dealer and cowboy imbecile extraordinaire Blake Dexter owns a massive Chicago penthouse which has about twelve massive hallways, but no master bedroom. What a dunce.

Pablo’s compound (Codename 47)
Coked-out drug lord Pablo owns a rainforest compound which is both a mansion and a military base. Pablo is nearly constantly attacked by nearby tribesman, jaguars and Hitmen. Grim.

Diana’s mansion (Absolution)
Who would have thought Diana would live in such a salubrious ‘digs’? Nice art deco mansion on a cliff overlooking Chicago. However, Absolution’s linear level design means that the mansion’s layout makes no sense- If you look, the garden and greenhouse aren’t actually connected to the house, and for some reason, Victoria’s bedroom is at the end of a very long corridor with about three rooms before it. Oh, Absolution, you pile of turds.

Nolan Cassidy’s house (Hitman 2018)
Nolan ‘Cassie’ Cassidy shares his home with a bunch of men, and he has a collection of weapons which he’s too chicken to ever actually use. Lame.

Pappy LeBlanc’s mansion (Blood Money)
An antebellum Mississippi estate on a swamp island. Nice house and loads of boardwalks and wooden huts, but It sounds like absolute hell; alligators would forever be wandering onto the shore and the mosquitos would be endless.

Rico Delgado’s mansion (Hitman 2018)
Contrasted nicely with the poverty of nearby Santa Fortuna, this modern mansion has all the amenities that tasteless drug lords need- Rico possesses a torture room, biiig piles of money, hippo enclosures, gold-plated weaponry and a museum dedicated to himself.

Fernando Delgado’s hacienda (Blood Money)
Swanky Chilean villa overlooking a waterfall and river. Full of dead butterflies, paintings of 47 killing someone (?) and a bathroom with no bath or shower. Huh. Underground access to a drug lab and seaplane hangar, though.

Villa Borghese (Silent Assassin)
A Mafia manor overlooking the beautiful, polygonal Sicilian coast. As has been noted many times, the villa has no bathrooms or toilets. Presumably the Don pisses and bathes in the green pond in his garden. Eurgh.

Tyson Williams’ villa (Hitman 2018)
A villa on a tropical island in the Maldives, complete with home theatre, secret office, private beach, funky artwork, pools, an outside and inside bar, and a massive subterranean server farm. No kitchen.

Alma Reynard’s beach house (Hitman 2018)
Everyone’s ‘favourite’ Hitman 2018 mission, Nightcall, contains a fun little beachside mansion to explore. However, the bizarre artwork on the walls scares me, and so bumps the rating down.

Don Yates’ hacienda (Hitman 2021)
An Argentinian hacienda on top of a vineyard. Offers nice views of a lake, grape fields and…some horrible metal silos. Also boasts a spacious wine cellar used for evil meetings of world-controlling secret societies. Downsides? There’s only one bathroom, so whoever sleeps in the downstairs bedroom has to walk through the master suite to have a piss/turd. Or they can just do their business out of the window.

Beldingford Manor (Contracts)
The franchise’s best mission also has one of the best properties- outside we have a lake, hedge maze, tennis court, stables and inside we have secret passages, one-way mirrors, trigger-happy guards and peaceful night-time ambience. This manor is cosy and quaint. And haunted.

Vinnie Sinistra’s house (Blood Money)
This may seem like a weird choice compared to some of the bigger properties on the list, but Sinistra’s home is ideal; not too old, not too isolated, not too big and in a nice neighbourhood. It has an indoor pool, outdoor pool, sauna and all the luxuries/trappings of suburban America. I’d love to own a home like this.

Thornbridge Manor (Hitman 2021)
A sprawling estate in dreary, foggy Dartmoor. Thornbridge is Madam Carlisle’s ‘crib’ and is a delightfully old-timey manor with a family graveyard, parlour, trophy room, secret passages and a soundproof ‘scream as loud as you like’ room. It has more than a passing resemblance to Beldingford Manor and there’s a murder to solve as well. It loses points because, much like real life Britain, it’s endlessly grey .

Villa Caruso (Hitman 2016)
Silvio Caruso compensates for Villa Borghese’s lack of bathrooms by having no less than seven of them! This classical Italian manor has dozens of rooms, a seaplane hangar, bioweapon lab, castle ruins, infinity pool, observatory and more. Great fun to explore and discover. And it’s only a tiny portion of the Sapienza map! It hereby wins this crappy little contest of mine. Good stuff. 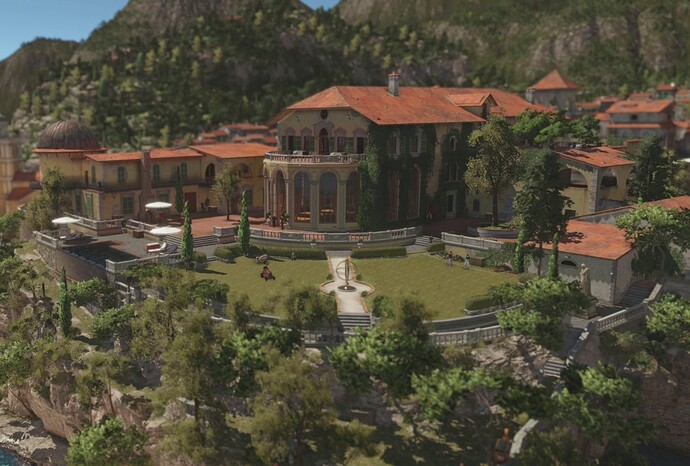 Plenty of bathrooms but not enough guestrooms

Also, it will only count when and if we get a bonus mission to whack Omar

Charlie Sidjan’s Petronas Towers penthouse (Silent Assassin)
Who needs a kitchen or a dining room or a proper bathroom when you can have an indoor hot tub,

yeah but the two toilets are facing each other. which is not right

However, Absolution’s linear level design means that the mansion’s layout makes no sense- If you look, the garden and greenhouse aren’t actually connected to the house, and for some reason, Victoria’s bedroom is at the end of a very long corridor with about three rooms before it. Oh, Absolution, you pile of turds.

This. The mansions layout is literally like a snake.
The size of the security room in comparison to the other rooms is insane too.
The mansion never suited diana in my opinion.

I don’t know if he actually lives there, but he has a bedroom so he can stay there for an extended time, but Omar Al Ghazali’s tower is pretty swish I’d say.

About Lorne de Havilland (extremely hate-able target), his room is odd to me. For being a millionaire, his bed looks like it’s hard as a rock. But I do like the Asian themed partition around his bed.