Hi here will be the costume thread from the whole trilogy. As in this image put all the suites including the exclusive ones (playstation, xbox, epic and stage). The other suits such as requiem and the ones that will come will be topical on that image. This is the model: 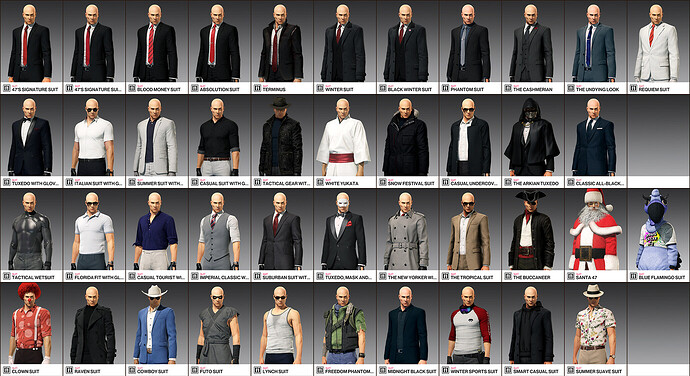 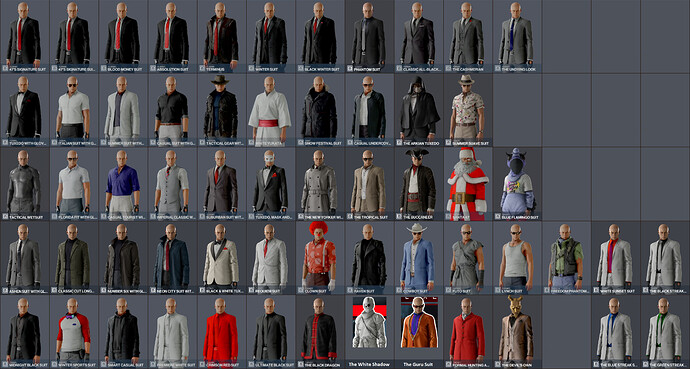 Quality of pictures isn’t the best because I don’t have the game myself but it’s better than nothing.

Link for the HD pics of suits?
And because you sent, you will update with HD pictures and those of future luxury escalations, etc. Or who will be offered.

Does anyone know, or IOI have acknowledged this, but if you’ve missed suits in H2, will we have the opportunity to obtain them in H3?

Reason I ask, I missed the opportunity to get 47’s signature suit with gloves in H2 so was wondering if I’ll be able to eventually get it in H3?

We don’t know yet. I suppose we’ll hear more about it next week or so.

I reaaaaaally want the Phantom suit! It looks so damn slick

If they release a WoA full pack.

Is there no platform-exclusive suit for Switch? Or is it just missing?

We don’t know yet. I suppose we’ll hear more about it next week or so.

What are all of the blank pictures for?

Why all suits have to be the same. I mean, yes, the NPCs react differently saying different things, but, for example, you shouldn’t be able to enter the bank dressed as a Flamingo. I think every suit should serve a different purpose other than being just a “Suit”.
“Hey, It’s just a Videogame!” Yes, but isn’t supposed to be realistic? Isn’t that the point of non fictional videogames, and even more so, on Hitman?

Blank space in bottom is for final deluxe suit.
As for rest… let’s say I believe that they’re gonna be filled during HITMAN III’s livespan

Blank space in bottom is for final deluxe suit.

Which suit is this exactly? Don’t know if I’m missing something?

This should be the suit from the last Deluxe Escalation in Berlin I guess. It wasn’t announced yet but all the other maps have their deluxe escalation, Berlin should be the next one.

People don’t want to be limited just because they like wearing a specific suit in-game. Like I love the red suit, it’s my favourite, if they made it more realistic it’d be easier to spot me within foliage and when trespassing on the beaches of Haven. But realistic doesn’t always trump predictable and understandable.

Of course that “doesn’t always”.

But most of the time.

This should be the suit from the last Deluxe Escalation in Berlin I guess. It wasn’t announced yet but all the other maps have their deluxe escalation, Berlin should be the next one.

Good thinking, I didn’t even think of that