How do I just play hm3 all the way through without exiting to menus between everything?

I tried asking on Reddit, people told me I was supposed to be doing it under the destinations tab (I’m not sure why the campaign wouldn’t be under the campaign tab but whatever), but that didn’t work either.

When you complete a mission, there will be a “continue story” tab. Just select it, and it will take you to the next mission.

There may be no “continue story” tab if:

Since Hitman levels are sandboxes designed for replayability, it makes perfect sense that you have a menu at the end of every mission. Most of the time people will want to play the level again and do things in a different way or explore more. Or, they have already completed the campaign and came back to play one level, and now it’s done they’re ready to exit to menu and jump into something else.

I just want to play it like every other video game

You must have a very narrow experience with games, as there are many games that behave similarly to this. I first think back to the Tony Hawk’s games on PS, which had a similar structure in that levels were made to be replayed over and over or switched between until you’re ready to select another one.

Gee, how incredibly helpful, thank you so much, you’ve made my experience in this game and in this community so much better by your mere presence.

Gee, how incredibly helpful, thank you so much, you’ve made my experience in this game and in this community so much better by your mere presence.

I always do, simply by not being a disrespectful jerk

When you complete a mission, there will be a “continue story” tab. Just select it, and it will take you to the next mission.

It should just be this. Finish a main mission, next mission card on the score screen at the end.

There’s not really a way to avoid menus between levels, given the whole game revolves around improving your score and tallying up challenges and Mastery of each level.

You were being a jerk tho

What made you think that? I took all the time to write a detailed explanation that addresses your comments as much as possible and gives a broader perspective. I didn’t intentionally try to condescend or get snarky or defensive. But sorry if it came across that way. 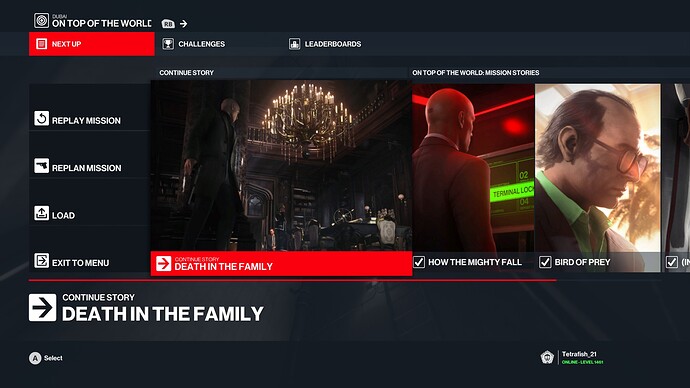 Because, believe it or not, people might want to retry the mission. They can do that via ‘REPLAY MISSION’ or ‘REPLAN MISSION’

They could even Load up from a later save point to retry from there. This might be to unlock other challenges and saves time by not starting the whole mission over again.

To get to the next mission it’s right there on the screen.

You’re not exiting unless you actually select ‘EXIT TO MENU’. You can press right to highlight the next mission, then press Select.

Edit: There will be a few missions with no ‘Next Mission’ to select. With those, yeah, you’ll need to return to the main menu.