How many entrances does the second last floor of dawood rangan tower have?

im looking to write a review comparing it to chongqing and how that map wasnt as well designed but dont have the game on me? how many ways to get to that floor are there? From what I remember:

I don’t think I will fully agree with your thesis, but nonetheless :

You listed them all, three stairs (two from office, one main service), two pipes (elevator from ground floor, and facade from 3rd floor).
Hitmaps is as useful as ever for that. 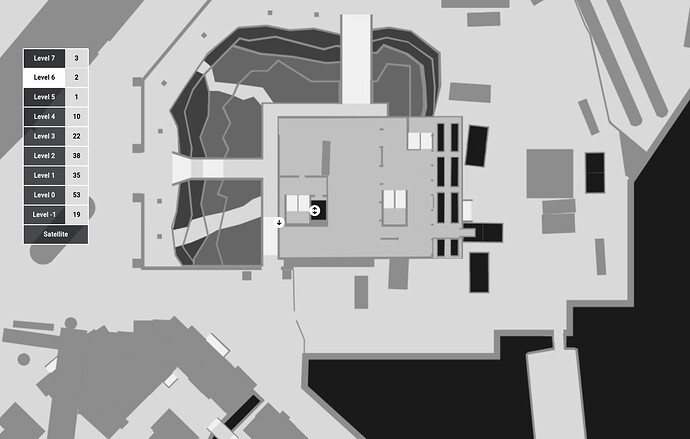 thanks, tho it’s difficult to determine if that pipe next to the stairs and elevator shaft can be counted as an independent entrance point as I have no idea if it can be accessed from floors below. I’m going to guess it can be accessed from the floors closer to the ground and chalk it up to about five entrance points (counting both stairwells as one for fairness)
My thesis, if I were to write it, is that a target like Hush is comparable to Rangan. Both have short loops where they patrol a top floor and then briefly go down a floor to talk to other NPCs. In Mumbai the sixth level has enough entry points to make a short loop like this workable by giving the player a lot of ways to get there at different points. Hush, by contrast, has about three entrances: the stair to the north, the stair to the south and the ladders to the west. One of the stairs include a pipe but it’s not a unique entrance point. The lotus passage COULD be a potential extra entrance but it cant be accessed within the block, so it’s kind of blocked off from the player. I would count it as a block entrance but not as a way of navigating from within the block
The thing with the block is that there is potential for it and many other areas to have more climbable sections, but for some reason a lot of these ‘Potential Pipes’ were blocked off and made non-climbable. Perhaps for balance reasons but overall it makes the Block feel generally mazelike despite its more compact, vertical design

When you say “2nd Last Floor”… I suppose to simplify or verify which floor you’re speaking of… Going by this reference; Is it the floor that has Mike on it?

Mike is the mole being interrogated by Rangan.

Or is it above? Below?

The pipe next to the elevator and service stairs start on level 3 (the storage area, next to makeup room) and can also be accessed by vaulting next to the photo shoot at level 4.

As for comparing the two maps : the Block is less open compared to the tower in terms of “from the ground to the upper floor”, but then there is the other hand.
I don’t think it’s fully fair to exclude the lotus passage. That itself has multiple ways to access (some very safe with choiced vaulting, if not evident).
The Block is also much more open as far as climbing in and out of windows on the same floor.

The tower basically works as “you access the floor vertically, now you are basically free on it, they are each pretty open”, while the Block still has some more challenge (well placed enforcers, how to access the bathroom, the meditation room, …)

Different, but I feel equal gameplay wise. (I nonetheless think that Chongqing has some issues, but not on the map design itself).

Yes that’s the one. I consider it sort of Rangan’s main stomping grounds

As for comparing the two maps : the Block is less open compared to the tower in terms of “from the ground to the upper floor”, but then there is the other hand.
I don’t think it’s fully fair to exclude the lotus passage. That itself has multiple ways to access (some very safe with choiced vaulting, if not evident).
The Block is also much more open as far as climbing in and out of windows on the same floor.

The lotus passage does have some good entrances yea, tho I will still say it falls into the Block’s problem of not having as many as would be obvious (like why cant we climb from the container in the restaurant onto a pipe and get to the roof?)
I feel like you do bring up a good point that these areas are blocked off for a reasonable challenge, tho I feel like at the same time some entrances are so easy they can trivialize that (that stairway that takes you from the bottom to the top behind that guard looking out the window. Free disguise plus easy access)