i’ve always had a lot of metal and grindcore ideas and band project ideas. but one i’ve always kept good in minds of is the name “Blitzkrieg Of Gore”. it would take inspirations from death, black, and thrash metal and have that low production quality of the old days of them but have an atmospheric feel of it like black metal would. i’ve probably said before i always wanted to be a metal vocalist before and would want to make a fresh new sound but stay close to the old days of metal music. so what about you guys and gals? Cold Black Slab. We’d be primarily a cover band, but our main specialty would be a blend of blues and rock. Not sure which denomination of rock, it would depend on who our key audience was, I guess. Might branch out into a bit of country now and then.

i probably wouldn’t call it let our enemies beware now. nah. ooo wiremother would be a good one!

Back when I did my chemistry degree - longer ago than I’d care to admit - I remember learning about The Jahn-Teller Distortion and thinking that would be a cool name for a band.

In terms of what we’d play, I don’t have a musical bone in my body so we’d be severely hamstrung there, but if I wasn’t utterly talentless in that direction then I see The Jahn-Teller Distortion playing some 65daysofstatic-like post-rock/electronica crossover.

Or a title to an episode of The Big Bang Theory.

really? huh small world. know a guy online who is in a band. name of it is Canavar. well two to be specific. Dek and Jack. played a lot of dark souls with Jack.

I’m too much of a hermit to even… So I guess more of a solo artist… Mmmmaybe another person with identical/similar taste to help and give feedback and ideas.

The name? Probably something associated with water, or maybe something referencing an astrological sign (not that I’m into any of that stuff). Maybe Pisces (something)? I don’t know. (Hope there isn’t already a band/artists already using that

I suppose the style/genre would be more of an Ambient (type) or Psybient, maybe a few chants/mantras, electronic mixed with flutes, or other types of organic instruments (hang/tank drums, chimes, etc.). I’m talking Flower of Life stuff here. It’d be more for zoning out, meditating, or getting into the zone. Thinking of the ‘water’ theme for the name… Something to get you into a flow state.

either way pretty cool to run into another one.

to add more to this thread i really want this t-shirt but i tend to be a tightwad with money and don’t want to have an addiction buying band merch. 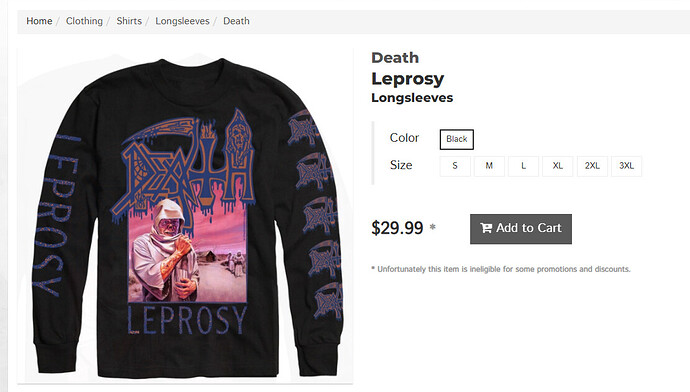 image1111×632 115 KB
also you guys think it’s normal for a Christian to be into metal and grindcore since i’ve hinted and mentioned my faith many times? i also have a black Metallica hoodie that has a sort of green logo design which i can’t tell is grass stains or a distressed design. be nice to add a bit to my collection.
1 Like
Tetrafish_21 October 1, 2022, 1:25pm #14

also you guys think it’s normal for a Christian to be into metal and grindcore since i’ve hinted and mentioned my faith many times?

My brother in Christ

…It does seem a bit unusual. I can’t say I’ve ever personally met a professing Christian that was into heavy metal (not yet anyway). But I’m certain there are others that proclaim this faith that would be troubled at some of the things I partake in.

It’s been many years ago, but I recall seeing a guy that had tattoos, numerous piercings, and a long mohawk (or something like that)… But was also wearing a cross and his shirt had a logo or graphic from the church he went to.

Needless to say I couldn’t help but to give a

but I recall seeing a guy that had tattoos, numerous piercings, and a long mohawk

You’ve just described everyone at my local pub

You’ve just described most of my friends

My brother in Christ

…It does seem a bit unusual. I can’t say I’ve ever personally met a professing Christian that was into heavy metal (not yet anyway). But I’m certain there are others that proclaim this faith that would be troubled at some of the things I partake in.

well you met one today. for me i came bit by bit to all the genres of it and liking them. mostly things like slayer, Metallica, and nu-metal were starting points. would slowly learn of death metal down the road and slowly got used to the pretty harsh lyrics and imagery. would take a trip back in time to learn of the glory days of the genre with Iron Maiden, Judas priest, and to me a pretty good traditional heavy metal band Grim Reaper. i would start to listen to the grindcore and gore/deathgrind bands and become use to the noise and more harsh production of it all. so yeah a pretty long journey of diving into a genre i feel isn’t plastic like most music nowadays or sanitized so hard and speaks of pure material vanity and crappy get rich quick lifestyles. also what would be the troubling things?

Lh47, If you select a specific font, you get an ambigram.

i just thought of a name for a dsbm band but if they were from Japan. probably would be called “Vainful Seppuku” or “Vain Seppuku”.

I LITERALLY JUST REALISED THIS WAS A PUN WHILE EATING MY DINNER LMAO. Years later. Slow as shit