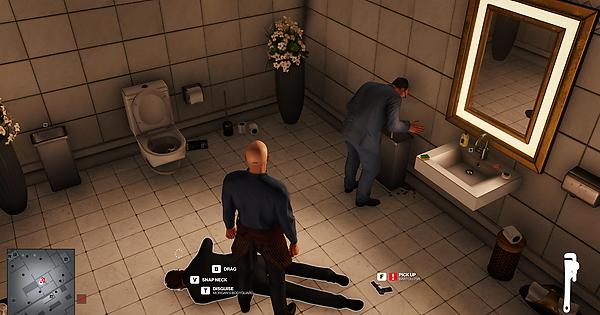 A bit of background on the image above: at first I poisoned the food with emetic poison, Ken ate it, then decided to puke in the garbage can at the reception desk instead of going to the bathroom, which is basically the exact same distance if not closer. I reloaded a save, but the food was already poisoned, he ate it, and THIS time chooses to go to the bathroom. He walks right up to the toilet, STOPS then goes for the garbage can next to the sink.

What the hell?! This has got to be some kind of bug, right? Admittedly I haven’t really played Bangkok since Season 1, but I don’t remember this absurd behavior EVER happening back then, and I played a ton of it in Season 1.

Yes, NPC preferring trash cans over toilets is a bug that appeared after one of last HITMAN 2 updates.
Developers say they are now close to the solution of fixing this, but how will they fix it and when it happens - currently unknown.
Let’s just hope it will be eventually fixed and won’t break the rest of the game

Wow, such a quick reply. Thanks a lot for the info, I didn’t know they had announced that they were close to a solution. It’s CRAZY that this bug has existed since one of the last HITMAN 2 updates, though.

I agree, but that’s what we have.
It’s from yesterday’s patch notes:

Backlog: NPCs Ignore Toilets
We’re aware of a long-standing legacy issue where NPCs that are affected by emetic poison would prefer to use a bin/trash can rather than the toilet to throw up. We’re close to a resolution for this issue that will mean that affected NPCs will use the more logical and “challenge-completion-friendly” option more often. Stay tuned for updates.

Ah, thanks again for this, it’s great to hear.

Can’t let a thread titled “This is ridiculous” pass without adding a “I have business on the hill” reply.

Honestly, just get rid of trashcans near the obvious emetic routes. I’ve hardly ever used them and just drop guns in bushes or whatever.

Stashing weapons and items is precisely why they shouldn’t be removed, and the issue should just be correct properly (which is being done, apparently).

Funny thing is, I’m pretty sure Ken Morgan is probably the one example that doesn’t usually apply to the toilets v trashcan problem so many NPCs can run into.

When you poison the food, he has always (since the original Bangkok episodic release) gone to the trashcan in reception to throw up. This is intended so that you can take him out with the accident kill by dropping the coconuts on him, which also leads into a challenge where you do that same kill on both targets. Ironically the bug in this instance is him going to the bathroom at all after sampling the food.

Huh, that’s wild. I feel like back in Season 1 I poisoned him all the time and he would still go to the bathroom.

Yep, I was gonna say this. Also I started over on challenges and last patch at least he went to the trash can as he should.