What’s the longest anyone ever spent on a level not counting pauses and loads? Saves loaded must revert to time save was made.

I’ve seen a couple player made contracts on Xbox where some of the low level times were like an hour and a half/an hour and forty five minutes. First place? Less than a minute.

What of high level times?

The only way we’d know what the longest time in a level is if someone records it all.

The in-game background timer actually resets at 24 hours exactly, so you get insane speedruns like this:
(This is also to my knowledge the longest time one person has spent in a level) What of high level times?

I meant those were some of the longest times I saw someone play. But I think that 100 hours demolished that. HA!

Longest day or longest night. Nothing ever changes with time of day nor NPC behavior. I think at least one guest female staying at the Himmapan Hotel has taken notice of how things never change.

Or am I missing something obvious?

I’m guessing that the default Berlin exit doesn’t stop counting game seconds until you get to the results/challenge screen. I counted about 20, 21 seconds after they passed through the fence, checks out.

It’s one of the only exits that “exits” you without needing to press a button, so I assume that the in-game cutscene still counts as game time.

Maybe the ending cutscene is adding the 23 seconds because it’s so bugged!? Chongqing does that (also bugged) when you use the exit near the data core.

Interesting, it registers as 5 stars SA but the leaderboard is like “nope! You’re 5060 here!” So it’s a pointless speedrun.

If I were to guess it’d be around 3 to 4 hours. Most likely just d’ing around or doing a Kill-All.

Environmental changes in a level (not day to night level of change) do exist in one level.

On the Maldives/Haven level, a storm does roll in about the 25-30 minute mark. As far as I’ve experienced, the storm doesn’t go away. Nice touches in the level such as strong winds blowing curtains and trees bending.

Most people probably never see this, as they probably finish the level long before the storm hits.

I think most people noticed the weather change in Haven, cause the storm triggers shortly after you eliminate two of the targets and you’d only miss it if you were doing a really fast speedrun.

The weather change on Haven Island triggers after you eliminate two targets.

Nope. As it has changed on me without eliminating any targets. 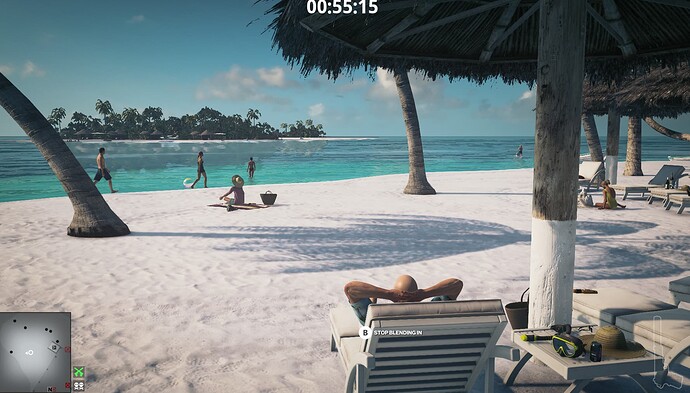