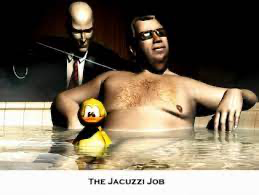 This level in my honest opinion is the best one(before showgun showdown). The atmosphere plus the kickass soundtrack just makes the level so atmospheric

How sexy is a Loadingscreen allowed to be? 10/10

A favourite, to be sure. I like how it’s relatively linear but doesn’t lose quality for it. I like all the Malaysian missions, actually.

I like it bc it follows my “anything once” rule. 47 has to make it look like a robbery gone bad. Of course you can still get SA which would probably throw off the whole robbery gone bad vibe, plus his twin also turns up dead in the basement, but if you take out the guards and take the level completely by itself the story line fits

The side objectives are not aggravating (likely bc of how small the level is) and it’s just overall a lot of fun. I love the guard who plays piano and the bikini girls who all go to the bathroom together and magically carry revolvers in their ??thongs?? ?? tops?? No idea but it made me laugh and the night vision too was pretty fun in that level bc of how it worked with guards trying to fix the lights. Actually I think they did this again in contracts with Hunter and Hunted, right?

I just thought of this on my last replay. In later games, 47 still has the reputation of a ghost who nobody ever catches, so it feels like SA is the canon ending of every hit. But Jacuzzi Job must be the most bizarre robbery gone wrong in human history. Two brothers killed, quietly and unseen, and some money and a piece of art go missing.

I see you’re unfamiliar with Malaysian 3rd Base.

Never been to Malaysia, but I have been to Thailand. Is Malaysian 3rd base similar to 2nd base in Bangkok ??

Is Malaysian 3rd base similar to 2nd base in Bangkok ??

I always liked the fact that this mission took place solely because of the twin factor. We don’t really which one is actually Charlie, although we know which one is using the name, and we don’t know which one really made the software that Sergei needed for his weapon to work, or if they were in it together with one doing the work and the other taking the credit. Either way, it doesn’t matter; 47 was hired to take out Charlie, and there’s an identical twin involved, and nobody gave him that info until after he’d taken one of them out. To make sure he fulfilled the contract, he would have had to take out the other brother, lacking proper confirmation. Plus, Diana would have had to let the client (Sergei) know about the twin situation and he likely would have altered the contract on the spot anyway to make sure.

he would have had to take out the other brother

nice short level in a small area, can’t think of any others quite like it.
I also like how it combines with the preceding 2 levels, it all flows together with 47 working his way up the skyscraper from the basement to the top floor penthouse