This should be interesting. Male version in the making

For most attractive, based on my preferences, going with Ljudmila Vetrova, with Andrea Martinez running a close second.

good choices. also with a name like vetrova you think she’d have a Russian or Slavic accent.

Athena Savalas and Alexa are the most attractive women in WOA, not even a debate

Hey, this is based off of attractiveness, not how interesting they are. These two luscious ladies are lookers, but hollow shells compared to Imogen’s depth (not a euphemism). 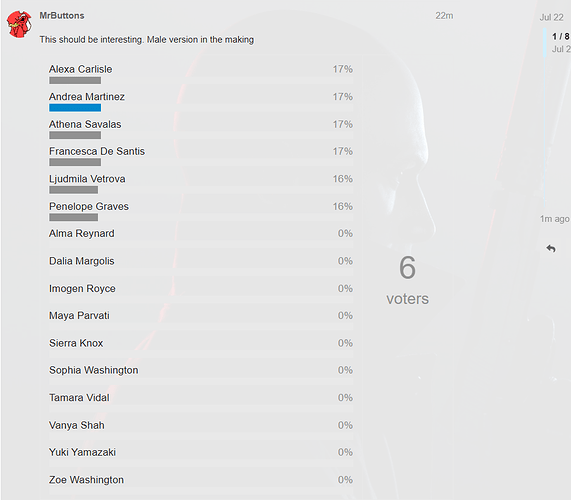 Eh, I dunno @Agent_MJ, her smoking habit brings it down considerably.

last one i’d hope. cause it sounds the most logical. also i guess that’s fair. never found smoking as a think to turn my head.

Yeah, and I can’t remember if Ljudmila smokes or not, but if so, it’s not emphasized like it is with Yuki.

Penelope Graves reminds me of a girl I once dated, so a heavily biased vote for her.

Dalia is my runner-up.

guess a lot of people and me have a thing for gorgeous Hispanic women.

Smh you’re just voting for Martinez because of her choice of attire.

not just that but the curves. a woman with curves and meat on her is what makes her my pick. also Ljudmila is a good choice too.

I think a phone call with her beau Pietro reveals her English accent is fake.

@scoobywizard, ha! I agree on that one

No, although that’s a plus (that neckline is plunging). Her figure and her voice are also attractive, and it helps that her face is much better now than it was at the Paris auction in H1.

who was at the Paris auction?