My ideas to improve Hitman’s inventory

First of all, I’d like to say that H3’s levels are probably the best in the entire trilogy. Then again, what I liked a lot less is that the unlocks are really disappointing. On one hand, the trilogy doesn’t really need more items. It pretty much has all the basics. On the other hand, it’s a bit of a bummer to finally have the ability to carry over items from the last five years of Hitman, but that the inventory itself is kind of underwhelming. There is still a lot of room to improve items and add more variety! I really hope the devs take some time post-release do it!

Without further ado, here are some ideas in a big wall of text:

All of the above is just maintenance, as Edwards would say. There’s still time to add cool new stuff like:

So yeah, thanks for reading. Any comments or ideas?

I’d just like to say: I’ve been wanting the possibility to aerosolize the poisons, using your briefcase as the distribution-device. Making the briefcase an even more useful item.

Other than that I would like weapon customization for certain weapons (such as the Kalmer). Where you can pick and choose and mix between two (because there are only to darts in that weapon) poisons as you wish.

Now that thats out of the way, there is nothing left for me to say other than: I wholeheartedly support your ideas for changes. I actually kind of dislikes what a mess my inventory looks like. That’s not even all; in H2 I unlocked the ICA Titanium Crowbar for progress transfer to H3, and then IOI made the same crowbar a Mastery unlock in Whittleton H3. What happens when/if I can be bothered to grind Mastery 20 on that map? I get TWO ICA Titanium Crowbars? I mean, it is by far a favourite item of mine - but there is no need for two…

Great ideas, but never gonna happen. Just watch how they develop whole contract mode or items in this game since 2016. No changes at all, it was messy and it’s messy and they won’t do a thing because they all what they want to focus on new project. They even didn’t announce any live content or post DLCs! (ok there was an article but that isn’t any statement that they will do anything)

If they would to make a improvements they would have done it long time ago. I Have tons of ideas how to improve an equpimenet because I can’t look how that game is polished if comes to gameplay and level design, but not whole mastery and equipement system which is a pure mess.

There is only two things missing in this game which could make it a pure perfection. Mastery/Equipement system and lack of Native Speakers. Everything beside that is perfect.

I’d just like to say: I’ve been wanting the possibility to aerosolize the poisons, using your briefcase as the distribution-device. Making the briefcase an even more useful item.

There’s already an emetic gas item and yes, you can use it inside a briefcase

You talking about the Emetic Gas Grenade (or EGG)? I haven’t been able to make it work. I throw and I throw, but no gas comes out.

Try the Remote Emetic Device. Stick it in the briefcase and activate the plunger.

One of the things that got me thinking about this topic is a review I read a while ago: 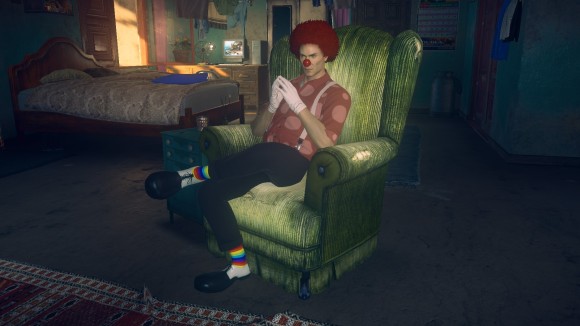 I think it’s fine for Hitman to be a heavily stealth-focused game. Thematically the restrictions around who you can and can’t kill even give 47 a strict moral code and make him into a likeable protagonist, which is helped along by some fantastic writing and line delivery — if you like your humour black, then the dialogue along with the kill methods will make Hitman 2 one of the funniest games you play this year. That’s a significant achievement for a genetically-engineered clone assassin who is supposed to have had all of the emotion scrubbed out of him at an early age. However, the thing I found a little curious about the stealth conditions is that unlike other games in the genre Hitman doesn’t give you many stealth-focused gadgets; I’d say that probably two-thirds of the equipment unlocks in the game are either guns or explosives that are all but useless on 95% of the runs you’ll be wanting to do. The primary function of a gun in Hitman is to get NPCs to look in the direction of the bullet impact, or to destroy items from a distance, and the default silenced pistol the game starts you with does both of these things perfectly well.

So, given the choice that Hitman has made to value stealth over all else, why does it give you so many unlocks that are functionally useless for this playstyle? I have two theories about this, both of which are probably true. First is that freeform stealth-oriented games are a bit of a tricky sell these days and that cramming your game full of guns will at least create a more comfortable environment for an audience that’s used to their primary mode of interaction with a game world being to shoot its inhabitants in the face. Second is that Hitman ’s levels might be an absurdly detailed set of puzzle boxes, but the puzzles need to both be solvable regardless of what you take into the level with you, and at the same time remain challenging regardless of what you take into the level with you. Those conditions are almost mutually exclusive, and the only way Hitman 2 can really satisfy both of them is to drastically limit the range of utility equipment that can be used in a stealthy run and make the levels as self-contained as possible. It’s more than a bit of a kludge, but I’m hesitant to say it’s a mistake because I can’t think of an alternative way to reconcile the kind of game Hitman is with a more satisfying equipment system.

He’s pretty much spot on. Equipment is what it is in the Hitman trilogy because of some high-level design decisions.

What I’d add to this is that since you’re only up against regular ol’ humans and that you’re not actually supposed to kill them, there’s only so much you can do to differentiate guns, although MGSV did do quite a lot with similar restrictions (ex: rubber bullets, underbarrel attachments).

That 47 can kill and subdue with his bare hands also makes melee items a lot less important. Thrown items are all as lethal (or non-lethal) as any other… and as far as I can tell there’s no difference in throwing distance? Maybe that’s one thing that could be tweaked, but it’s probably now too late and too risky to mess with the mechanics in any significant way.

Still, despite the inherent limitations, there’s a lot that could be done to spice things up a bit.

full agree!
i offen ask IOI to add some features but they not listen us(

Yes you can use it but after it explodes it leave traces that NPCs will identify as weapon and report to guards forever. Really disappointed that this bug has not been fixed yet.

I hope the February patch solves at least the most obvious issues with items. Working tiers for the H3 Featured Contracts would be nice too!

Some people have said it elsewhere, but the ICA 19 Covert doesn’t actually seem to be silenced. The Pale one doesn’t start with a full magazine, which seems like a bug. Not sure about the black one.

The Breaching Charge Mk III states twice that it has the signature Mk III look. When you really need to make sure they know…

I also noticed that many items aren’t where they should logically be in the item order.